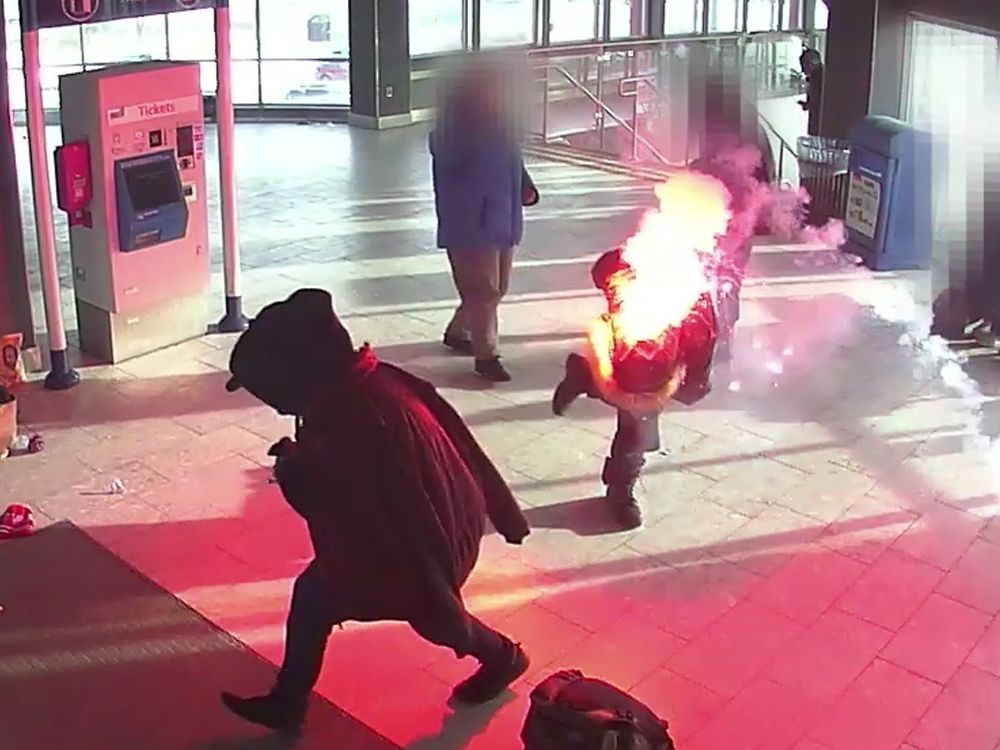 Calgary police have charged one man and are searching for three others after what they called a “reckless assault” at a northeast Calgary CTrain station last week.

Police said a group of four men were part of a physical altercation in the upper level of the Marlborough CTrain station at about 2:15 pm on Nov. 17.

The violence escalated, investigators said, with suspects brandishing a pipe and a knife as citizens attempted to leave the area. In security camera footage released by police, one man can be seen repeatedly striking another with a pipe.

Soon after, one of the men returned to the upper level of the station with a flare gun and fired it twice, briefly lighting one of the other suspect’s jackets on fire.

With help of Calgary Transit staff, police arrested a man suspected of firing the flare gun at the Franklin LRT station after he left the Marlborough on a departing CTrain. They also seized the gun.

They identified the suspect as Evan Robert Mossing, 37, of Calgary. Mossing faces seven firearms charges, including discharging a firearm with intent while being reckless, possession of a weapon for a dangerous purpose and careless use of a firearm. He was released from custody following a bail hearing and will next appear in court Dec. 13.

In a news release, Calgary Police Service Acting Staff Sgt. Shelby Stewart expressed concern about the public nature of the violence, which happened in daylight at a public-transit hub.

“This display of violence happened in a busy public area, was extremely reckless, and will not be tolerated,” Stewart said.

“Calgarians deserve to feel safe as they move about the city and we continue to work with our partners, including Calgary Transit, to address this type of ongoing violence.”

Police also issued a plea for the public’s help in identifying the other three men allegedly involved in the assault, who were captured on closed-circuit cameras at the station. They issued the following descriptions of the suspects:

Investigators ask those with information to call the police non-emergency line at 403-266-1234. Anonymous tips can also be submitted to Crime Stoppers at 1-800-222-8477 or calgarycrimestoppers.org.