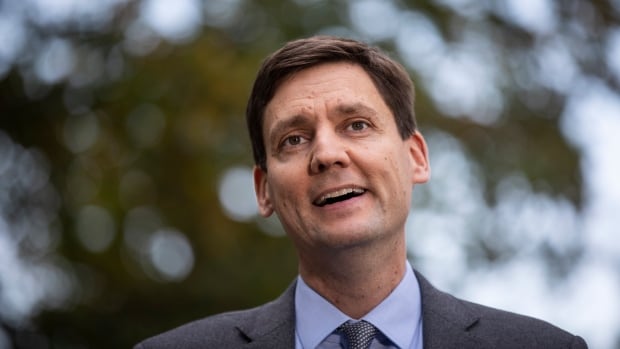 Patrick Eby remembers the day his older brother dragged their younger brother to the circus.

He thought David, barely a teenager, was taking Matthew, no older than eight, to the big top for some fun near their childhood home in Kitchener, Ont.

It wasn’t the case — David wanted to protest the way the circus elephants were being treated.

“I often do come back to that memory as one of the first steps toward what he was trying to do, with advocacy for those groups that he tirelessly works for and tries to help support,” said Patrick, speaking in an interview from his home in Ontario.

“When he sets his mind to something, that’s what he’s going to try and accomplish.”

Eby, 46, will take the latest step in his career when he’s sworn in as BC’s 37th premier on Friday — a trajectory that’s seen him rise from high school council president to protest, to activist, to civil rights lawyer and career politician favored for the province’s highest legislative office.

It’s a path that doesn’t surprise his family and colleagues.

Eby was born in Kitchener, Ont., in 1976. His mother was a high school principal, and his father was a lawyer.

The oldest of four siblings, he stood out for his leadership and studious side.

After high school — where he was elected student council president — Eby earned his undergraduate degree in “rhetoric and professional writing” from the University of Waterloo in 1999, logically choosing his hometown university “because he liked the convenience of living at home while going to school.”

After graduation, he worked briefly as a tech writer for various companies before leaving home to pursue his law degree at Dalhousie University in Halifax.

Long before he started down the road to provincial politics, Eby was an outspoken advocate on progressive issues as a lawyer with the Pivot Legal Society in the Downtown Eastside from 2005 to 2008. During that time, he advocated for the rights of Vancouver’s homeless residents.

He then became the executive director of the BC Civil Liberties Association, fighting for police accountability. He also wrote a how-to guide on people’s rights during arrests and suing police in small claims court.

First in Vancouver’s 2008 municipal election. Followed by the 2011 provincial byelection, which saw him as the BC NDP candidate for Vancouver-Point Grey. He lost to then-first Christy Clark by less than 600 votes.

In 2013, the stage was set for a rematch. This time, however, Eby won with 47 per cent of the vote, toppling the premier.

He has since been re-elected twice.

Since 2017, Eby has served as attorney general. His tenure was highlighted by a series of headline-grabbing policies, including his investigation and inquiry into money laundering, a ban on corporate and union political donations and reforms of — what he called — the ICBC “dumpster fire.”

After the last election, Eby also took over the housing portfolio.

In the legislature, his political opponents have long recognized his intelligence.

“As a competitor…he is a worthy adversary in the course of debate. You better be prepared,” said Mike De Jong, the official Opposition critic for the attorney general.

But that recognition is also tempered by critique. De Jong believes Eby was the most partisan attorney general in his memory, adding that his confidence can often come across as arrogance.

He calls Eby’s run as AG a disaster.

“The degree to which British Columbians feel less safe today than they did five years ago is palpable.”

Eby has said he wants to hit the ground running in the legislature, immediately introducing legislation to tackle pressing issues like housing, health care and public safety.

But with only four days remaining in the legislative session after he takes office, there’s concern among the Opposition Eby will attempt to push through legislation without proper scrutiny.

“I can assure you we will make a lot of noise about that if he tries to jam something through without proper debate and discussion,” said BC Liberal leader Kevin Falcon.

In a speech Friday, David Eby laid out his priorities for when he becomes premier of BC which include housing, health care and public safety.

Eby is replacing John Horgan, 63, BC’s first two-term NDP premier, who announced in June he was stepping down after recovering from throat cancer.

He was acclaimed as the leader of the NDP after his only rival in the race, activist Anjali Appadurai, was disqualified following an investigation into her campaign’s conduct.

Eby will be sworn in as premier on Friday at the Musqueam Community Center in Vancouver.

He lives in the area with his wife, Cailey, and their two children. His brother Patrick says he’s always made a point of setting boundaries to protect his personal time as best he can, even as his professional life has evolved.

“Over the years you’ve seen, as his career’s unfolded and the work that he’s done, he definitely has not taken his foot off the gas. He’s there for his family, and he’s got his family time.