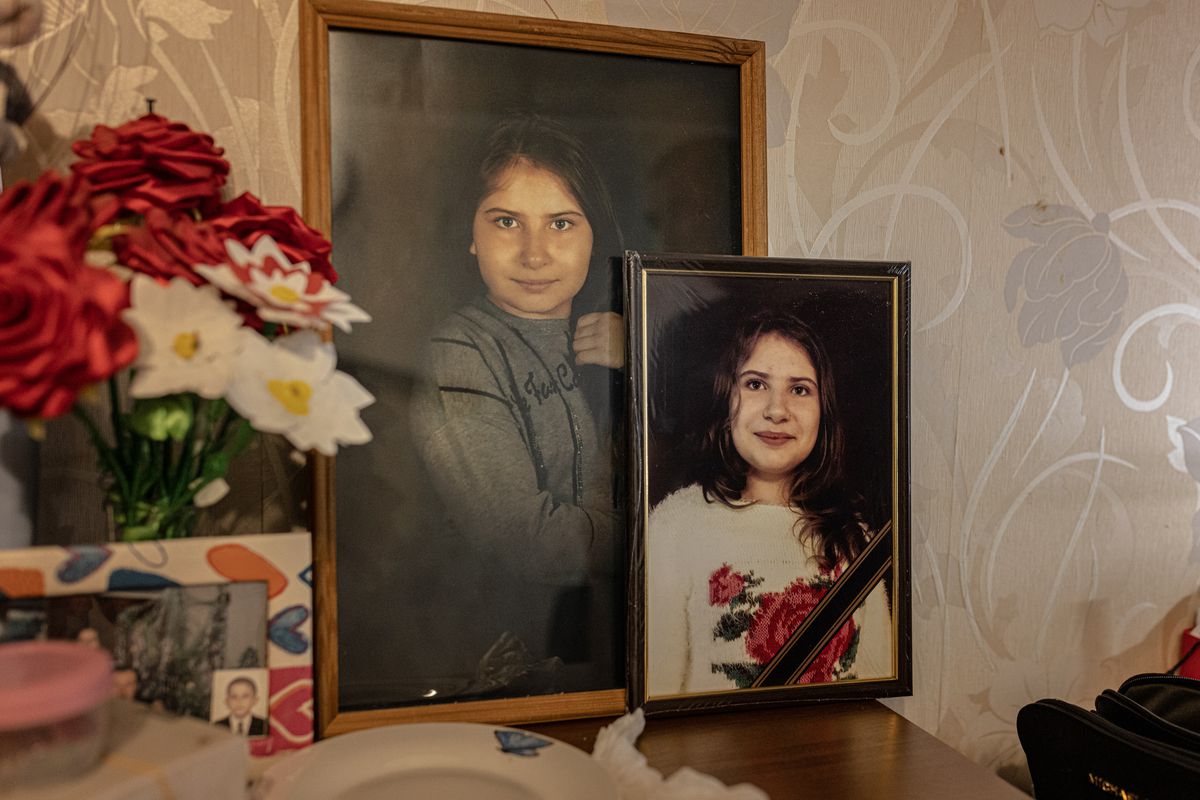 Anastasiya Hrytsenko stayed home alone on Saturday morning, while her parents out went to buy some food that they planned to deliver to poorer neighbours. There was a kitten that liked to visit their yard, and the 11-year-old wanted to play with it.

Around lunchtime, a Russian S-300 missile smashed into the Hrytsenko family’s brick bungalow in this working-class city in Eastern Ukraine. Within an hour, Anastasiya was dead. At the scene of the attack, the only traces of the fourth grader’s life on Saturday were a purple Sofia The First notebook – filled with cheerful doodles and homework done in flowery handwriting – and a pair of deflated soccer balls amid the rain-soaked wreckage of No. 2 Bohdan Khmelnytsky Street.

Her parents have only their memories, beautiful and awful. “I want to remember her as she was, smiling and laughing. Not how I saw her yesterday, after she had been thrown through two walls of a building,” said Anastasiya’s father, Andriy. “I want people to know that this baby was supposed to live. She did no harm to anyone. She was so young. She was supposed to live much longer.”

Anastasiya’s mother, Irina, wept uncontrollably as Mr. Hrytsenko flicked through photos of their daughter’s life on his phone on Sunday. Their swaddled infant had grown into a sporty girl with chestnut eyes and wavy brown hair. “This can’t be,” Ms. Hrytsenko said between gasping sobs. “My little girl. My treasure.”

Anastasiya is one of at least 376 Ukrainian children killed since the start of Russia’s invasion, according to the Office of the UN High Commissioner for Human Rights. The OHCHR says the figure is almost certainly a dramatic undercount since it’s not known how many children have died in areas that are near the front line, or under Russian occupation.

The bodies of several children exhumed at a makeshift cemetery discovered last week in a forest outside the nearby city of Izyum – where more than 440 people were buried during the six months it was under Russian control – are not yet included in the OHCHR count.

Despite the family’s raw grievance, Mr. Hrytsenko agreed to talk to The Globe and Mail because he hoped telling his daughter’s story would somehow help bring an end to the suffering being inflicted on his country. “I wish that no one else has the destiny of my family, whether they’re in Russia, Ukraine, or anywhere else in the world. Such things shouldn’t happen.”

Now their only child is dead, the victim of two recent contortions of Russia’s war against Ukraine.

One is a campaign of missile attacks targeting civilian infrastructure, ordered by Russian President Vladimir Putin in apparent revenge for this month’s Ukrainian counteroffensive, which has liberated a broad swathe of territory just east of Chuguiv. The other factor is Russia’s dwindling supply of precision weaponry.

The Hrytsenko house sat beside an oil storage facility Russia had bombed and largely destroyed in April. Because the depot had already been hit, neighbors believed it wouldn’t be attacked again.

The Hrytsenkos, who also have an apartment in the nearby city Kharkiv, where both parents worked at a clothing factory before the war, started spending more and more time in Chugiv. They felt it was safer than Kharkiv, which is targeted daily by Russian attacks.

Neighbors in Chuguiv say there were two big blasts just after noon on Saturday. The first S-300 missed its target and destroyed No. 2 Bohdan Khmelnytsky Street. The second struck the oil depot.

The S-300s are anti-aircraft missiles. Military analysts say the fact Russia has been using them against cities suggests the Russian military is running out of better weapons, after firing more than 4,000 missiles and rockets during the first 200-plus days of this war.

A salvo of nine missiles was fired at Chuguiv on Saturday. When the attack started, Mr. Hrytsenko called Anastasiya to tell her to take cover. “I told her to hide. She said: ‘I’m already running.’” Then the line was cut.

Mr. Hrytsenko’s next call was to his neighbour, Serhiy Soyenko, to ask him to check on his daughter. “He said: ‘Stop what you’re doing and come here, because you don’t have a home any more.’”

The explosion had blown Anastasiya right out of her house and flung her against the fence of the neighbours’ yard.

Yaroslava Reshetniak, who lives next door at No. 4, said she and her mother took cover as the force of the blasts tore the roof off their two-storey home. A brick from Anastasiya’s house flew through one wall of Ms. Reshetniak’s house and embedded itself in another. “I don’t know how we survived.”

Another brick flew over No. 4 and struck 73-year-old Nina Vasilyuk, who lives at No. 6, in the hip. She was hospitalized.

When it was safe to look outside, Ms. Reshetniak and her mother found Anastasiya still alive, but covered in blood, with broken bones sticking out of her. She was asking for her mother and begging for a drink of water, Ms. Reshetniak said. They gave her some water and called her parents, as well as an ambulance.

The parents arrived before the medics. The little girl tried to console her mother, telling her she would be okay despite the gravity of her wounds. The ambulance arrived shortly afterwards, but half an hour later Mr. Hrytsenko called his neighbors to tell them Anastasiya had died.

“It’s worse than a nightmare. There was a child in the morning, and she was gone at noon,” said Ms. Reshetniak’s mother, Larisa Petrenko.

Mr. Hrytsenko said he had tried to shield Anastasiya from the horrors of the war that killed her, focusing on telling her how to stay safe. “I didn’t want to tell her the terrible things that were happening and to traumatize her. To be honest, I don’t understand this war myself.”