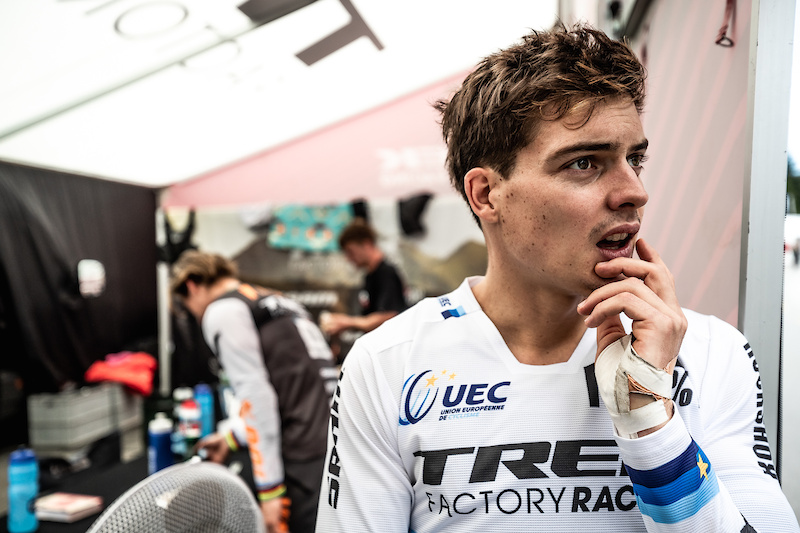 With so many questions still remaining, it’s likely that 2023 will look a lot different from what we’re all used to. Our last Racing Rumors article laid out some of what’s expected, including a long-discussed racer’s union, a smaller finals field at World Cups, no commentary from Rob Warner at those World Cups, and a big hike in registration fees for factory-level teams . Those headlines will no doubt make for a very different season next year, but they’re not the only rumors we’ve heard…

Below are a few more pieces of gossip, from racing news to business dealings. As always, these are well sourced rumors only, with varying degrees of confidence. We’ve reached out for comment to all involved and will update this article as we learn more.

The World Cup will always be amazing, but did you watch Hardline this year? One of the rowdiest races ever conceived, this year’s Red Bull Hardline saw riders face multiple 90-foot jumps, massive rhythm sections, a monster-sized step-down, and some of the roughest, steepest trail that’s ever been put between course tape. If World Cup downhill racing is the Formula One of our sport, Hardline is more like a cross between King of the Hammers and WRC, or akin to Rampage being a timed race but there are also a few hundred trees that you really want to avoid.

Just imagine if there was a Hardline series next year…

We’ve heard whispers about exactly that, and given that Red Bull isn’t involved with that other world-traveling series anymore, it sure seems like a rumor that makes a bit of sense. With so few World Cup races each season and annoyingly long gaps between many of them, one could easily argue that there’s room for another top-drawer series. Especially so if it’s different enough from the norm, which Hardline certainly is. While a World Cup has more limitations and and sees much more traffic, Red Bull doesn’t need to play to the same rules. Would Val di Sole be scary for the average rider to get down, let alone race? Of course, but the size of Hardline’s gaps makes it a very different challenge, and an entire series full of them would no doubt attract a lot of attention. And what if Rob Warner was the commentator?

Unsurprisingly, Red Bull didn’t want to comment at this point, but we’ll see what happens down the road.

Back in 2013, a small Canadian company called OneUp debuted its first product, a range-extending cog for 10-speed drivetrains. That very green cog made a lot of sense, and since then OneUp has gone on to make a bunch of other products that also make a lot of sense, from my favorite mini-pump to super-adjustable dropper posts, some hidden tools, and a whole bunch of other things sold directly from their website. Clever products sold at reasonable prices is a strategy has seen the brand emerge as a favorite rider. Recently, several sources have suggested that the tiny Squamish brand has taken on some investment dollars from the not-so-tiny Pon Holdings to help them keep pace with demand.

Who the heck is Pon? The Dutch conglomerate’s cycling arm is called Pon.Bike and currently owns Santa Cruz, Focus, and Cervelo, as well as Cannondale, Schwinn, and a bunch of other brands, making it one of the largest cycling companies in the world.

Sam Richards, OneUp’s owner and founder, had this to say when I reached out for comment: “OneUp is a small, privately owned Canadian company based in Squamish, BC. We don’t discuss our financial details publicly. Lots has changed in the last nine years, but our focus and motivation remain the same. We started out as three engineers making the parts we wanted for our bikes. Chris, Jon, and I are still running OneUp, still in Squamish, and still making the parts we want for our bikes. But now we have an awesome team of sixteen more riders helping us. We’re stoked to share our latest components with you soon.“

Pon for their part, gets a lot of credit within the industry for not messing with a good thing when they bought Santa Cruz. If Pon or anyone else does in fact have an interest in OneUp, we’re hopeful that it’ll simply translate to more stock of more clever products, sold at reasonable prices.

Indonesian brand Polygon had been on the World Cup series for the last eight years as the title sponsor and frame supplier for the Polygon UR Team, but that came to an end last year and there’s currently no such thing as a 2022 Polygon downhill bike. What they do have, however, is a brand new enduro bike that uses a six-bar suspension layout, and a brand new enduro racing team consisting of Matt Stuttard, Brady Stone, and Dan Wolfe.

Even so, we’ve heard that there might be a yet-to-be-seen downhill bike in the works using a similar suspension design and that while their EWS team is a factory-supported effort, they could go back to being a title and frame sponsor at the World Cup. Even the largest brands sell relatively few downhill bikes, with them being a drop in the bucket compared to numbers from cross-country and trail categories that are many times larger, so why bother? Downhill bikes, and those being raced at the World Cup level, help to sell a ton of other models, including brand-new enduro bikes.

He’s won many World Cups, overall titles, and is both a national and World Champion, but coming back to race Hardline after a nightmare crash and more than a year away might be just as impressive. If you haven’t seen it, Gee was filming ‘The Knife Edge’ in the UK and riding a rock ridgeline with too much exposure when things went horribly wrong. The result was many broken bones, a punctured lung, and a two-week hospital stay after being airlifted off the mountain. It was the kind of crash that would see the average person trade their mountain bike in for a set of golf clubs, but Gee is obviously not your average person.

The Briton was riding hard during Crankworx Whistler when I ran into him and told me that he plans to come back, which was also confirmed in Nick Bentley’s interview with him from Hardline: “What next season looks like I’m not sure yet because we’ve got some big filming projects planned as well. But, you know, this weekend shows I love racing and Hardline especially since it’s such a sick event. So yeah, I’m keen for this, I’m keen for some World Cups, and yeah, we’ll see.“

Loris Vergier Not Riding for Trek in 2023
Status: False

After four years with the Syndicate, Loris Vergier signed with the Trek Factory Racing outfit in 2021 to ride the ever-evolving Session downhill bike. He’s had plenty of success since, from a handful of impressive wins in Maribor (again!) and more recently on the infamous Val di Sole World Cup track by over three seconds, but the Frenchman has also had a rough string of injuries to close out the season. An innocent-looking low-side crash in Mont-Sainte-Anne resulted in a bum shoulder and Vergier sitting out come Sunday, while three broken bones from a practice crash at French Championships kept him from improving on his fourth place in 2021. Loris still managed to finish second overall in the World Cup standings, with a win at the final round in Val di Sole, and will no doubt be even more of a force if and when he stays healthy.

Loris will be aiming for the top spot aboard a Session through 2024, with the team confirming his contract to us and putting a stop to any unfounded rumours.

Commencal has had a massive competitive presence, with multiple teams spanning downhill racing and the Enduro World Series that have earned many wins over the last handful of seasons. They might be taking a more focused approach in 2023, however, with the rumor being that their presence will be cut down to just two teams. Currently, there is Muc-Off, 100%, Dorval, and Les Orres. An inside source told us to expect 100% to go, and it’s mere speculation, but with Cécile Ravanel’s history in cross-country, we could see Commencal Les Orres still existing, albeit it supporting their cross-country efforts.

Ravanel works closely with Pauline Ferrand-Prévot, and was even recently seen riding a prototype Commencal cross-country bike with the world champs name on it. We’ve reached out for comment, but haven’t heard anything by publication time.

A handful of junior racers spent the 2022 season blowing our minds, including Jackson Goldstone and Jordan Williams. Goldstone is likely to be on a V10 next year and just took a remarkable win at Red Bull Hardline, but it’s Williams who won the World Championship, as well as a remarkable nine-second victory at the finals in Val di Sole, Italy, to wrap up the year. For some perspective, Williams actually set the fastest times of the day in both qualifying and the race… including the pro men’s times. Yes, there are asterisks (different times of the day, different conditions) but still, it’s not crazy to think that Williams (and Goldstone) could be challenging the likes of Bruni and others for World Cup wins in 2023.

A source on the World Cup series has told us that Williams, who’s contracted by the Madison Saracen Factory Race Team, could be riding a Specialized in 2023 on their Gen-S development program rather than beside Bruni on the factory team. We’ve reached out, and will let you know once we hear more.