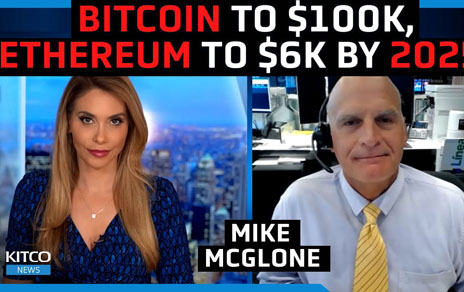 (Kitco News) – The ‘Fed sledgehammer’ of rising interest rates will cause a market crash worse than 2008, but Bitcoin and Ethereum will recover to all-time highs, said Mike McGlone, Senior Commodity Strategist at Bloomberg Intelligence.

“I think it’s going to be worse than the 2008 correction, worse than the Great Financial Crisis,” said McGlone. “The Fed started easing in 2007, and then they added massive liquidity. They cannot do that anymore.”

However, McGlone added that Bitcoin and Ethereum would reach new heights as adoption increases, but only after facing a significant correction.

“Cryptos are the fastest horse in this race,” he explained. “Looking forward into the future, they will continue to appreciate, but for now…everything’s going down.”

In response to high inflation, The Federal Reserve has increased its key interest rate by 225 basis points over the year. The inflation rate in August was 8.3 percent, higher than markets priced in, which McGlone blamed on the Fed’s previously loose monetary policy.

“[The Fed] knows now that they are somewhat responsible for this massive inflation,” he said. “The Fed’s not going to be easing anytime soon… Markets have to go down.”

McGlone explained that the Fed injected “too much liquidity in the market” in response to COVID-19, causing risk assets to appreciate.

“The Fed will not be easing anytime soon, and… now we have the benefit of knowing the mistakes they made by easing too much” he said. “The pendulum for risk assets swung too far to one side.”

The recent Ethereum Merge was highly anticipated, but Ether, Ethereum’s native currency, fell 4.3 percent in the first day of trading following The Merge.

In the next 5 to 10 years, McGlone predicted that Ether and Bitcoin would “go much higher,” but that like all risk assets, “The Fed sledgehammer” would continue to damage their value.

McGlone previously called for a $100,000 price for Bitcoin by 2025, and told Makori that he stands by his call.

“It’s a matter of time before it gets to $100,000,” he confirmed. “By code, supply is going down, you can’t change that. Adoption and demand are appreciating… I think it’s going to accelerate.”

To find out McGlone’s price outlook for Ethereum and gold, watch the video above.