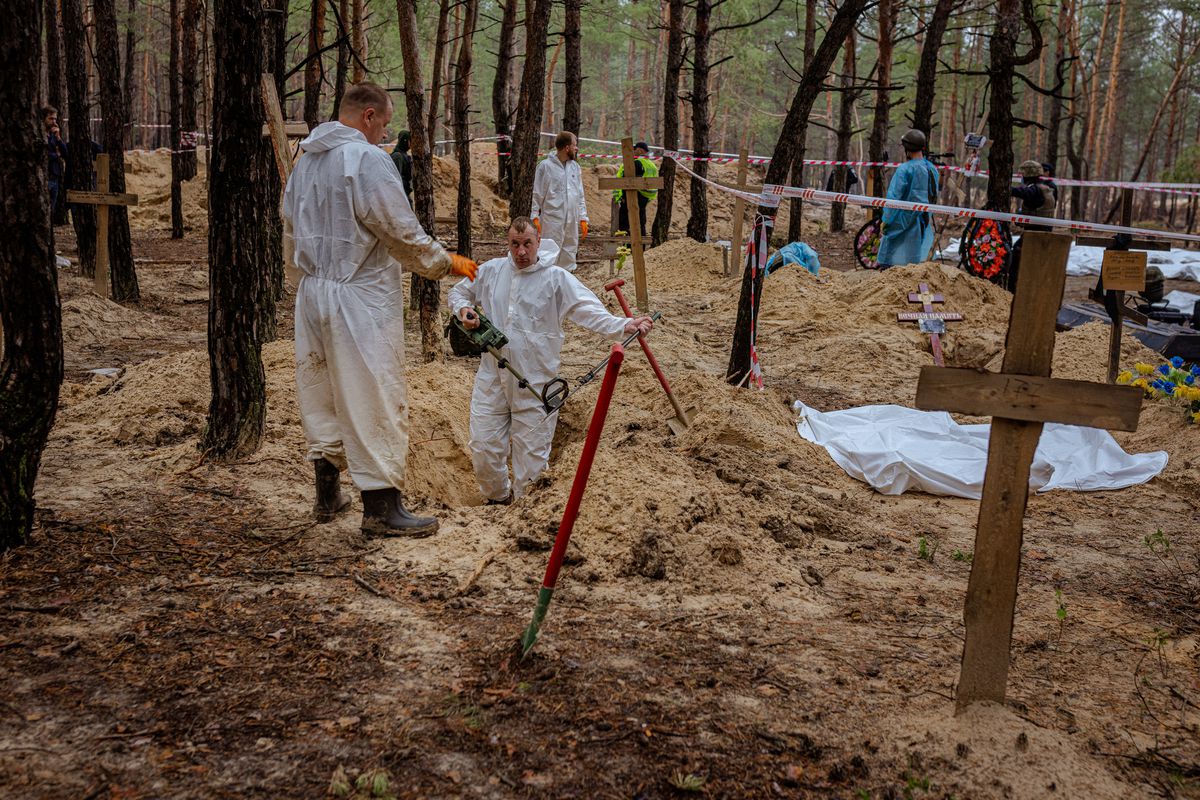 In a dense pine forest on the edge of this recently liberated city, a simple wooden cross lay on the ground with only the number 125 written on it in black marker.

Lifted out of the shallow grave behind it were the decomposed remains of a man dressed in a frayed overcoat and black boots. It’s not known who he was or how he died, only that he was one of 445 Izyum residents buried here during the six months the city was under Russian occupation.

On Friday, Ukrainian prosecutors began the grisly process of exhuming the sprawling site and trying to understand what happened to those buried here. One grave at a time, teams of criminal investigators dressed in plastic blue overalls dug up the loose brown soil and lifted the body out with their gloved hands, searching the pockets for any documents. Most were unidentifiable: After pulling a corpse out of grave 124, investigators zipped it into a white body bag and simply wrote “woman” on it.

More than half a year into an invasion that has seen Russian troops repeatedly commit war crimes against civilians, the investigators already believe that what happened in Izyum belongs in the same category as the atrocities inflicted on cities such as Bucha and Mariupol.

“One of the bodies exhumed behind me had his hands tied and a rope around his neck. For me, as a prosecutor with experience, those are the indicators of war crimes. But we need to investigate,” said Oleksander Ilienkov, a deputy prosecutor for Izyum and the surrounding Kharkiv region. He compared what appears to have happened here to Bucha, a suburb of Kyiv where 458 bodies were discovered after a month-long occupation earlier in the war.

Mr. Ilienkov said he was worried there would be other horrifying discoveries as Ukrainian troops continued a counteroffensive that over the past 10 days has liberated a large swath of Eastern Ukraine from Russian control.

“Russia is leaving death behind it everywhere and must be held responsible,” Ukrainian President Volodymyr Zelensky said in a video address Thursday night, shortly after the initial discovery of the site outside Izyum.

Moscow has dismissed the evidence of war crimes committed in Bucha and elsewhere as “fake.”

Most of the graves outside Izyum – which could represent the largest mass burial in Europe since the Balkan wars of the 1990s – were marked only with a simple cross and a number. Others, just with a stick. Only a few had additional clues as to who was buried there or when they died.

At the center of the makeshift cemetery, 17 dead Ukrainian soldiers were dumped together in a single pit. Prosecutors said they had been shot at close range. Their hands were tied, and there were signs they had been tortured before being executed.

Torturing and executing prisoners of war are both war crimes under the Geneva Conventions.

The civilian dead were buried in single plots. Among those marked by crosses with dates on them, the majority died in March, during the three-week battle that saw Russian troops capture Izyum after first pummeling the city with airstrikes and heavy artillery.

Near the outskirts of the site, someone has hung black memorial signs on six crosses. All six died on March 9, the day Izyum residents say 53 people were killed in a Russian airstrike that leveled an apartment building on Pervomayska Street, in the city centre.

Three were members of the same family: five-year-old Olesya Stolpakova and her parents Elena, 31, and Dmitry, 33. Another was identified as eight-year-old Aleksandra Ponyukhnova. Forty-five others are said to have died in another early March airstrike that reduced two other apartment buildings to rubble.

Those with more recent dates of death written on their graves appear to have been favorably elderly. Izyum was left without electricity, gas and running water from March until August, and residents say the price of medicines in local pharmacies – those that remained open – roughly quadrupled at the same time as jobs disappeared and pensions went unpaid.

There appears to have been a system to the numbers written on the graves, though Ukrainian prosecutors say they don’t yet understand what that was. Someone initially wrote the numbers 6 and 7 on two graves near the start of the site, then scratched those numbers out and wrote 41 and 42 instead, as though the numbers corresponded to a list somewhere.

Lieutenant Taras Berezovets, the press officer for Ukraine’s First Special Forces Brigade, said many of the dead had originally been buried in the gardens and courtyards of their homes, before the Russians ordered that all bodies be exhumed and moved to the makeshift cemetery outside the city . The Russians appear to have dug tank positions around the site, suggesting it doubled as a military base.

“They didn’t want people to know how many died. Nobody had access, so nobody knew how many were here,” Lt. Berezovets said.

On Friday, the handful of locals who followed police and media into the forest cemetery were both appalled and unsurprised by what they saw.

“I came to see the truth about what happened here,” said Serhiy Shtenko, a 33-year-old programmer who said he was looking for the graves of friends and neighbors who had been killed in the airstrike on Pervomayska Street.

He said the size of the gravesite was roughly what he had expected after living through six gruelling months of war and occupation. “I saw how bodies were taken away every day. It’s what I thought it would be.”