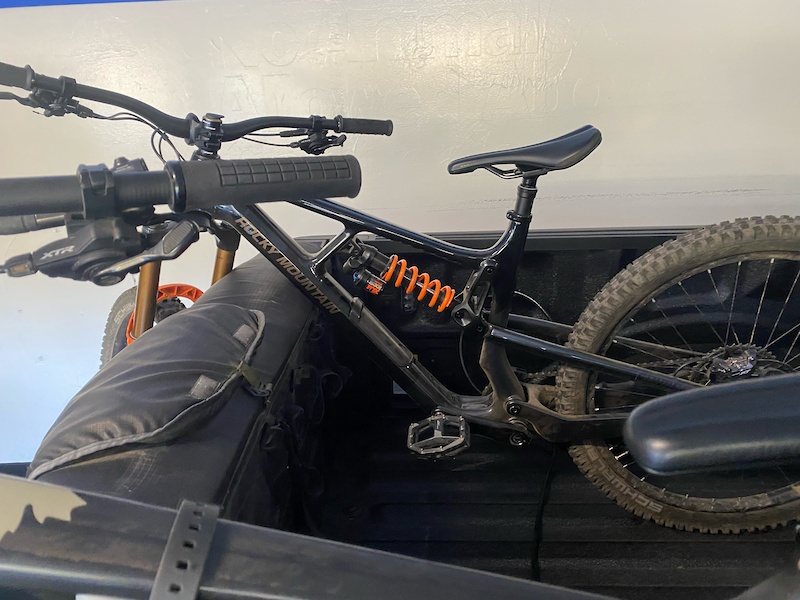 It’s been three years since the Rocky Mountain Slayer last received an update, which means it’s very likely there’s a new version on the way in the not-so-distant future. A keen eyed reader recently sent over a few photos of what’s likely the next iteration, a carbon-framed bike that looks to be well past the prototype mule stage. With Schwalbe tires, Shimano flats, and OneUp stuff, we’d guess that it’s Thomas Vanderham’s bike—hopefully on a boat to film a launch video or something.

The overall shape is close to that of the current model, with the shock mounted to a strut that runs between the top and down tube. This time, the shock is mounted to a bracket rather than being attached directly to the frame, suggesting it’s mullet compatible, just like the Altitude. The chainstay length looks to be adjustable via a flip chip, another feature also found on the Altitude. It’s also worth noting that the blind chainstay pivot of the current generation appears to have been replaced with a more conventional design.

Rocky may be hopping on the in-frame snack storage bandwagon, with what appears to be a lid positioned in the middle of the downtube. It’s hard to tell how it would open – possibly a latch at the top, or maybe it uses magnets, a tactic that we’ve seen used by Last bikes. Now that most bikes have water bottle compatibility, frame storage has become the latest must-have feature. I’m all for it—the less I need to carry on my back or around my waist the better.

As for geometry, I’d imagine that it’s a little longer and slacker than before. (Crazy theory, right?) In the neutral setting the current model has a 64.5-degree head angle and a 475mm reach. That not too far off from what’s become the modern norm, but assuming that the Slayer remains a 170 / 180mm freeride machine I could see it dropping to 64 or 63.5-degrees, maybe with a few millimeters added to the reach.

No, there’s no review tomorrow, or the day after, but we are hoping to get one in for testing when / if it officially launches. It’s no secret that things didn’t go to plan with the last Slayer we tested, so it’ll be good to get the newest version in and give it another try.

Rocky Mountain’s official statement about the mystery bike is: