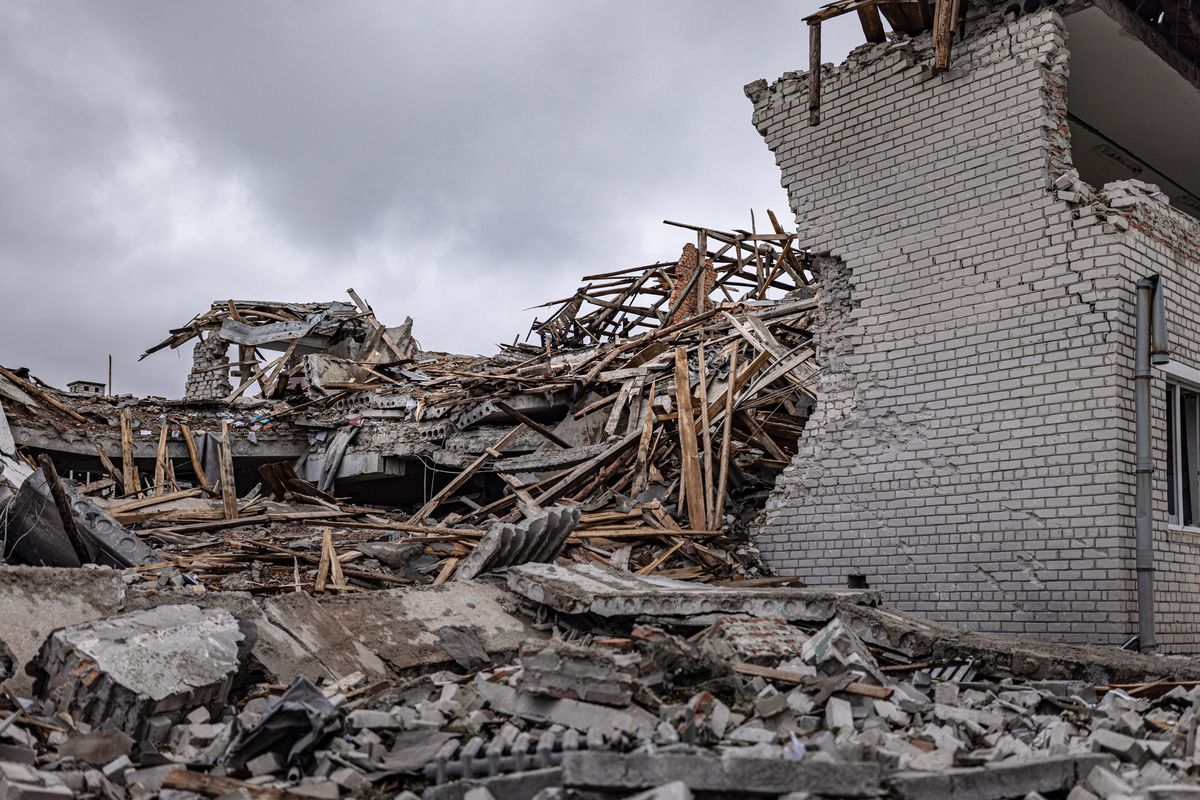 On Sept. 7, the day the city of Balakliya was liberated by the Ukrainian army, the retreating Russians fired a pair of missiles back at the territory they had just fled. Their target wasn’t the Ukrainian military, which had just almost completely routed Russian troops from Ukraine’s eastern Kharkiv region; the missiles instead slammed into the only school in the nearby village of Verbivka.

Standing Tuesday outside the shattered building where she worked for 22 years as a Ukrainian literature teacher, Nadia Porotsenko said that, until they razed it last week, the Russians had used the building as a base. “They totally destroyed our alma mater. It was a beautiful school.”

A week into the stunningly successful Ukrainian counteroffensive that has rolled back many of the territorial gains Russia made earlier in the war, the strike on the school in Verbivka stands out as an attempt to get rid of any evidence of how Russian forces ruled this part of Ukraine over the previous six months.

But proof of the harsh repression used to control Balakliya is too plentiful to completely erase. There are no signs, so far, of the kind of mass murder that Russian troops infamously carried out in the Kyiv suburb of Bucha. But Russia ruled by fear and intimidation here too.

The other local hub of the occupation was the police station in the center of Balakliya, a small industrial city with a prewar population of 20,000. Room No. 7, on the second floor, was where residents suspected of harboring pro-Ukrainian sympathies were violently interrogated. Electrical cables, which Ukrainian police say were used to administer shocks, dangle from the ceiling.

One wall in Room No. 7 is punctured by a cluster of bullet holes, roughly a meter above a small black chair, suggesting interrogators would shoot just over the heads of their prisoners in an effort to scare them into co-operating. Colonel Serhiy Boldinov, the head of the investigative department of the Kharkiv regional police force, called the room a “torture chamber” and said documents recovered in the police station seem to indicate the interrogations were carried out by Russia’s Federal Security Service (FSB).

Downstairs are four small, windowless cells. Collar. Boldinov said the Russian occupiers kept as many as 10 men in a cell, though there were only two beds in each. As many as eight women at a time were kept in a separate room. In one of the men’s cells, someone has chronicled their detention – starting May 22 and ending exactly a month later – by marking the days on the wall beside the squat toilet.

Locals said a minor comment interpreted as pro-Ukrainian could lead to days or even weeks of interrogation and harsh treatment.

“You couldn’t open your mouth, everyone was silent,” said Volodymyr Kapustan, a 43-year-old farmer in Verbivka. If someone said something the Russian soldiers didn’t like, “they threatened to shoot you in the legs. They’d arrest you and take you to the school.”

Sitting beside Mr. Kapustan in an empty children’s playground, another man shouted an obscenity about Russian President Vladimir Putin. “We couldn’t say that before,” Mr. Kapustan said, laughing.

The violence continued until the very last hours of the occupation of Balakliya. On the edge of a forest on the outskirts of town Tuesday, Ukrainian investigators were exhuming the bodies of two men who, locals said, were shot on Sept. 7 as they drove through a Russian checkpoint.

“I want to ask Putin: ‘Why did he kill my son? Why did he bring his people here with all their scary weapons?’” said Valentina Shepel, after identifying her son Pyotr’s body. “Why didn’t anyone stop him yet? …I ask all the mothers who are living there [in Russia] to rise up against this murderer.”

Balakliya was the domino that collapsed the rest of the Russian front line in the Kharkiv region, a counteroffensive that continues a week later, with Ukrainian troops continuing to liberate towns and villages Tuesday. Speaking in the center of Balakliya, Deputy Defense Minister Hanna Malyar said Ukraine had retook more than 3,800 square kilometers in the region since the start of the month, liberating some 150,000 people from Russian rule.

Tuesday was the first time Ukrainian forces have allowed media to enter the newly recaptured areas.

The journey to Balakliya, the regional center of Kharkiv, provides a snapshot of the ferocious fighting that took place. The road, which is almost impassable in places because of damaged bridges, is lined with destroyed tanks and other armored vehicles, most of them marked with the “Z” symbol of the invaders.

A convoy of three small cars headed to Kharkiv was apparently destroyed by a missile strike. It wasn’t clear what had happened to the passengers. Gas stations and factories along the side of the road were torn apart by heavy weapons fire.

Locals said they were relieved to see the Ukrainian flag flying over Balakliya again.

The day her town was liberated was Lyudmila Sysina’s birthday. The 64-year-old retired hairdresser and her husband had remained inside for most of the previous six months, even through they had only sporadic water and electricity. The few shops that remained open after the start of the war had food, but few people in town could afford the rising prices of imported goods from Russia.

“It was all a nightmare, it couldn’t have been worse,” Ms. Sysina said as she patiently waited for a box of humanitarian aid delivered by truck Tuesday. As she spoke, others desperately pushed past her to grab boxes of food.

The hardest part of life under occupation, several residents said, was the feeling of being cut off from the outside world. Mobile signals went dead in Balakliya in the first hours after the Feb. 24 invasion, and locals could only receive messages and catch up on the news if they dared to walk to one of the few places in town where it was still possible to get a faint signal.

For Ms. Sysina and her husband, that meant going long stretches knowing that their two police officer sons were somewhere nearby, perhaps fighting against the Russian army, but not knowing whether they were alive.

Then came Sept. 7, Ms. Sysina’s birthday, and the liberation. Her sons followed the first wave of troops into Balakliya. “They came to see me and we celebrated,” she said, wiping away tears. “My sons are good boys.”