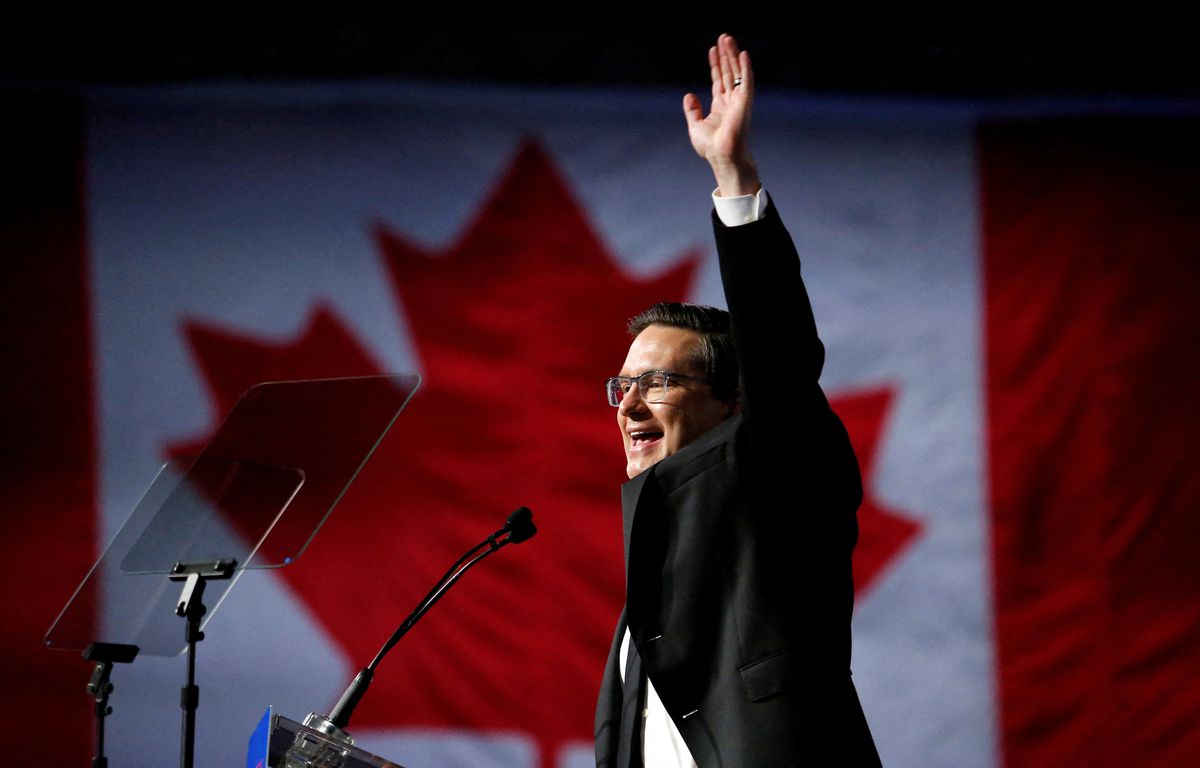 After a landslide victory on Saturday night, new Conservative Leader Pierre Poilievre began the job of pitching himself and his party to Canadians with a speech that leaned as heavily on the personal as it did on the political.

The father of two was welcomed at the stage of the Ottawa convention center by his wife, Anaida. He talked about being born to a teenage mom and adopted by two teachers. He introduced his family members sitting with the crowd of supporters, including his father and male partner. He joked about being the befuddled husband among his fast-talking, Spanish-speaking in-laws.

He returned repeatedly to the importance of “hard-working” Canadians getting their fair share, weaving his family narrative around promises of tax cuts, smaller government and affordable housing.

“Today we are one party serving one country,” said Mr. Poilievre, who is slated to address the Conservative national caucus on Monday. “We will make government affordable so life is affordable.”

Pierre Poilievre is the new Conservative Party Leader. His policies and career so far

Mr. Poilievre inherits a party with stocked coffers, a slew of new members and – depending on the Liberal-NDP political agreement – ​​up to three years of rebuilding before the next election.

He also launches his leadership with a strong cross-Canada mandate from party members, and with former critics now affirming their support.

He is the first party leader, since former prime minister Stephen Harper, to win the leadership by a decisive margin on the first ballot, with 68-per-cent support. The closest of his four rivals was former Quebec premier Jean Charest, at 16 per cent.

1/3 Congratulations to @PierrePoilievre and his team. You deserve a clean slate and the opportunity to unite the membership. We must end the internal mudslinging. Only Liberals benefit from a divided @CPC_HQ. #cdnpoli

After the vote, Mr. Charest tweeted his congratulations to Mr. Poilievre. “You deserve a clean slate and the opportunity to unite the membership. We must end the mudslinging,” he wrote. On Sunday, in a video posted to Twitter, he said that while he will be active in the party and fight for the ideas he advanced in the leadership race, he is returning to the private sector.

Mr. Fast, who co-chaired Mr. Charest’s leadership campaign and remains critical of Mr. Poilievre’s campaign vow to fire the Governor of the Bank of Canada for rising inflation, said Sunday that he hoped the party would now rally around its new leader. “In any leadership contest, there is going to be a robust discussion about the issues. That’s what has happened here.”

Quebec MP Joël Godin, who previously suggested that Mr. Poilievre’s populist campaigning style would make him reassess his party membership, also said Sunday that he “liked what he saw in the speech by the new leader” and would stick with the Conservatives.

The campaign provided stark choices for the Conservatives, particularly between Mr. Poilievre, 43, a seven-term Ottawa-area MP and former cabinet minister under Mr. Harper, and Mr. Charest, 64, who had returned to politics ten years after serving as Quebec first.

Mr. Poilievre ran a brash race that included promises to make Canadians the “frest people on Earth,” end all vaccine mandates, cut funding to the CBC and endorsing cryptocurrencies.

He also challenged what he called “gatekeepers” such as politicians, bureaucrats and agencies that he accused of stifling the potential of Canadians, and government that had become “big and bossy.” Late in the campaign, he promised that if he became prime minister, he would enact a “plain-language law” to require government to publish information in straightforward language.

In his speech Saturday, while he covered many of the same themes, he avoided references to the fate of the Governor of the Bank of Canada, or bitcoin. Instead, he focused on more mainstream proposals – building up housing stock by reducing red tape at the municipal level, eliminating Canada’s need for foreign oil, and fighting climate change “with technology and not with taxes.”

Daniel Béland, the director of the McGill Institute for the Study of Canada, said a decisive victory will make it easier for Mr. Poilievre to control the party and focus on winning the next election. But he will now have to successfully parry Liberal attempts to frame him as a leader with extreme views. “We will see how disciplined he is moving forward,” Dr. Béland said. “Three years is a very long time in politics.”

Kathy Brock, a political scientist at Queen’s University’s school of policy studies, said the speech was a clear effort to demonstrate that the party could be more inclusive. But he now faces the task of bringing polarized groups of people under one tent. “He is going to have to temper the debate,” she said, “and treat people with respect regardless of where they stand.”

Marjory LeBreton, a former Conservative senator, suggests this will be the true test of the coming months – how the leader will appeal to moderates while meeting the expectations of some of the new members who may have signed up because Mr. Poilievre tapped into the current anger around the pandemic restrictions and the economy.

“At the end of the day, anger can only last so long,” Ms. LeBreton said. She said Mr. Poilievre may also face an “authenticity problem” if he doesn’t follow through on some of the more “reckless” policies he advanced as a candidate.

There is no doubt that he is a skillful politician, Mr. LeBreton said. “So it will be interesting to see how he actually threads that needle.”

Mr. Poilievre will make his first appearance as Conservative Leader in the House of Commons on Thursday when members gather to honor Queen Elizabeth.