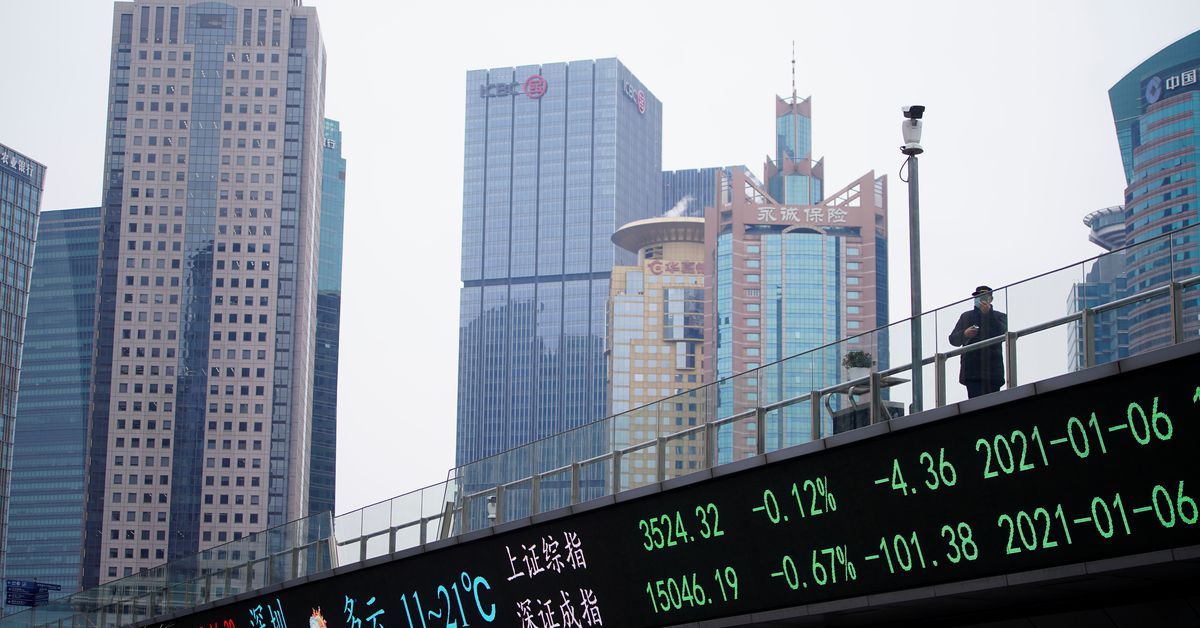 A man wearing a face mask, following the coronavirus disease (COVID-19) outbreak, stands on an overpass with an electronic board showing Shanghai and Shenzhen stock indexes, at the Lujiazui financial district in Shanghai, China January 6, 2021. REUTERS/Aly song

SYDNEY, Aug 29 (Reuters) – Asian shares slid on Monday as a mounting risk of more aggressive rate hikes in the United States and Europe shoved bond yields and the dollar sharply higher while also stoking fears of a global recession.

Federal Reserve Chair Jerome Powell’s promise of policy “pain” to contain inflation quashed hopes that the central bank would ride to the rescue of markets as so often in the past. read more

The tough-love message was driven home by European Central Bank board member Isabel Schnabel, who warned over the weekend that central banks must now act forcefully to combat inflation, even if that dragged their economies into recession. read more

That triggered a sharp fall in Euribor futures as markets priced in the risk the ECB could hike by 75 basis points next month and a higher peak for interest rates.

“The main takeaways are taming inflation is job number one for the Fed and the Funds Rate needs to get to a restrictive level of 3.5-4.0%,” said Jason England, global bonds portfolio manager at Janus Henderson Investors.

“The rate will need to stay higher until inflation is brought down to their 2% target, thus rate cuts priced into the market for next year are premature.”

Futures are now pricing in around a 73% chance the Fed will hike by 75 basis points in September and see rates peaking at 3.75% to 4.0% and staying there for longer.

Much might depend on what the August payrolls figures show this Friday. Analysts are looking for a moderate rise of 285,000 following July’s blockbuster 528,000 gain.

The hawkish message was not what Wall Street wanted to hear and S&P 500 futures were down a further 0.9%, having shed almost 3.4% on Friday. Nasdaq futures lost 1.2%, with tech stocks pressured by the outlook for slower economic growth.

Two-year US yields surged nine basis points to 3.489%, the highest since late 2007 and far above the 10-year at 3.13%. Yields had also climbed across Europe with double digit gains in Italy, Spain and Portugal.

All of which benefited the safe-haven US dollar as it shot to a fresh two-decade top of 109,450 against a basket of major currencies, breaching the previous high from July.

“EUR/USD can remain below parity this week,” said Joseph Capurso, head of international economics at CBA.

“Energy security fears will remain front and center this week as Gazprom will shut its mainline pipeline to deliver gas to Western Europe for three days from 31 August to 2 September,” he added. “There are fears gas supply may not be turned back on following the shut-down.”

The rise of the dollar and yields has been a drag for gold, which was down at $1,722 an ounce.

Oil prices swung higher on speculation OPEC+ could cut output at a meeting on Sept 5.