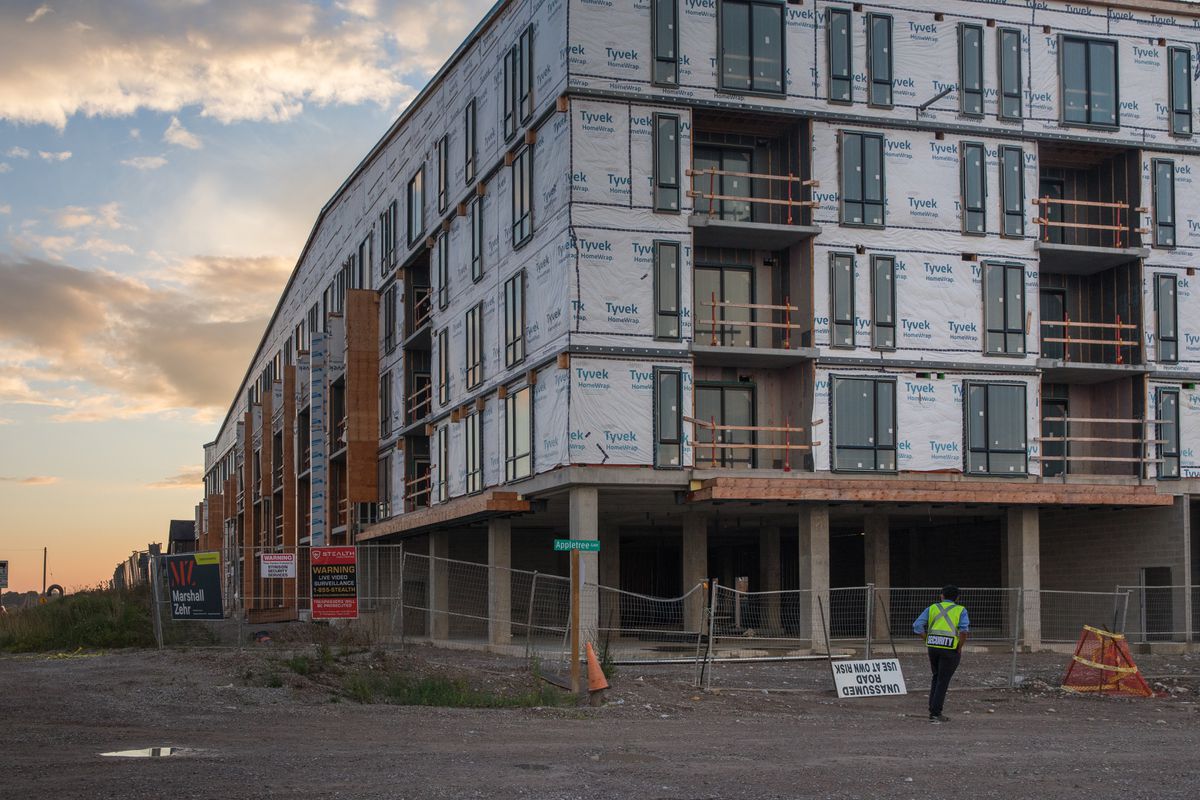 A nearly complete mixed-use retail and residential rental project has been pushed into receivership in London, Ont., as its lender alleges construction delays blew up an initial $18-million construction budget and dozens of contractors claim millions in unpaid work.

London’s Applewood Marketplace Inc. may be just one of many developments to face financial trouble amid grinding delays and rising costs affecting the building industry. Data from the real estate research and data company Altus Group shows roughly 60 per cent of residential and commercial projects are facing delays of about a third of their original timetables.

Court filings from construction lender MarshallZehr Group Inc. allege that Applewood owes it more than $58-million, with the interest on all that debt surpassing $36,000 per day. Contractors have also filed links for $8-million in unpaid work.

There are two named principals for Applewood Marketplace, located on former farmland on the northern edge of London: Mike Clawson and Perry Sempecos. Mr. Clawson up until recently was primarily known as a London-based custom home builder, and Mr. Sempecos is part of a family business in real estate and commercial development.

The court documents contain unproven allegations that have not been tested in court. Mr. Sempecos declined to comment and Mr. Clawson, whose colleagues said went on a month-long vacation to Europe starting in mid-July, could not be reached.

In 2019, Mr. Clawson purchased a parcel of land from Peter Sergautis, a local landowner who had been planning a larger subdivision with the same Applewood branding since the early 1980s and has begun to parcel and sell off pieces of the holdings. Mr. Sergautis has no ongoing financial relationship with Mr. Clawson or his partners, and said he hopes the parties will come to an agreement to finish what will allow the first portion of his dreamed development to be built.

By 2020, Mr. Clawson and Mr. Sempecos took loans from MarshallZehr to finance the construction of the first phase of the project: a five-storey building with 107 rental apartments and retail spaces at ground level.

Even as Phase 1 ran into delays from key contractors, Applewood began preparing work on the land set aside for a second, larger phase on the site, which was slated to hold more than 460 apartments. An affidavit from MarshallZehr chief operating officer Cecil Hayes suggests the troubled project began unraveling on April 4, 2022, when the company stopped making interest payments on its loans. In May, the first of 46 liens for unpaid work by contractors began to show up on the property title.

By June, all work on the site had stopped, and on June 3, 2022, MarshallZehr sent a demand letter and Notice Of Intention To Enforce Security (NITES) to Applewood. After that, the debtors allegedly attempted to sell the project to a third party and shared with MarshallZehr an agreement of purchase and sale that has since expired. In an affidavit, Mr. Hayes writes: “I think it is unlikely that the transaction as currently structured would be to be concluded,” while acknowledging the assessment of the potential sale is up to receiver.

On Aug. 3, a receiver was appointed from Ernst & Young Inc. to oversee a resolution to the company’s insolvency. What happens next will be some sort of arrangement that will either see MarshallZehr converting its debt into equity ownership of the project or a sale arrangement of some kind that pays off the loans.

“It would be inappropriate for MarshallZehr to provide additional comments regarding this receivership,” said MarshallZehr CEO Peter Berczi.

In construction, time is money and delays can end up burning through a company’s cash reserves.

“The interest is just the tip of the iceberg – it is way bigger than that,” said David Schoonjans, a senior director with Altus Group who focuses on costs and project management.

“There’s project overhead: crane rentals, management, subcontractors. Take a 30-storey high-rise in the GTA; you can easily burn through half a million or $800,000 every month you’re delayed. That’s a lot of money very quickly. And there’s 50 companies on that project, so when you delay, you open yourself to a massive box of litigation troubles.”

Mr. Schoonjans said one challenge in defining delays and their potential costs is that there may be cases where a planned timeline was never realistic, which means costs were underestimated from the start. What may be happening now is that the tide is going out and beaching builders who were already swimming too close to the rocks.

“When the markets are going up and everybody sees what looks like massive profits … all they’ve ever seen is people making money off of real estate and for a lot of years a lot of sloppy mistakes were covered up by rising revenues,” said Mr. Schoonjans.

While the demand for housing is as hot as it ever was, costs to build have risen even faster than revenues. “We’re at this standoff where costs either have to go down or revenues have to go up … or projects are not going to get built.

While the financial challenges of delays impact the top players in a development, the bad news also rolls downhill to the subcontractors whose businesses are also pressured by the same labor and supply issues.

Steve Creces of CD Drywall & Acoustics in London filed a $170,000 lien after drywall and soundproofing work he did in the Applewood building’s retail space was stopped.

Your house is your most valuable asset. We have a weekly Real Estate newsletter to help you stay on top of news on the housing market, mortgages, the latest closings and more. Sign up today.