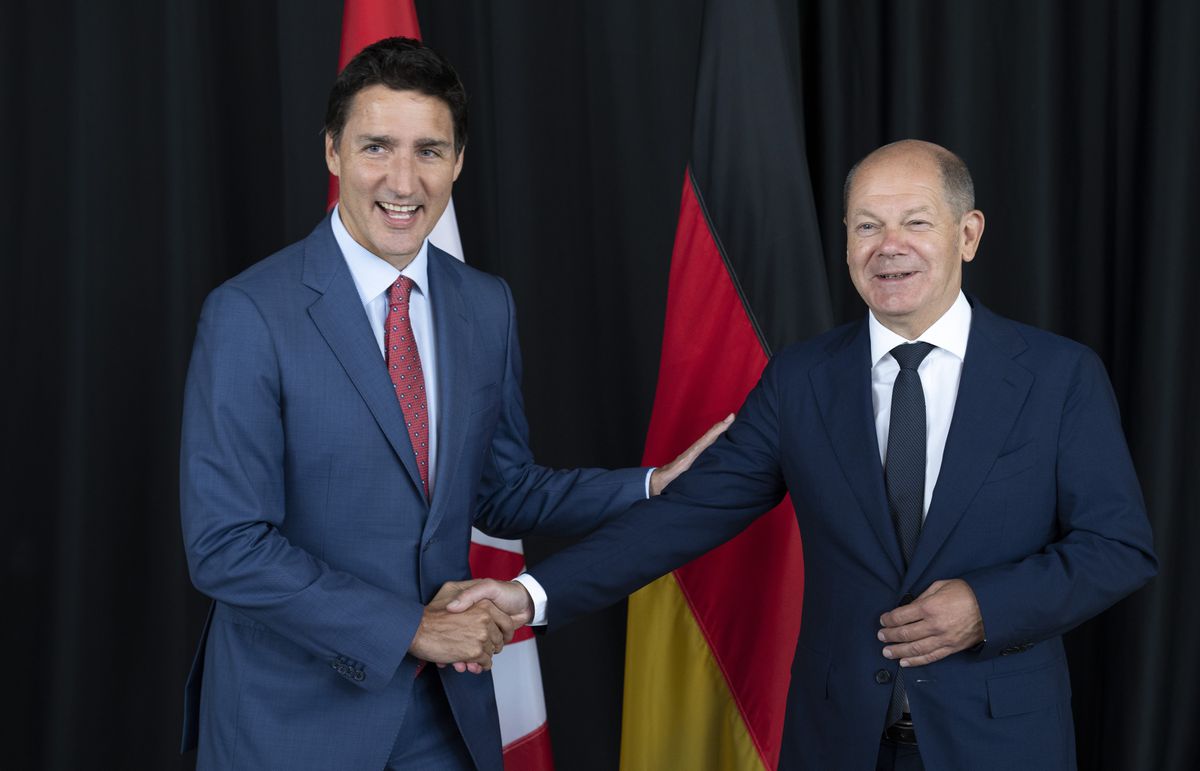 The federal government signed separate agreements with Volkswagen and Mercedes-Benz Tuesday that will see the two German auto manufacturers secure access to Canadian raw materials for batteries in electric vehicles.

Prime Minister Justin Trudeau and German Chancellor Olaf Scholz observed the signing ceremony in Toronto at an event hosted by the Canadian-German Chamber of Industry and Commerce.

In a release, Ottawa said these agreements will “help secure Canada’s position as a leading center of excellence for the manufacturing of electric vehicles and batteries.”

The agreements include Canadian cobalt, graphite, nickel and lithium.

The Mercedes-Benz agreement focuses on enhancing collaboration with Canadian companies along the electric vehicle and battery supply chains and supporting the development of a sustainable critical mineral supply chain in Canada.

“(These agreements) could help fund new mine development in Canada, which is beneficial for our mining sector,” BMO mining and metals analyst, Jackie Przybylowski, said in an interview. “Canada generally has a terrific track record for sustainable mining; encouraging mining here will potentially provide sources of cleaner and more ethically sourced raw materials for electric vehicles globally.”

The agreements come one week after US President Joe Biden signed a plan to provide tax credits for electric vehicles produced in North America, not only those built in the United States.

They also follow a string of promised investments by other electric-vehicle manufacturers into the Canadian automotive industry.

More than $13 billion was promised in just eight weeks this past spring to build the needed battery supply chains and shift production from combustion-engine to plug-in vehicles.

That was on top of another $3.5 billion promised in the last four years, including investments to make electric school and transit buses, produce and process critical minerals needed to make batteries, and for research and development facilities.

“There aren’t very many other countries in the world with these minerals that are governed by democracies that actually care about the environment,” Jayson Myers, CEO of advanced manufacturing organization NGen, said in an interview.

Additionally, he thinks the agreements provide “tremendous opportunities for Canadian tech and Canadian manufacturers right across the value chain.”

“It’s not just accessing the supply of minerals. It’s: how do we improve the entire process, and how do we do things much better in an environmentally-sustainable way?” he said.

Speaking in front of business leaders Tuesday alongside Scholz, Trudeau acknowledged the strength of Canada’s mining sector, explaining that the country needs to continue to show that it has the natural resources the world needs, while demonstrating that its mining industry doesn’t have to be incompatible with “progressive values, solid labor laws, care for neighborhoods and communities” and climate change.

“There is a more pressing need for critical minerals and rare earth elements than ever before, and if we want to demonstrate a world that is cleaner and greener … we can’t continue to accept that our minerals and our inputs into our high-quality way of life need to come from authoritarian countries,” he said.

Joanna Kyriazis, program manager of clean transportation for Clean Energy Canada at Simon Fraser University, said agreements like this show that Canada’s finally capitalizing on its battery supply chain potential and emerging as a dominant player in the electric vehicle battery industry.

But at the same time, might need to pick up the pace.

“Despite being ranked high for its battery supply chain potential, very few of Canada’s metals and minerals are actually making their way into batteries right now,” she said.

“A number of new mines and associated infrastructure will have to be developed if Canada wants to capture any significant electric vehicle battery mineral market share by 2030.”

In its most recent budget, the federal government announced its first-ever critical minerals strategy, allocating $3.8 billion toward manufacturing, processing, and recycling projects, but Kyriazis said more could be done to move the needle faster, such as accelerating mining permitting times while meeting the highest environmental, social and governance standards, including Indigenous consultation and partnership.

“It will likely also require building out mining infrastructure in advance to ensure companies can access new mines plus servicing them with sufficient clean electricity to make good on Canada’s clean battery promises,” she said.

Prime Minister Justin Trudeau and German Chancellor Olaf Scholz observed the signing of separate agreements with Volkswagen and Mercedes-Benz that will see the two German auto manufacturers secure access to Canadian raw materials for batteries in electric vehicles. Trudeau says Canada is a reliable strategic partner when it comes to the EV future.