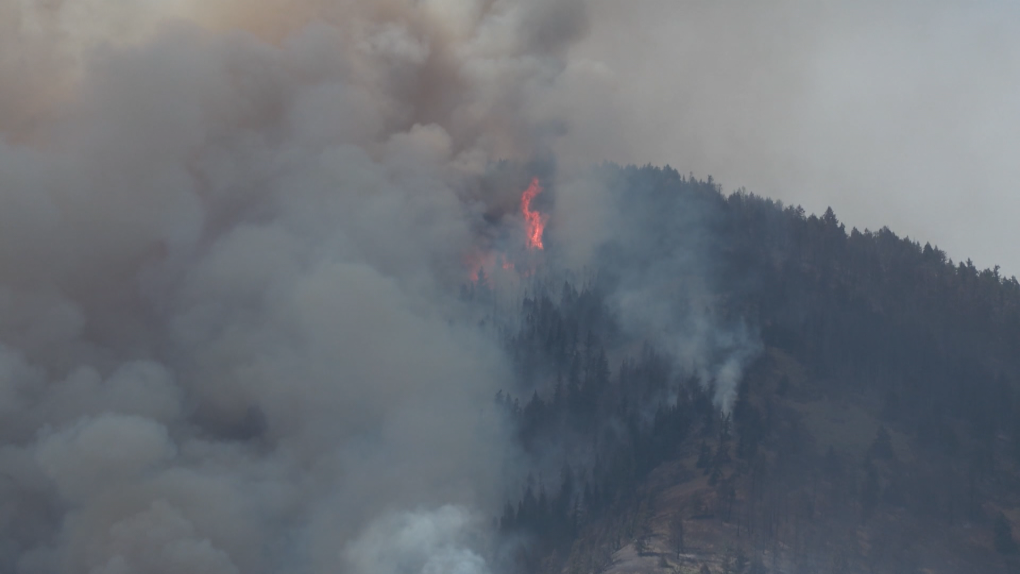 Update at 7:30 pm: The Regional District of Okanagan-Similkameen has issued an evacuation order for all of Olalla, BC, along Highway 3A in Electoral Area G, as well as several properties south of the village. All evacuation orders are available on the regional district’s website.

New evacuation orders have been issued as the Keremeos Creek wildfire continues to grow.

More firefighters have also joined the battle with crews attacking it from both the ground and from the air.

When the wildfire was last mapped Wednesday, it was about 4,250 hectares. It’s believed to have spread even further.

The fire came frighteningly close to homes along Highway 3A on Wednesday evening, but crews were able to stop it from burning any structures.

However, last Friday, one home did burn to the ground.

Les Murzsa owned that home and returned for the first time Thursday to see the devastation first hand.

“There’s nothing left. I don’t even know what some of this stuff is,” said Murzsa as he tried to identify his belongings in the ashes.

He pointed to one object, saying: “My piano strings. I’m pretty sure.”

The Murzsa returned to his home for the first time Thursday to see the devastation first hand.

Murzsa was one of the first to spot smoke, but he didn’t think his home would fall in the path of what has become a raging wildfire.

“Then the wind changed and all of a sudden the fire was directly across the street and there was a tornado of fire at one point and my heart started racing,” he said, explaining that he left only about an hour before his house caught fire .

“There were ashes raining down. Fire seemed to be getting closer.”

He did not have insurance and lost everything. He pegs his losses at around $400,000. An online fundraiser has been set up to help him.

Though devastated at the losses, he said he’s had to put it in perspective.

“In the end, you just lost a bunch of wood and belongings and a couch and that’s not all that important but a lifetime’s worth of memories in there.”