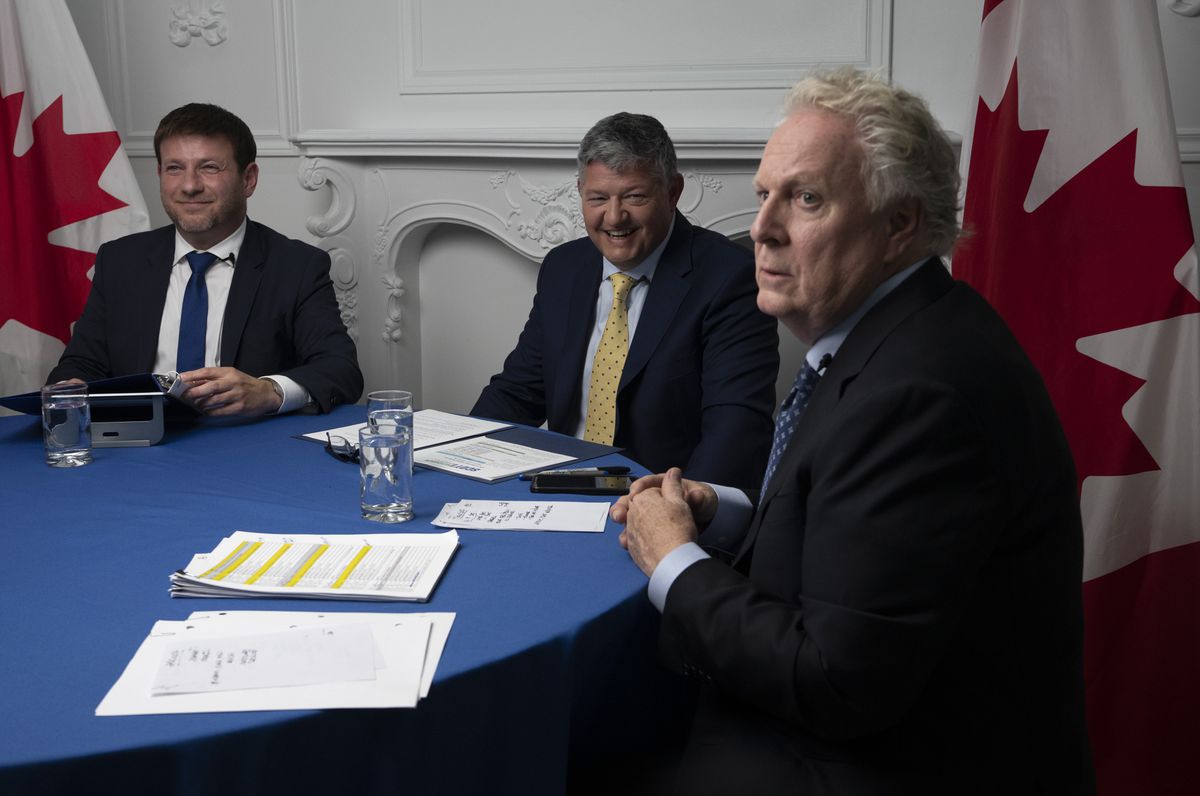 Jean Charest took on absentee candidates in the final Conservative leadership debate, declaring that showing up for such events is a show of respect for the party members who will choose the new leader.

The former Quebec premier did not directly name Pierre Poilievre, seen as a front-runner, or Leslyn Lewis, who were, respectively, in Regina and Prince Edward Island. Both had said they would not participate in the debate over concerns about its format and that they preferred to engage with members.

The other two candidates – Ontario MP Scott Aitchison and Roman Baber, a former Progressive Conservative member of the Ontario legislature – avoided the issue of the missing candidates.

The next Conservative leader could be PM. Why aren’t they getting a proper job interview?

But Mr. Charest, who has been particularly critical of Mr. Poilievre, said during the 90-minute event that a leadership candidate not showing up for the debate is like a fish who doesn’t want to swim in the ocean.

He added, “Leadership is about fighting and showing up. It isn’t about running away.”

While Mr. Charest didn’t mention Mr. Poilievre by name during the debate, posts on his Twitter account included one with the note “Where’s Pierre?” that mocked Mr. Poilievre.

In Regina, Mr. Poilievre said on Wednesday night that he was glad not to be at the debate.

“I can tell you there’s no place I’d rather be right now. I’m told that I could have, instead of being here with all of you in Saskatchewan, I could have been cooped up in a little hotel room around a small table listening to a defeated Liberal premier drone on about his latest carbon tax idea, “Mr. Poilievre told supporters in a video clip posted by CTV.

“I don’t know if you have seen the picture of this thing they are putting on. It looks like they are playing a little game of cards except there are no cards. I’d rather be out here talking to real people.”

Ms. Lewis and Mr. Poilievre both face $50,000 fines from the party for skipping the debate.

Ms. Lewis’s press secretary, Michael Hettrick, said in a statement that, “Dr. Lewis made commitments to meet with local grassroots members in person today. She is honoring those commitments.”

Previous debates were held before hearings in Edmonton and Laval, Que. When the party asked about holding a third one, the members voted in favour. It was in a studio without an audience. Party president Rob Batherson moderated the event, which featured sections in French and English.

“I can win a majority government and that’s what we need,” he said in his opening remarks.

Mr. Aitchison highlighted his credentials as a former mayor and his plan to end the country’s housing crisis, which he calls his “YIMBY” plan, focusing on building new homes. He also called for taxes to be “simple, predictable, fair, and low.”

Mr. Baber opened by speaking about what he called the mental health “catastrophe” in Canada, and saying he would end COVID-19 restrictions. “I hear from many Canadians how hurt they are from 21st century segregation,” he said, noting that he was ousted from the Ontario Progressive Conservative caucus for opposing lockdowns.

During the largely genial gathering, the candidates debated topics including climate change, airport chaos, health care and housing. “We all get along,” Mr. Aitchison said at one point during a discussion on the environment.

However, he repeatedly pressed Mr. Charest on whether he would stick around to help the Conservatives if he does not win the leadership. The former first did not answer the question.

Pressed in a scrum after the debate on what he will do if he doesn’t win, Mr. Charest quickly dismissed that scenario.

“We’re like boxers at the end of our match. We’re in the 12th round, and we’re interrupted to say, ‘well, what will you do if you don’t [win]?’” he said. “The fact of the matter is I’m focused on one single objective – that I’m going to meet – and that’s becoming leader of the party, and then, prime minister of Canada. Period.”

Mr. Batherson said the party has received 150,000 ballots from members. The deadline for voting is Sept. 6. The winner will be announced on Sept. 10.

The Conservatives recently said membership has reached 678,708, a record for a Canadian political party.

That compares with more than 269,000 people registered for the 2020 Conservative leadership race – a record for the party at that time.

Also, Mr. Poilievre received the most contributions of the leadership candidates in the second quarter. He has, according to Elections Canada, raised just over $4-million, while Mr. Charest raised almost $1.4-million.