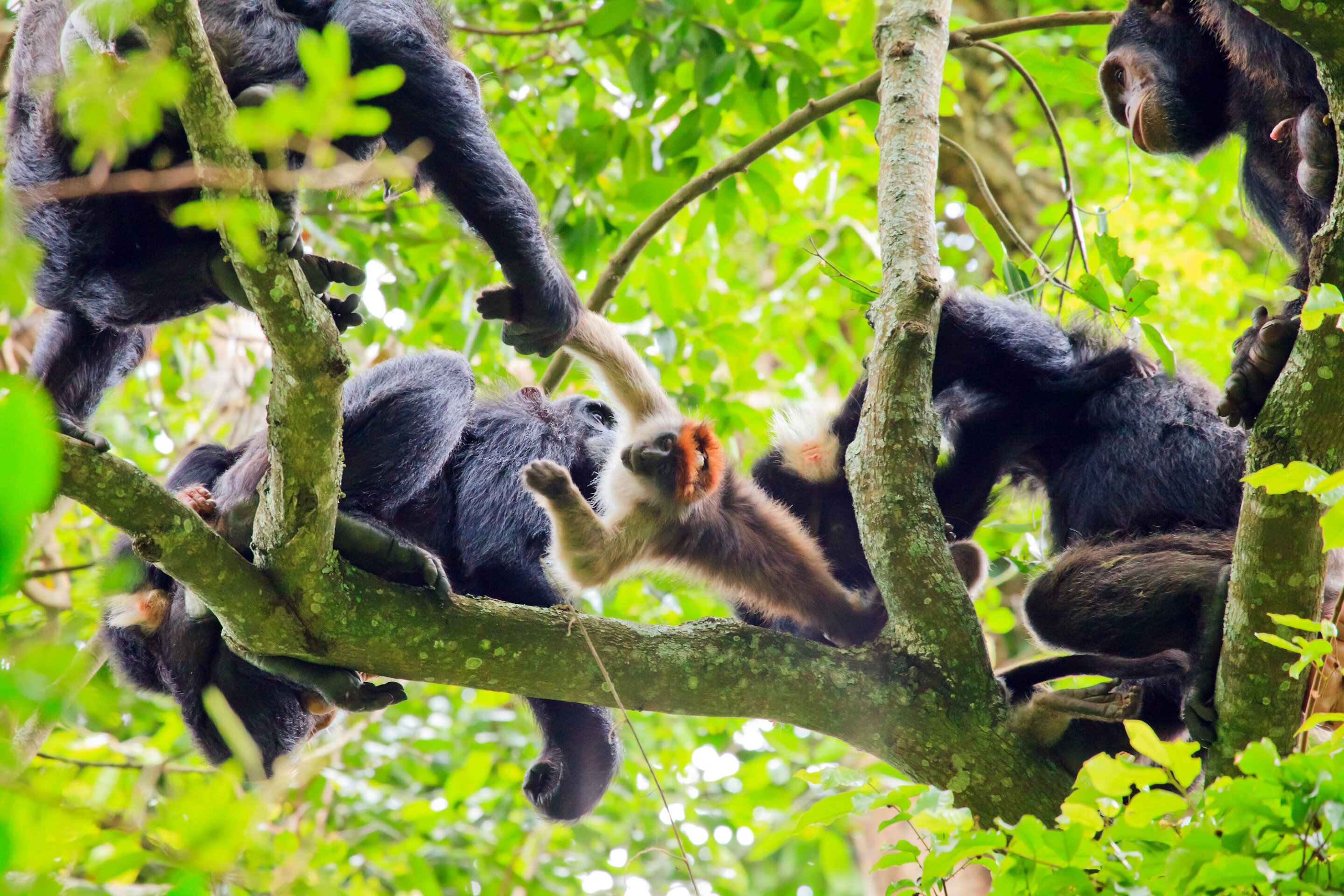 Similar to humans, chimpanzees use communication to coordinate their cooperative behavior—such as during hunting. When chimpanzees produce a specific vocalization, known as the “hunting bark,” they recruit more group members to the hunt and capture their prey more effectively, researchers at the University of Zurich and Tufts University have now shown.

Chimpanzees don’t only forage for fruit, from time to time they also seek out opportunities to acquire protein-rich meat. To catch their agile monkey prey in the canopy, chimpanzees are better off having companions hunting alongside them. Scientists have found for the first time that communication is key to recruiting group members to join the hunt.

By studying more than 300 hunting events recorded over the last 25 years at the Kanyawara chimpanzee community in Uganda, researchers from the University of Zurich (UZH) and Tufts University in Boston have discovered that by making bark vocalizations, the wild apes catalyze group hunting, rendering this form of cooperative behavior more effective. “Chimps who produce hunting barks provide information to those nearby about their motivation to hunt, and this information may persuade reluctant individuals to join, boosting the overall chances of success,” says Joseph Mine, Ph.D. student at the Department of Comparative Language Science of UZH, who led the study.

Hunting monkeys as a group in dense tropical rainforest where visibility is restricted can be challenging. Vocal communication allows more efficient group work. “Strikingly, following the production of hunting barks, we observed more hunters joining, greater speed in beginning the chase, and a shorter time to make the first capture,” says study co-last author Zarin Machanda from Tufts University, who heads up the Kanyawara Chimpanzee Project.

Although hunts are more effective following a bark, more research is needed to find out why the barks have this effect. “At the moment it is still unclear if these barks are given intentionally to coordinate the precise actions of the group, or whether these barks simply advertise an individual’s decision to hunt, which in turn, increases the likelihood of others joining them and with more hunters they are more effective,” adds UZH professor Simon Townsend, who helped lead the study.

Co-evolution of communication and cooperation

The evolutionary biologists considered a wide array of other factors that may affect the outcome of a hunt, including the presence of skilled hunters as well as potential distractions, but the occurrence of hunting barks retained a key role. “Communication plays a key role in coordinating complex acts of cooperation in humans, and this is the first indication that vocal communication might also facilitate group cooperation in our closest living relatives,” says Townsend.

It is widely accepted that communication and cooperation are tightly linked and co-evolved in humans. Over time, as one became more complex, so did the other, generating a feedback cycle which ultimately led to language and the uniquely complex forms of cooperation modern humans engage in.

However, it was unknown how far back into humans’ evolutionary past this relationship between group cooperation and communication can be traced. Joseph Mine concludes: “Our results indicate that the relationship between vocal communication and group-level cooperation is ancient. This link seems to have been in place for at least 7 million years, since our last common ancestor with chimpanzees.”

Provided by University of Zurich