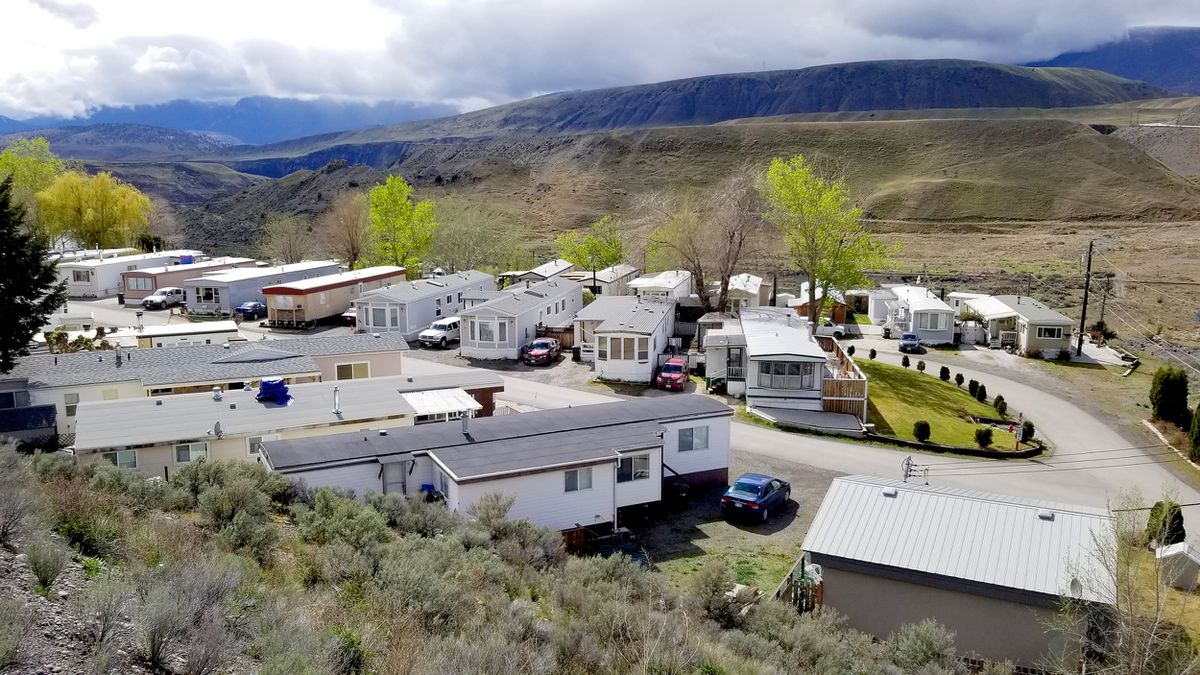 Martin Hayter had planned to retire from London, Ont., to a new condo in Vernon, BC, until he discovered a brand new manufactured home park 20 minutes away, on Okanagan Lake.

The 60-year-old retired counselor rented out the one-bedroom condo in Vernon, which he bought two years ago. He then purchased another studio unit to rent out as well. The rents cover his mortgage and other expenses, and he’s only paying $350 a month for the modular home pad fee, which is less than the condo fees he was paying in London.

His new 672-square-foot modular home set him back $190,000 including tax. The home is basically a box, and the gravel landscaping doesn’t offer much curb appeal, but he has plans to add a deck. Inside, the home has the modern features of most condos, which suits his minimalist lifestyle. It’s also a five-minute walk to the lake, which has spectacular views. The new park is still under development, with new homes coming in around it.

“I’ve only been here a couple of months, so I’m completely new to this, but I’m generally pretty happy with it. It’s like a medium between owning a house and a condo,” Mr. Hayter says. “And it frees up my money so that I can travel, which is my biggest expense.”

By province, BC has the highest number of mobile homes in Canada at 51,100, according to data supplied by Andy Yan, director of Simon Fraser University’s City Program. According to the Manufactured Home Park Owners Alliance of BC, there are about 900 home parks in BC

In the midst of an affordability crisis, manufactured home communities (MHC), as they are known in the industry (the words ‘trailer park’ are verboten), are coming into their own. The demographic is changing, driven by downsizers and young families, drawn by better quality houses and low expenses compared to living in an urban core. The pad fee, which is the rent to the landlord, is typically $200 to $400 a month, although it’s often much higher when it’s closer to an urban centre, but taxes are still low.

Mr. Hayter has a 35- by 100-foot lot, says the park owner, Ted Davies, who inherited four acres of Okanagan Indian Band land. Mr. Davies, whose home base is Langley, is putting in higher-end homes on large lakefront lots to appeal to the new demographic. So far he’s sold to mostly single people, but he has young couple renters, too, from Kelowna, as well as other provinces and the Lower Mainland. Prices of the homes are going up, but so is everything.

“I wish I developed five years ago. It would have been a heck of a lot cheaper. Everything is doubling in price,” Mr. Davies says.

A manufactured home in West Vancouver at 248 Tyee Dr., near Park Royal and on a treed lot with a lush garden is currently listed for $239,000. The 903-square-foot two-bedroom home, built in 1965, has a pad rental of $865, including cable, and a tax bill of $450 for last year. The downside is, there is no financing, so it’s a cash only deal. When you’re renting the land under your home, financing can be tricky to obtain.

That might be why downsizers are the bulk of the new buyers, although there are young people moving into parks, as well, says Eugen Klein of the Klein Group. Mr. Klein owns two parks of his own and specializes in the sale of manufactured home parks. About 30 parks a year sell each year on average in BC, and there are about 900 parks in total. Investors, including family run corporations and Real Estate Investment Trusts, increasingly see them as safe long-term investments.

Because they are usually in secondary markets, the land is relatively inexpensive and the development cost is much lower than a condominium or apartment building. Returns might be lower, but so are operating expenses and the turnover of residents. Because residents maintain their own homes, there’s relatively little operating cost. Residents stay far longer than the average apartment renter because the homes aren’t that mobile. Moving a modular home can cost tens of thousands of dollars. As well, because the homes are factory built, they’re considered more sustainable.

Dana Schmidt, who’s in her 20s, is a second-generation MHC landowner, and she’s been working for the family-run business for five years. During that time, she’s come to know many of the residents, and considers herself part of the community.

“I believe MHCs provide the home ownership that most people desire to have, as well as an actual backyard,” Ms. Schmidt says. “In the past five years, I would say that the demographic has changed. I personally notice it among individuals my age. The big question at this point in our lives is, ‘where can we afford to buy, if anywhere at all?’ I believe affordability, and sustainability, are two very important aspects of manufactured homes that are now being appreciated and noticed more and more.”

Mr. Klein says because modular construction has is evolved to a higher standard, there is a wealthier demographic now looking to MHCs. Also, because of the pandemic people bought into secondary markets and MHCs in search of space and affordable housing.

“You see younger people coming in because of affordability for sure, and families, and you also see people retiring – and it doesn’t mean it’s people without money,” Mr. Klein says. “We have a couple of people in our parks that I would classify as millionaires. They have assets, they have cash flow properties, and [the park] that’s their primary residence where they live. When you ask them why they are living that lifestyle, it’s because it keeps their financial footprint very low, and their lifestyle very high. Also, when they go away, they don’t need to be worried about locking their home up as much, because they are in a gated community.”

Manufactured home parks are attractive to investors because they don’t have the high costs associated with denser areas, such as municipal development fees, regulations, construction costs and permitting times. Innovative factory-built modular housing is also stacked for hotels and mid-rise apartments.

In terms of efficiency, he likens it to the “tiny house” movement, even though newer modular homes can be 2,800 square feet.

Mr. Klein’s family has owned a housing park in Merritt for 30 years. He says it is a very stable ownership model.

“If the market shrinks in any community, the middle cost housing won’t lose people as easily,” he says. “Also, people will move into it and want that type of housing, so as the market goes up and down in our community in Merritt, we don’t lose tenants very often, and in fact we gain them.

Al Kemp is executive director of the Manufactured Home Park Owners Alliance of BC, and he’s worked as a rental housing management consultant for 25 years. His organization represents 400 of the 900 or so manufactured home parks in the province.

Very few of them ever close down due to redevelopment. He’s seen maybe two or three get closed. There’s one in Grand Forks that’s on a flood plain that might close, for safety reasons. But if a park does shut down, the legislation that governs their industry says that once the permits have been obtained for redevelopment, the homeowners get 12 months notice and a minimum $20,000 in compensation.

They represent about 10 per cent of the residential housing industry, but government largely ignores them as a source of affordable housing, he says. He says he tried to appeal to the province that they should free up some crown land for more communities, but never got an answer. Owners can typically fit five to eight homes per acre, he says.

A lot of members are family corporations and the parks have been in the family for two or three generations, he says.

“The fact that the family corporation is in the business and the corporate sector is telling you it’s a viable investment as well,” Mr. Kemp says.

“I believe that more and more people are realizing that the stigma attached to the original type of ‘t-park’ is no longer even remotely accurate.”

Your house is your most valuable asset. We have a weekly Real Estate Newsletter to help you stay on top of news on the housing market, mortgages, the latest closings and more. Sign up today.