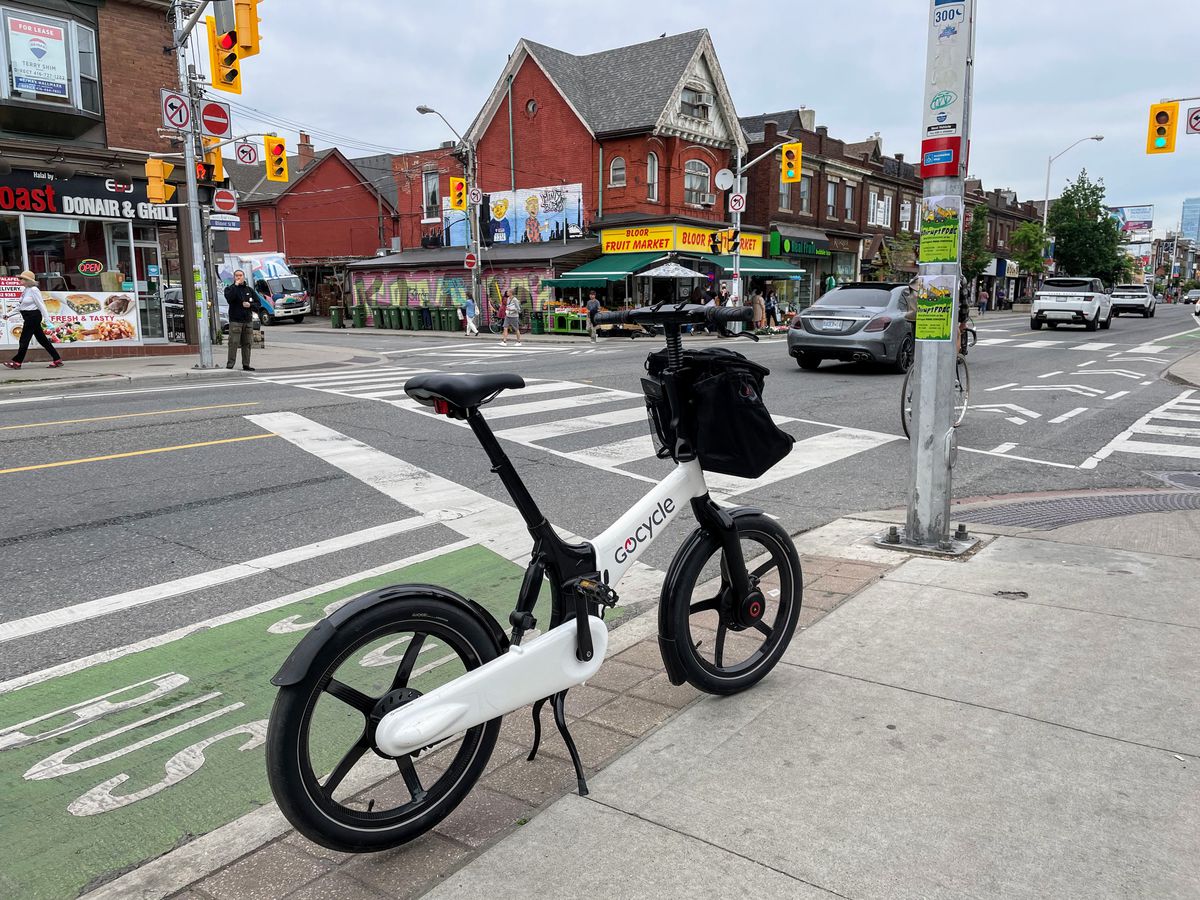 Amid soaring gas prices and a return to sloth-speed traffic, electric bicycle industry insiders say demand and interest is booming – and it’s easy to see why after trying one.

Zipping past gridlocked cars without breaking a sweat and never worrying about where to park downtown is a luxury that’s hard to give up, as I discovered after living with a high-tech e-bike for a week.

Riding is the easy part, though. Choosing an e-bike – also known as a power-assisted bicycle – is the hard part, especially if you’re not a cyclist or aren’t well-versed in the pros and cons of, say, mid-drive versus hub- drive motors.

E-bikes can be an expensive purchase, ranging from $1,500 to $15,000, and there are certainly pitfalls new riders will want to avoid.

As with choosing a car, picking an e-bike means knowing what you’d like and then making compromises. The compact folding Gocycle G4i+ that I test rode was created by a designer who previously dreamed up supercars at McLaren. So, as you’d expect, the G4i+ is an exotic-looking $9,099 machine with ultralight carbon fiber wheels, a handlebar that has a built-in display, and an app that lets you fine-tune the motor’s output, among other things.

While full-sized e-bikes can tip the scales at 30 kilograms, the compact Gocycle weighs 17, which is light enough for a reasonably fit person to carry up stairs, and it folds up to fit in the trunk of any car. On the other hand, its small wheels are easily thrown off course by bumps and ruts, and its small 375-watt-hour battery means a real-world range of around 60 kilometers. The Gocycle is great for scenic weekend rides, but less good as a grocery hauler.

E-bikes come in all shapes and sizes, running the gamut from squishy, ​​full-suspension mountain bikes, to road bikes, to apartment-friendly folding bikes, to long-range bikes for delivery riders, to upright city-bikes for commuters, as well as huge e-cargo bikes that can haul children and/or groceries. What type of e-bike you buy depends on what you want to use it for, and where you’ll park it. (Forget trying to carry that e-cargo bike up stairs.)

The next thing to consider is how you’ll get your e-bike tuned and repaired. Before buying a bike online, ask about local service centers and spare-parts availability. If you buy in a shop, ask about their repair process for e-bikes, and whether they even have one.

The most common problems with e-bikes are the same as those encountered with conventional bikes: flat tires and worn-out brake pads, says Kevin McLaughlin, founder and chief executive officer of Zygg Mobility Inc., a Canadian company that operates and services a fleet of 800 rented e-bikes.

With fat-tire e-bikes or big scooter-style models that don’t use common bicycle components, it means your local bike shop might not even have a spare tire, let alone a compatible battery.

Timm Harding, director of operations at Toronto bike shop Curbside Cycle Inc. – which sells both electric and conventional bikes – often has to turn away riders on scooter-style e-bikes (scooter-style models are more like an electric motorcycle or moped than a bicycle) because the largest bicycle-industry suppliers don’t carry parts for them. (Full disclosure: Curbside Cycle is owned by an old friend of mine.)

“A lot of bike stores don’t want to service a really inexpensive [e-bike] because it really isn’t designed to be serviced,” McLaughlin says. In other words, if you buy a cheap, no-name kit that promises to turn any bicycle into an e-bike, you may be on your own when it comes to repairs.

The popular direct-to-consumer e-bike brand Rad Power Bikes Inc., a US-based company that sells several e-bikes for less than $2,000, offers service through third-party mobile repair providers, including Velofix. The bikes can also be serviced at select independent shops, but you must e-mail Rad Power to find them. I did, and a company representative suggested nearby shops, but warned me some of them won’t repair the bike’s electrical components. If a shop won’t repair the electrical bits, they have other support options: book a mobile repair appointment, get online support or take it to their one Canadian showroom in Vancouver.

Do your homework. Look for good warranties and avoid brands and dealers that aren’t willing to answer your questions or stand behind their product, advises Darnel Harris, an avid e-biker and executive director of Our Greenway, a Toronto-based e-bike consultancy and advocacy group.

Ah yes, range anxiety: It hits new e-bikers just as it does new electric vehicle owners. The difference is that you can always pedal a dead e-bike home, with some serious effort, which you can’t do with a car.

“I feel like the biggest Achilles’ heel [of e-bikes] is still batteries’ range,” says Curbside’s Timm Harding. “But, even in the last five years, batteries have got bigger and lighter and cheaper, and all that’s coming down from the automotive industry.”

Shimano and Bosch – two major suppliers of e-bike components – give estimated riding ranges of anywhere from 40 to 180 kilometres. Range varies wildly, depending on the size of the battery, the motor, the weight of the bike and rider, how hilly the terrain is and how much electric assist you use. (In eco mode, your pedaling will be doing most of the work. In sport or turbo modes, the motor will be doing the heavy lifting.)

Bosch has a detailed e-bike range calculator online that gives a rough sense of how far you could go, adjusting for all the variables, even wind speed and temperature.

Unless you’re planning on following the Tour de France, most e-bikes will have plenty of range for commuters or recreational riders. “If you’re not working [as a delivery rider]you probably don’t need to get the biggest battery available,” says Zygg’s Kevin McLaughlin.

When it comes to a bike’s electric motors and controllers, McLaughlin advises prospective buyers look for e-bikes with components from major manufacturers, including Bosch, Shimano and Brose. They’ve been proven to be more reliable, he says. And, because they’re so ubiquitous, they’ll be easier to fix locally. (He learned the hard way; in Zygg’s fleet, many of the custom-built motors failed on e-bikes from General Motors’ now-defunct Ariv brand.)

There are two basic types of motors, each with its own long list of pros and cons. Hub motors are in the middle of wheel (either front or rear), while mid-drive motors are located between the pedals. The former are generally less expensive, while the latter can take advantage of a bicycle’s gears to operate more efficiently and allow for easier flat-tire repairs.

Mid-drive motors feel more natural, like a normal bicycle that’s magically easy to pedal. Hub motors often have a slightly delayed response and then a powerful kick, almost like an old car with a turbocharged motor, McLaughlin says.

Laws of the land

Across Canada there are, unfortunately, a mess of differing regulations covering what qualifies as an e-bike and where they can be ridden. The only federal limitation is that e-bikes are limited to a top motor-assisted speed of 32 kilometers an hour.

“I don’t think a consumer needs to worry they might buy an e-bike that’s not legal in Canada,” says McLaughlin, whose Zygg fleet operates in Ontario and British Columbia.

Regulations are still evolving across the country, and nobody is checking a bike’s serial number to see whether it’s legal, he says. Nevertheless, check local e-bike bylaws in your municipality to see where you can ride.

The bigger issue for those who want to buy an e-bike, McLaughlin says, is simply a lack of availability caused by the pandemic bicycle boom and ongoing supply-chain and shipping problems. “You still may run into problems of not actually being able to get the bike you’ve researched,” he says.

Timm Harding of Curbside Cycle has seen demand skyrocket recently. “Four years ago, we really struggled to sell e-bikes, but now I can sell $10,000 or even $20,000 e-bikes all the time,” he says.

National sales figures aren’t well tracked, but Vélo Canada Bikes – a national bicycle advocacy group – estimates the Canadian e-bike market was worth between $17-million and $22-million as of 2018. A report from Inkwood Research predicts e-bike sales in North America will grow at a compound annual rate of more than 10 per cent between 2022 and 2030, spurred by a mix of government incentives, better cycling infrastructure, the rising cost of cars and gas, and a growing awareness of environmental issues.

In other words, if you decide to jump into the e-bike market now, you’ll be in good company.

Shopping for a new car? Check out the Globe Drive Build and Price Tool to see the latest discounts, rebates and rates on new cars, trucks and SUVs. Click here to get your price.