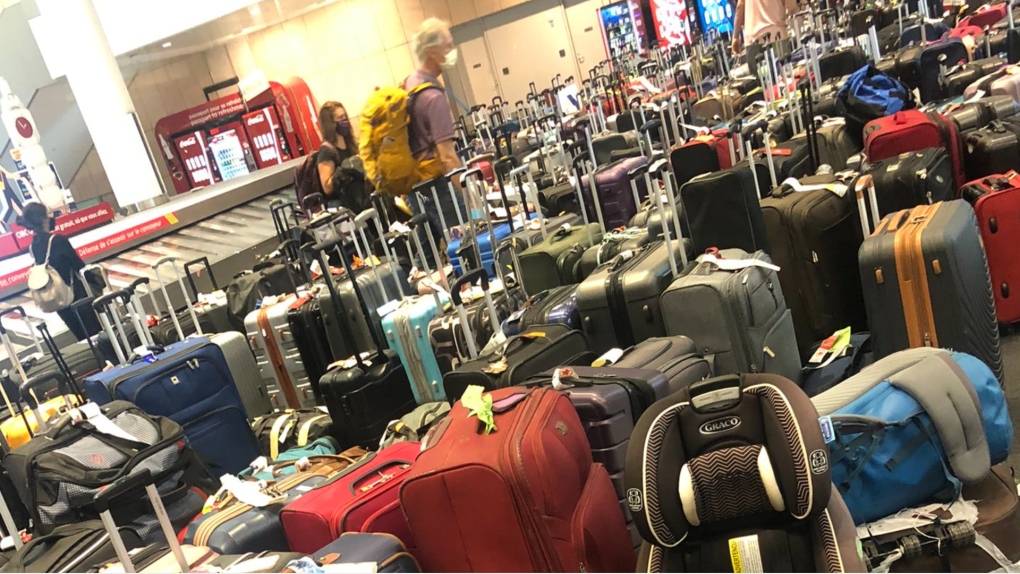 Canada’s transport minister is speaking out about the “unacceptable issues” that continues to result in significant delays at Canadian airports after images surfaced on social media showing hundreds of pieces of luggage piled up at Toronto Pearson International Airport.

The Greater Toronto Airports Authority, which operates Toronto Pearson, told CP24 on Tuesday that a number of issues over the past several days have led to “challenges with baggage,” including “flight delays and cancellations, staff shortages and temporary mechanical disruptions with the baggage system.”

So far, dozens of people have spoken out about losing their luggage at Pearson, including one woman who said that her bag was lost once on the way to Phoenix and then again on the way back to Toronto, resulting in a frustrating “suitcase scavenger hunt “that ultimately proved fruitless.

There have also been numerous images shared on social media showing huge piles of luggage in the baggage claim area at Pearson, which travelers have had to search through in the hopes of finding their missing bags.

“What we are seeing today is that while many of those Canadian Air Transport Security Authority and Canadian Border Security Agency issues have significantly improved we continue to see delays, cancellations and luggage issues,” Transport Minister Omar Alghabra told reporters at an unrelated announcement on Wednesday .

Toronto Pearson has been plagued by delays for months now amid increased demand and some staffing shortages.

Alghabra said at this point the federal government has done everything in its control to address the issues at airports, including increasing staffing at customs and at security checkpoints.

He said that his government is also looking at “possibly extending the suspension” of random COVID-19 testing, which was supposed to be lifted on July 1.

That, he said, is because it is taking longer than expected to address the logistics of moving the testing off-site.

“What we are seeing is the surge of demand for air travel beyond what anybody expected and that is honestly good news. But the surge in demand is outpacing the ability for airlines and airports to enhance the resources that they need to accommodate that surge,” he said. “So we are working with airlines and airports to ensure that the resources needed, that the scheduling adjustments that are needed are addressed. Because we are also seeing extreme peaks at certain hours of the day.”

Many of the luggage issues at Toronto Pearson have reportedly involved Air Canada flights.

In a statement provided to CP24 on Tuesday, Air Canada said “that avoiding baggage delays is a top priority” as they are “disruptive and inconvenient” for customers and lead to added costs that the airline ultimately has to bear.

But they said that with the “well-documented issues” plaguing airports and resulting in last-minute flight cancellations there are simply more instances of delayed bags.

“I think the overall record is better today at the airport than it was a few weeks ago and I think there is every reason to believe that progress will continue,” Toronto Mayor John Tory told reporters at a news conference on Wednesday.

“I am not personally familiar with the precise way baggage is handled but certainly from my limited knowledge it occurs to me that most of the responsibility rests with the airlines, so I will, undertake in light of what has happened to be in touch with Air Canada and find out from their perspective what the problem is, what they are doing to solve their part of it and if they believe that governments in the broadest sense can be helpful in making things work better so those baggage issues don’t arise.”