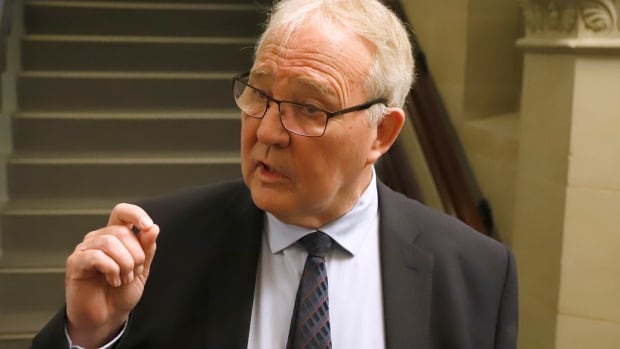 Bill Blair said that while serving as public safety minister it was his job to gather information about how the RCMP was responding to the worst mass shooting in Canadian history, but says he did not interfere politically in the investigation.

Blair, who is now serving as emergency preparedness minister, was dogged by questions from reporters Wednesday about a letter Lia Scanlan, the former communications director for the Nova Scotia RCMP, sent to Commissioner Brenda Lucki.

Sent around the one-year anniversary of the shootings, and released publicly on Tuesday, the letter alleges Lucki told staff in Nova Scotia that she was under pressure to go public with the types of weapons used by the gunman in the rampage that killed 22 people .

The letter references a meeting between Lucki and Nova Scotia RCMP staff on April 28, 2020 where Scanlan says Lucki informed the group of “the pressures and conversation with [then public safety] Minster Blair.”

“I remember a feeling of disgust as I realized this was the catalyst for the conversation,” Scanlan said in her letter dated April 14, 2021.

“I could not believe what you, the leader of our organization, was saying and I was embarrassed to be privy to what was unfolding. It was appalling, unprofessional and extremely belittling.”

Blair repeatedly said there was no interference and “no pressure brought to bear with respect to the investigation.”

“My job as then minister of public safety was to ensure that information on behalf of the government of Canada was gathered with respect to the police response,” he said.

Campbell alleged that Lucki said she had promised Prime Minster Justin Trudeau and Blair the RCMP would release information on the types of weapons used by the shooter.

He also noted that Lucki expressed “this was tied to pending gun control legislation that would make officers and the public safer.”

Campbell’s notes also said he felt releasing information about the types of weapons could risk jeopardizing the investigation into how the shooter obtained his weapons.

WATCH: Liberals remain adamant there was no interference in RCMP investigation into Nova Scotia shooting:

June 23, 2022 – Government House Leader Mark Holland reiterates that the federal government did not interfere in the RCMP investigation into the 2020 Nova Scotia mass shooting, but the opposition is pushing a committee investigation into the allegations. The new Ukrainian Ambassador to Canada Yulia Kovaliv discusses her country’s bid for EU membership.

Scanlan wrote that within the Nova Scotia division, the RCMP committed to sharing any new information with the victims’ families before the media to prevent them from being re-victimized, and the gun details had not yet been shared with them.

‘It was all political pressure:’ Scanlan

It’s not the only time Scanlan has made allegations of political pressure.

In an interview with commission investigators earlier this year, she said Blair and the prime minister “were weighing in on what we could and couldn’t say.”

She said Lucki was advised not to do media interviews but did anyway, and in so doing, gave inaccurate information

Lucki initially shared that 17 people died, information RCMP had confirmed internally, when the local commanders only said “in excess of 10” people lost lives in a press briefing the evening of April 19.

“She went out and did that and knew damn well – and it was all political pressure,” said Scanlan.

“That is 100 per cent Minister Blair and the prime minister and we have a commissioner that does not push back.”

Besides Scanlan’s letter, the commission also released handwritten notes from former assistant commissioner Lee Bergerman who has since retired from the role she held as the commanding officer of the Nova Scotia RCMP, and Chief Supt. Chris Leather, who was the second-in-command in April 2020, on Tuesday.

Bergerman’s notes listed who attended the meeting on April 28, 2020 and included the phrase, “angry about lack of detail about guns,” but not who made the comment.

Leather’s notes said the meeting with Lucki was about “firearms used,” and noted “adjustment to include firearms information into speaking notes.”

He also noted a topic that came up was concern about “information flow.”

Lucki regrets the ‘effects of my words’

In a statement issued Tuesday night, Lucki said she was frustrated by the flow of information after the shooting but maintains there was no political interference.

“It was an extremely difficult time and I did express frustration with the flow of information. I regret the effects my words had on those involved in that meeting,” she wrote.

“I know there are questions about political interference. There was certainly a need for an exchange of timely and accurate information with the government of Canada and I endeavored to do that. However, I want to re-emphasize that I did in no way seek to interfere in the ongoing investigation, nor did I feel any political pressure to do so.”

Blair said he was not private to the conversations Lucki had with his staff,

“The commissioner of the RCMP has also acknowledged that she had a difficult conversation with her own people,” he said.

“But I can tell you with absolute certainty, I and my government did not give any operational direction or interfere in any way with the investigation or the police response.”

The claims have conjured up a political storm in Ottawa and resulted in an upcoming parliamentary hearing to address allegations of potential political interference.

At a separate news conference Tuesday the current minister of public safety, Marco Mendicino, was asked if this latest scandal has damaged trust in the top Mountie.

“Well, on the easiest of days being the commissioner of RCMP is tough. It’s a big job,” he said.

“I know that the commissioner works every day to work with her leadership team as well as rank-and-file RCMP members.”

Lucki is expected to appear before the Mass Casualty Commission this summer where she will testify under oath.

Michael Scott of Patterson Law, the firm representing the families of most shooting victims, said he was concerned about possible political interference. He said it would be helpful for those in the April 28 meeting to confirm “exactly what was said” to remove any debate on that point.

“Then we’re going to have some real questions about what involvement the RCMP from headquarters in Ottawa had into this investigation, because we would be extremely concerned about using the mass casualty event as some sort of political opportunity,” Scott told reporters at the inquiry Tuesday.