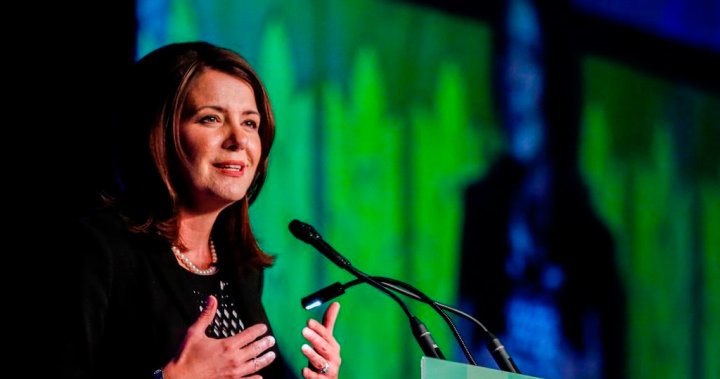 One of the front-runners to replace Jason Kenney as Alberta’s premier says if she wins, legislation would come this fall to ignore federal laws along with steps to create a provincial police force and tax-collection agency.

Danielle Smith said the legislature would need to pass an Alberta sovereignty act as soon as possible to allow Alberta to reject federal dictates on COVID-19, such as ordering vaccine shots for children or third doses for all.

Alberta premier refutes separation threats: ‘Either you love your country or you don’t’

She also said it’s imperative to get the ball rolling on an Alberta police force and a separate agency to collect taxes — necessary to give teeth to the sovereignty legislation — because they are multiyear initiatives.

“We want to have clear legislation so that (federal officials) understand that we’re just not going to pass policy that violates Albertans’ rights,” Smith said in an interview.

“That would be a mechanism so that they know we’re serious about enforcing our jurisdiction.”

The Alberta sovereignty act would grant the legislature discretion to refuse to enforce federal laws or court decisions it deems an intrusion on provincial rights or a threat to provincial interests.

Smith said with Alberta’s economy and population growing, it’s critical to act now to send a message to the federal government, and to her United Conservative Party membership, that the time for mere saber rattling is over.

She said she is not being a trailblazer, but following in the footsteps of provinces such as Quebec and British Columbia, which have chosen to reject with impunity Ottawa’s dictates on policies from drug laws to pipelines.

She said the UCP has the mandate to implement such sweeping legislation immediately rather than run on it as a platform in the May 2023 election.

1:08
Kenney says he won’t allow repeat of ‘lake of fire’ incident when responding to question about Danielle Smith

Kenney says he won’t allow repeat of ‘lake of fire’ incident when responding to question about Danielle Smith – Apr 1, 2022

She pointed to a provincial referendum last fall in which almost 62 per cent said they wanted to see equalization removed from the Constitution.

She also highlighted a Fair Deal Panel that issued a report two years ago urging the province to pursue autonomy issues such as an Alberta pension plan and police force.

“There has been enough conversation around this that I have a pretty good gauge of where people are at,” Smith said. “It seems to me we do have a mandate to move.”

In Calgary, Opposition NDP Leader Rachel Notley said Smith has no mandate to pursue such “extreme policy positions.” She said the UCP should be focused on fixing problems for Albertans, such as health-care wait times and rising costs due to inflation, rather than “pretend fights with Ottawa.”

They said not only would such a sovereignty law be “fundamentally unlawful,” it would take a wrecking ball to Canada’s constitutional order, the separation of powers and to the rule of law that underpins a healthy democracy and guards against “arbitrary state power.”

“The Alberta sovereignty act sets a dangerous course in that direction,” write Martin Olszynski, Jonnette Watson Hamilton, and Shaun Fluker in their analysis. Fluker is also running for the NDP in the 2023 election.

Olszynski said in an interview Thursday that while there are concerns and debate over how other provinces interpret or enforce federal laws, “it is unprecedented in modern Canadian history for a political movement to declare that they will ignore the courts.”

He added that politicians talking this way should not be tolerated.

The sovereignty act is the centrepiece policy proposal of the Free Alberta Strategy.

They argue that federal laws, policies, and overreach are mortally wounding Alberta’s development.

They urge a two-track strategy to assert greater autonomy for Alberta within Confederation while simultaneously laying the policy and administrative groundwork to transition Alberta to separation and sovereignty should negotiations fail.

On the ballot: Equalization referendum largely misunderstood by Albertans

Smith is one of eight candidates running in the contest to replace Kenney as party leader and premier.

She is a former leader of the Wildrose Party, which merged with Kenney’s Progressive Conservatives in 2017 to create the current UCP.

The winner will be named Oct. 6. Early polling suggests Smith is one of the favourites.