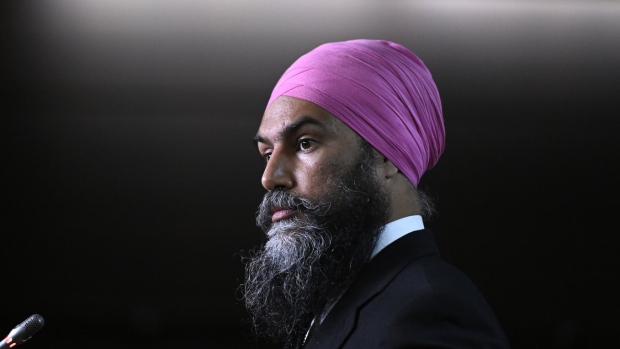 A confidence and supply agreement reached between the Liberals and NDP three months ago changed the dynamic of the House of Commons, even in a parliamentary sitting that will mainly be remembered for the axing of another Conservative leader, and the further polarizing of Canadian politics by a convoy against pandemic restrictions.

The agreement, however, means MPs head off for the summer barbecue and parade circuit without having to prepare for a known or potential federal election in the fall for the first time in four years.

The NDP and Liberals describe the agreement as a success to date. For the Conservatives and Bloc Québécois, the agreement has been a recipe in frustration, shutting them out of many House negotiations because the Liberals no longer had to wonder which opposition party would be their dance partner.

Under the agreement announced March 22, the NDP offered to support the government on most confidence votes and the Liberals agreed to co-operate on some NDP priorities.

In the months since, the NDP did in fact vote with the government on confidence bills, including the budget, but also on a number of non-confidence matters. NDP MPs helped the government limit debate on some bills and get others, including controversial changes to the Broadcasting Act, through the House and onto the Senate.

The Liberals did move on some NDP priorities including by putting a national dental-care program in the federal budget, and some housing programs.

“So little is actually in the supply and confidence agreement,” he said.

NDP Leader Jagmeet Singh said Wednesday he felt the agreement worked as he had hoped, and is confident he will continue to deliver for NDP priorities over the coming months.

But he warned that if Prime Minister Justin Trudeau does not deliver, he would be prepared to pull NDP support for the Liberal minority government. He said he intends to push the government hard to deliver more to help Canadians struggling under the weight of near-record inflation.

“We have made it very clear we need to see additional supports as well,” he said. “The agreement lays out a floor … but it doesn’t set a ceiling of what we can ask for or what we can fight for.”

Singh and Trudeau met several times as is required by the agreement, and co-operation and information-sharing between the parties is said to have been good.

Liberal MP Rob Oliphant, the parliamentary secretary for foreign affairs, said from his viewpoint the agreement energized Trudeau and the Liberals, who could move on their priorities without the constant threat of being defeated.

“I think it’s put a bit of a spring in his step,” said Oliphant in an interview. “I see him really engaged in the last couple of months, where there was a couple of months where I wasn’t sure he was as engaged.”

Oliphant said the agreement had the opposite effect on the Conservatives, setting them “adrift.”

“What that does is it takes the wind out of the sails of the Conservatives, because they know that they’re not able to defeat us easily,” he said. “And I think that they don’t know what to do with that.”

Opposition House leader John Brassard had somewhat similar sentiments in a scrum with reporters on Tuesday.

“It definitely, there’s no question about it in my mind, changed the entire dynamics for our particular leadership team,” he said.

The Conservatives characterize the confidence and supply agreement as a coalition government of the NDP and Liberals, effectively giving the Liberals the majority they failed to win in the 2021 election.

It also meant the end of any discussions the Liberals had with the Conservatives, said Brassard.

“The official Opposition was effectively being shut out,” he said. “We were the last to hear about many of the things that were happening within the House of Commons because the Liberals would just simply go to the NDP and say, ‘This is what we want to do,’ and get their agreement.”

There were occasional signs of co-operation among more than one party, with all MPs voting in favor of legislation to ensure seniors receiving the Guaranteed Income Supplement and COVID-19 benefits didn’t have money clawed back.

Amid it all the Conservatives were engaged in internal strife, as their third leadership race in six years ugly bare some deep divisions within the party.

Erin O’Toole was voted out as leader by caucus in early February, just as a convoy of Canadians blockaded the streets around Parliament Hill and multiple border crossings, demanding everything from the end to all COVID-19 restrictions to the ouster of Trudeau.

The convoy has colored much of the political landscape throughout 2022. Ongoing inquiries and committee hearings on the government’s decision to invoke the Emergencies Act are adding to the tension.

The government is being accused of holding back information that could explain its justification for the Emergencies Act. Public Safety Minister Marco Mendicino is in hot water for saying that police asked for the act to be invoked, which has been contradicted both by police and his own colleague, Emergency Preparedness Minister Bill Blair.

Movement on Liberal bills has been slow. Only four major bills passed between Christmas and Wednesday, and one of those — the fall economic statement — took so long some Canadians had to wait weeks for tax refunds that couldn’t be processed until some new tax credits became official.

Both the budget bill and new legislation that’s been sped through in response to a recent Supreme Court ruling on using extreme intoxication as a criminal defense are expected to pass before the summer break begins.

This report by The Canadian Press was first published June 23, 2022.