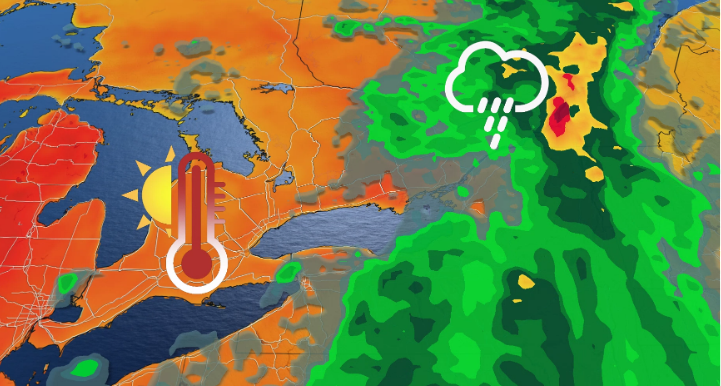 Summer wasted no time arriving in Ontario as extreme heat scorched a good portion of the province Tuesday, with peak temperatures hitting the low 30s in some areas, feeling closer to 40 with a stifling Humidex. This will persist for another day Wednesday, though not quite as hot, before moderating again on Thursday. Wednesday also features a thunderstorm threat across eastern Ontario and southern Quebec, one with the potential for torrential rainfall with between 40-60 mm possible, and localized amounts up to 100 mm. More on Wednesday’s heat and storm threat, and what lies beyond, below.

The hottest and most humid air so far this year arrived on Tuesday across much of Ontario, with temperature records broken at Toronto Pearson International Airport and feels-like values ​​that exceeded 40 in many areas. 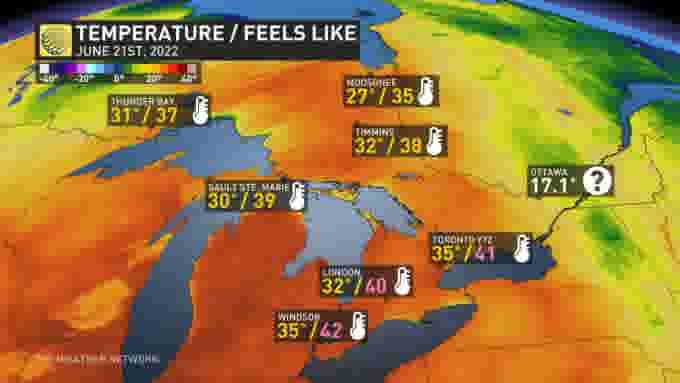 Wednesday will see much of the same heat move into eastern Ontario and southern Quebec along with a severe thunderstorm risk. The highly humid atmosphere will enhance rainfall totals, posing a risk for localized flooding before conditions cool off Thursday.

READ MORE: Make the sun work for YOU with these solar powered gadgets

A cluster of storms is forecast to develop Wednesday afternoon across parts of eastern Ontario and southern Quebec. With limited instability, most storms are forecast to stay non-severe in nature. However, a few storms may meet severe warning criteria with locally strong wind gusts and torrential rain. 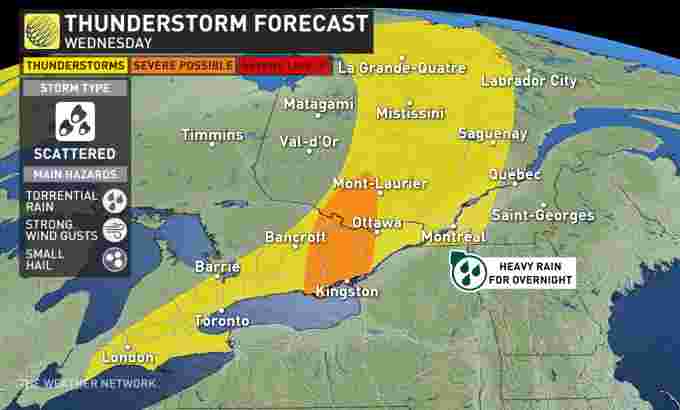 Confidence in storm development across the Greater Toronto Area (GTA) and the Niagara Peninsula is low, but isolated storms are still possible through the late afternoon hours. 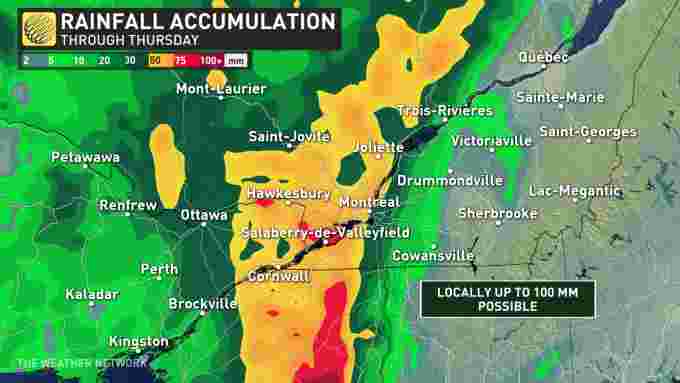 A stalled system in a high moisture environment shows potential that this narrow band of rain could amount to 30-60 mm, locally up to 100 mm, through Thursday. Flooding is a possibility, and forecasters will be closely watching the Montreal region and surrounding areas.

IT IS HOT IN SOUTHERN ONTARIO, TIPS FOR HEADING OUTSIDE IN THE HEAT

As for what’s remaining of the heat, Tuesday and Wednesday overnight won’t provide any relief with some areas remaining well above the 20-degree mark as the sun sets. It could be uncomfortable sleeps for many, even with the proper cooling equipment. Cooler air is expected to arrive by Thursday. 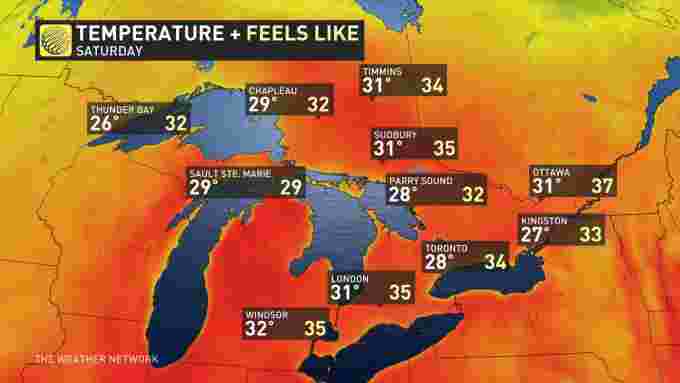 A stronger cold front will then track across the region Sunday with showers and thunderstorms followed by cooler weather for the start of next week.

Temperatures are expected to be near seasonal, possibly even a few degrees cooler than seasonal for a couple days, during the final few days of June and through the Canada Day long weekend.

Stay tuned to The Weather Network for the latest forecast updates for Ontario and Quebec.