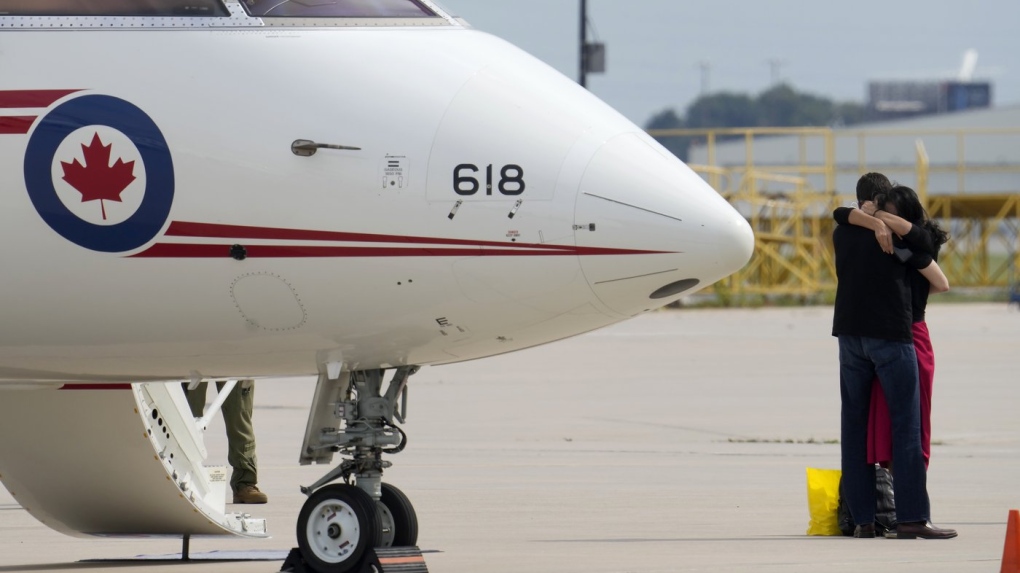 A federal unit that tracks foreign interference has identified what appeared to be a co-ordinated information campaign by Chinese state media outlets to control the domestic narrative around the return of the “two Michaels” to Canada.

Rapid Response Mechanism Canada found the effort also seemed intent on fostering confusion or doubt in Canada and internationally about what Michael Kovrig and Michael Spavor were doing in China before they were detained in late 2018.

The Canadian Press used the Access to Information Act to obtain the unit’s analysis of the September 2021 events, the latest window into a tense geopolitical drama that played out between Ottawa and Beijing over almost three years.

Several portions of the document, considered too sensitive to release, were blacked out.

Canada arrested Meng Wanzhou, a senior executive of Chinese firm Huawei Technologies, in December 2018 at the request of the United States, where she faced charges related to American sanctions against Iran.

The move clearly angered Beijing, and two Canadians working in China — Kovrig and Spavor — were arrested soon after on accusations of endangering national security, a move widely seen as retaliation against Ottawa.

Kovrig and Spavor were both convicted of spying in 2021 in closed Chinese courts. Canada and many allies said the process amounted to arbitrary detention on bogus charges in an unaccountable justice system.

The US worked out a deferred prosecution agreement in Meng’s case, allowing for her release, and Beijing permitted the two Michaels, as they came to be known, to fly home on Sept. 25.

A wide outpouring of relief from Canadians greeted their return. Typical of the sentiment was a tweet from the Canadian Security Intelligence Service: “CSIS joins all Canadians in welcoming you back to Canada.”

RRM Canada’s Sept. 28 analysis says it identified a narrative from Chinese state media outlets that claimed the two Michaels had “confessed their guilt,” were “granted bail for medical reasons” and that CSIS had inadvertently exposed them as Canadian spies.

The unit, based at Global Affairs Canada, produces open data analysis to chart trends, strategies and tactics in foreign interference. The efforts support the G7 RRM, an initiative to strengthen co-ordination to identify and respond to threats to the leading industrial democracies.

The RRM analysis notes the story said the two men were “released on bail,” “confessed to their crimes and wrote confession and repentance letters in their own handwriting,” and left China “in line with legal procedures.”

“The author adds that China’s suspicions are not unfounded and points to a recent tweet from CSIS that welcomed the two Michaels back to Canada.”

Meng walked out of a British Columbia court Sept. 24 after a judge agreed to a discharge order that withdrew the US extradition request against her.

It followed her virtual appearance in a New York court, where she pleaded not guilty to all charges and a judge signed off on the deferred prosecution agreement.

At the time, Nicole Boeckmann, acting US attorney for the Eastern District of New York, said that in entering into the deferred prosecution agreement, Meng had taken responsibility for her role in perpetrating a scheme to defraud a global financial institution.

Boeckmann said Meng’s admissions in a statement of facts confirmed that she made multiple material misrepresentations to a senior executive of a financial institution regarding Huawei’s business operations in Iran in an effort to preserve the firm’s banking relationship with the institution.

That same day, news accounts on Chinese social media platform WeChat reported that Meng would appear in US and Canadian courts and could sign a deferred prosecution agreement that would allow her to return to China, the RRM analysis notes.

“Because the full details of the DPA were not clear, Canadian WeChat news accounts reported that she would plead guilty to charges or admit to wrongdoing in misleading a global financial institution,” the analysis says. “Chinese state media did not include any of this discussion or information in their official narratives of Meng’s release.”

In response, the RRM analysis says, most mentions of what Meng had agreed to in the deferred prosecution agreement were taken down.

WeChat users would see an error message from platform developer Tencent saying, “unable to view this content because it violates regulations.”

RRM notes that this sort of message appears only when Tencent or the Cyberspace Administration of China removes content from news accounts. However, he was unable to determine which one had taken the stories down.

The Chinese Embassy in Ottawa did not respond to a request for comment on the RRM Canada report.

The University of Toronto’s Citizen Lab says China has an expansive system of censorship that includes restrictions on the internet, applications and media. Internet platforms operating in China must follow local laws and regulations regarding content controls, the research lab says.

Fen Hampson, a professor of international affairs at Carleton University, suggests the Chinese actions concerning the online dialogue about the events of last September indicate a lack of finesse.

“This shows that they’re not very sophisticated and can be pretty ham-fisted at the same time,” said Hampson, co-author with Canadian Press reporter Mike Blanchfield of “The Two Michaels: Innocent Canadian Captives and High Stakes Espionage in the US-China Cyber ​​War.”

“This is Chinese state censorship in motion.”

This report by The Canadian Press was first published June 21, 2022.