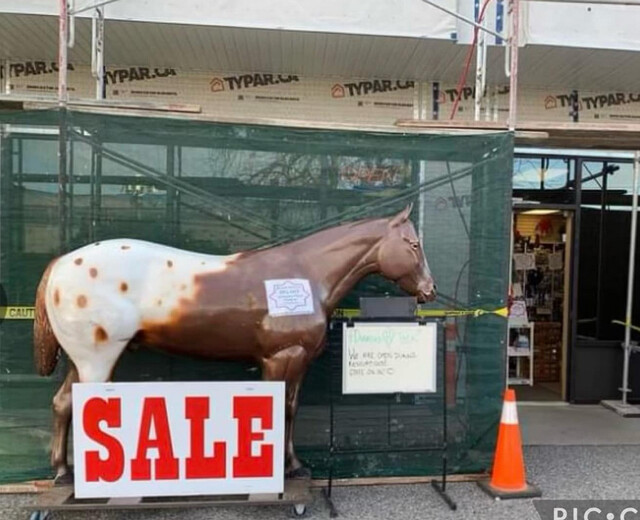 Harry the horse has been stolen in a brazen, daylight theft.

Owners are hoping the public can help get him back.

Harry, a 26-year-old light brown appaloosa with a white bum and spots on it, has been a fixture in front of Diamond H Tack on Kirschner Road for nearly three decades.

Until yesterday when thieves driving a U-Haul cube van made off with the fiberglass mascot shortly before closing time at about 4:50 pm Monday.

Surveillance video in the area shows a U-Haul pulling up in front of the business, loading the horse inside, and driving off.

One of the thieves was dressed in a red shirt and black shorts while the driver appeared to be wearing a black shirt and light pants or shorts.

They made their getaway down a back alley between BC Sportswear and Princess Auto.

Harry is a life-size horse, standing about five-feet high on four wheels and mounted on a brown steel frame,

He was wearing a white blanket with a small blue check pattern (Kool Koat detachable neck) and a navy blue rope halter.