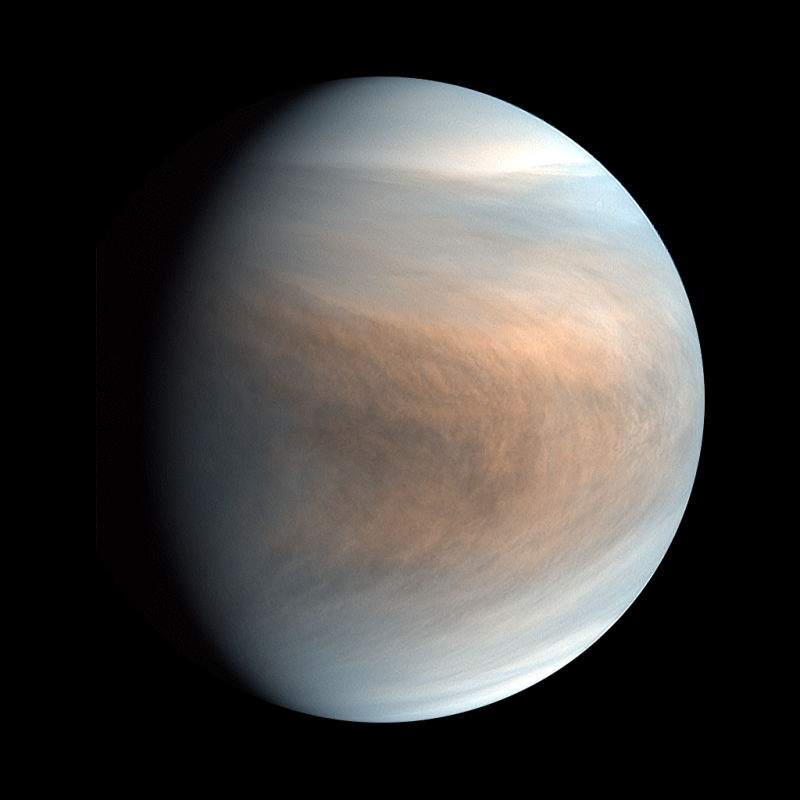 It’s hot enough on Venus to melt lead. So the planet’s surface is inhospitable to life. But its atmosphere might be a different story. In 2020, a team led by Jane Greaves at Cardiff University announced the discovery of phosphine in the planet’s atmosphere. On Earth, only microbes and laboratories produce this gas. Was phosphine a life sign on Venus? This month (June 14, 2022), researchers at the University of Cambridge said they’ve now studied whether microbial life could exist in Venus’ atmosphere. And they’ve said it’s unlikely. At the same time, other new studies from Greaves and her team reinforce the existence of phosphine. So what is phosphine doing in the atmosphere of Venus?

The researchers published their peer-reviewed findings in NatureCommunications on June 14, 2022.

Bear in mind the new Cambridge paper is likely not the final word by any means, either. And that the two other new papers from Greaves et al. now continue to maintain that the phosphine really is there, despite some other papers claiming it isn’t.

Clearly, there’s more work to do on the question of phosphine in the atmosphere of Venus, and what it means.

Life in the clouds hypothesis

The Cambridge team wanted to know if the unusual behavior of sulfur in Venus’ clouds could be the result of life. They call this the “life in the clouds hypothesis.” Scientists have theorized that microorganisms in the atmosphere might use the sulfur as a food source. They would then expel other chemicals as waste.

The problem is that scientists haven’t yet found those expected chemical fingerprints.

According to lead author Sean Jordan from Cambridge’s Institute of Astronomy:

We looked at the sulfur-based ‘food’ available in the Venusian atmosphere; it’s not anything you or I would want to eat, but it is the main available energy source. If that food is being consumed by life, we should see evidence of that through specific chemicals being lost and gained in the atmosphere.

We’ve spent the past two years trying to explain the weird sulfur chemistry we see in the clouds of Venus. Life is pretty good at weird chemistry, so we’ve been studying whether there’s a way to make life a potential explanation for what we see.

The experiments are based on the known sources of chemical energy in Venus’ atmosphere. The planet’s atmosphere contains a lot of sulfur dioxide. On Earth, volcanoes emit most of the sulfur dioxide.

Sulfur dioxide behaves a bit oddly on Venus, however. It is abundant in the lower clouds, but seems to get “sucked out” of the clouds at higher altitudes. Co-author Oliver Shorttle from Cambridge’s Department of Earth Sciences and Institute of Astronomy said:

If life is present, it must be affecting the atmospheric chemistry. Could life be the reason that SO2 levels on Venus get reduced so much?

The researchers’ models tried to explain the lower sulfur dioxide levels. They included a list of metabolic reactions that microbes would carry out in order to get their “food,” as well as the waste byproducts.

In short, metabolism in atmospheric microbes could explain the drop in sulfur dioxide levels. The problem is that the other chemical waste byproducts should also be released into the atmosphere. But those seem to be missing. That is hard to explain based on current knowledge of Venus’ atmosphere. Jordan said:

If life was responsible for the SO2 levels we see on Venus, it would also break everything we know about Venus’s atmospheric chemistry. We wanted life to be a potential explanation, but when we ran the models, it isn’t a viable solution. But if life isn’t responsible for what we see on Venus, it’s still a problem to be solved; there’s lots of strange chemistry to follow up on.

It is, however, possible that microbial life in the atmosphere would behave much differently from how scientists expect. The “habitable region” in Venus’ atmosphere also contains droplets of sulfuric acid and very little water. Of course, that might also weigh against the life theory. But it’s also possible that such life could have adapted in ways completely unknown on Earth. Could it expel chemical waste of a kind not expected?

Some previous studies have shown how microbes could exist in Venus’ atmosphere. In the theory, the microbes could remain dormant part of the time to survive the harsh conditions. This is similar to how tardigrades on Earth survive freezing, irradiation and the vacuum of space.

In addition, the Pioneer Venus mission in 1978 found evidence for phosphine (determined in a later re-analysis of the data). The analysis also found evidence for other “biologically relevant chemicals” that possible microbes could use.

Since the initial phosphine discovery, scientists have proudly debated the findings, with some other research teams also finding evidence for phosphine. Others, however, didn’t. The team led by Greaves has maintained, with additional studies, that they did find phosphine. More recent papers suggest that the amount of phosphine is lower than first thought, but still there.

This paper is still awaiting publication but includes results from the James Clerk Maxwell Telescope (JCMT). The data, from observations in 2020, show that the phosphine signal is still present. The observations were conducted with a new instrument and new technique. Greaves stated on Twitter that the data will go into a forthcoming long-term monitoring paper.

A previous recent, and published, paper from May 30, 2022, details results from both the JCMT and ALMA telescopes. It also shows that while the phosphine signal is lower than previously thought. More, about 90% of that signal is interpreted as phosphine, while only about 10% is contamination from sulfur dioxide.

You can read a good Twitter thread regarding the new findings from Greaves et al. here.

Follow this thread for live-tweets of the first plenary of #AAS240 — “Phosphine in the Atmosphere of Venus” by Jane Greaves pic.twitter.com/sbpN6jwRFh

There is also another good thread from astronomer Chris Lintott.

Intriguing result from @jgreaves6 did #AAS240 – new data from JCMT in summer of 2020, processed with new method and with a new instrument still shows signal of phosphine on Venus.

Unknown absorber and life on Venus

Another puzzle is the “unknown absorb.” This is a layer of still-unidentified particles in Venus’ atmosphere that absorbs ultraviolet light in a manner similar to some microbes on Earth. The particles are even known to be non-circular in shape and about the same size as bacteria. Their composition, however, is still a mystery.

Could these really be living organisms? Probably only a future mission to Venus will be able to answer that question. Two new missions – DAVINCI and VERITAS – are now being planned by NASA (NASA later renamed DAVINCI+ to just DAVINCI). They will launch sometime between 2028 and 2030. The European Space Agency (ESA) will also send the EnVision mission to Venus in the early 2030s.

Bottom line: A new study from researchers at the University of Cambridge suggests that atmospheric life on Venus is unlikely. The evidence for phosphine continues to mount, however, with two new separate additional studies.

Via University of Cambridge