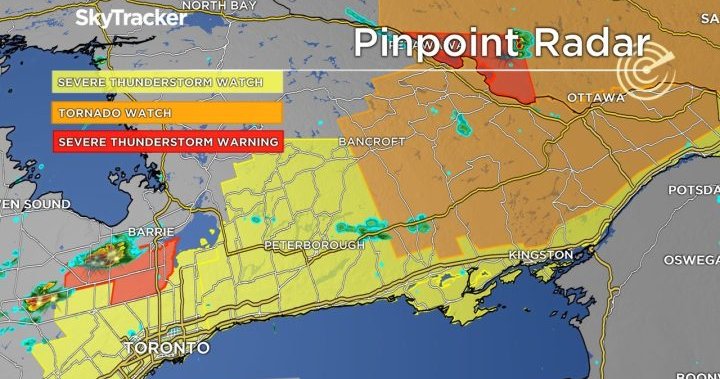 A tornado watch has been issued for parts of eastern Ontario with severe storms possible Thursday afternoon and early evening.

Environment Canada issued the watch around 11:30 am Thursday.

“Conditions are favorable for the development of severe thunderstorms which may produce tornadoes,” the weather agency said.

The Tornado watch covers the Ottawa area, and stretches to other areas west, south, and east including Renfrew, Bancroft, Tweed, Prescott and Russell, and Kemptville.

Environment Canada said tornadoes are possible, along with wind gusts of 90 to 110 km/h and nickel to ping pong ball-sized hail.

“Thunderstorms are expected to develop early this afternoon with the potential for quick intensification as they progress eastward,” the advisory read.

“A tornado or two will be possible this afternoon before the threat transitions to primarily wind. This is a dangerous and potentially life-threatening situation.”

The weather agency said those under the watches should be prepared for severe weather and take cover if threatening weather approaches.

11:50am Severe thunderstorm warning for the cell near Borden. Watches also in place including a tornado watch for parts of eastern Ontario. #onstorm pic.twitter.com/LpL8PQ78i8

2:11
Fatal May thunderstorm caused more than $875-million in damage

Fatal May thunderstorm caused more than $875-million in damage