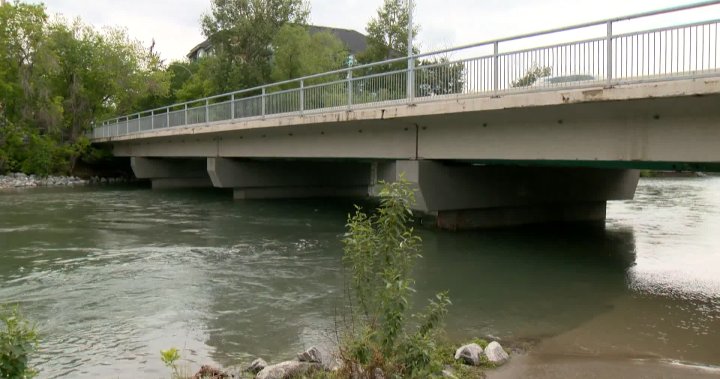 With 150 millimeters of rain expected to fall in the area by Wednesday, higher than average snowpacks in the mountains and already high river levels, the City of Calgary declared a state of local emergency (SOLE) on Monday afternoon.

“I realize that may cause some fear, some anxiety for Calgarians, especially those who went through this in 2013,” Mayor Jyoti Gondek said Monday afternoon. “I can tell you that you’re in good hands.”

Gondek said the SOLE will be in place for the next two weeks and will allow emergency responders to move quickly as needed. One example she gave was if Calgary police and firefighters needed to knock on doors of houses under evacuation orders.

“The other thing that we have the ability to do is allow our experts in the water services team to access property as needed to protect critical infrastructure. And it also offers purchasing flexibility to members of administration as needed, if we get into more severe weather,” she added.

City officials said a number of measures have already been deployed.

A berm to protect the Sunnyside neighborhood is under construction on Memorial Drive NW from Center Street NW to 3 Street NW, closing traffic along that stretch of road. Additional pumps for trouble areas and storm sewer measures have also been put in place.

Henry repeated the warning that a boating advisory is in place along the Bow and Elbow rivers, restricting boating from those tributaries. Members of the Calgary Fire Department and Calgary Police Service will be monitoring the rivers, but will be observing the advisory themselves unless needed.

“Please exercise caution around the riverbanks as the fast moving water can cause erosion and destabilization of those banks,” Henry said. “Talk to your children and talk to your family about staying away from the waterways. Cyclists and pedestrians: please watch for the low-lying areas as you will see some pathway closures.”

Minister of Environment and Parks Jason Nixon said the province is focused on getting information and forecast models out to municipalities as quickly as possible. He also Albertans encouraged to keep on top of flood warnings and advisories using the Alberta Rivers app and website.

Provincewide, there are 10 high streamflow advisories, 10 flood watches and a half dozen flood warnings.

0:39
Environment minister says Government of Alberta ready to step in to any potential flooding situation

In an online address, High River Mayor Craig Snodgrass said despite conditions like 2013, the town doesn’t expect the same river flow and flooding as nine years ago.

“As far as the infrastructure that’s built, we’re very well protected and our teams are already ready and our operations teams are monitoring this,” Snodgrass said, urging homeowners to double-check items like downspouts and sump pumps.

Nixon noted that the flood mitigation measures the province and municipalities have built since the devastating 2013 floods will help with this week’s expected events.

“We’re in a much better place than in 2013,” he said, adding work is still underway on Calgary-area projects like the Springbank off-stream reservoir and upstream protection on the Bow River.

0:39
Alberta government officials looking at ‘upwards of 150 millimeters’ of rain in 3 days

“While municipal governments typically respond to flooding and other local emergencies through the Alberta Emergency Management Agency, the government of Alberta stands ready to assist with the response, if needed.”

Jackson said her team is modeling potential changes along the Red Deer River, saying it’s not as vulnerable right now due to the impact of the Dixon Dam and other infrastructure.

“But again, we’re really keeping a close eye on that,” she said. “The situation can change very quickly.”

A water expert says heavy rainfall forecast for southern Alberta could cause damage in some areas, but it doesn’t appear as if a repeat of deadly flooding in 2013 is coming.

“We have a very high mountain snowpack for this time of year — one of the highest in decades — and that’s because of high winter snowfall and a very cool spring,” Pomeroy said in an interview from Canmore, Alta., on Monday. “Then we have a very high forecast of precipitation for the mountains and foothills.”

Environment Canada has issued rainfall warnings for between 75 millimeters and 150 millimeters of rain by Wednesday morning in parts of Alberta, including Banff, Calgary and Rocky Mountain House.

1:57
Feds move ahead with Springbank reservoir near Calgary

Feds move ahead with Springbank reservoir near Calgary – Jul 20, 2021

Alberta Environment has also issued a flood warning on the Bow River between Banff and Exshaw, and flood watches on the Bow, Elbow and Highwood rivers upstream of Calgary and High River. Both communities were hit hard during the flooding in 2013.

Calgary has issued a high stream flow advisory for the Elbow River and lowered water levels at upstream reservoirs on the Bow and Elbow rivers to make room for potential floodwater.

City of Calgary preparing for potential flooding this year

Pomeroy said people should keep a close eye on the forecast, but he noted that precipitation is currently expected to fall as snow rather than rain in the high mountains.

“So far, this appears to be a colder system than it was in 2013,” he said. “It would build up the snowpack instead of forming rapid runoff down to the creeks.

“But there’s always a lot of uncertainty with that — it depends on getting the air temperature within one or two degrees exactly right, so it could be wrong.”

Pomeroy said much would depend on what happened Monday night and Tuesday morning.

“From everything I can see, it doesn’t look like it will be a 2013-type event, though there’s still a possibility of damaging floods in localized areas,” he said.

Snodgrass also acknowledged how the conditions – high river flow, exenteded amounts of high rainfall and a greater-than-average mountain snowpack upstream – could bring back memories of 2013 for residents of the town that saw more than $5 billion in damage provincewide.

“If you or anybody that you know is experiencing PTSD, those kinds of emotions that come back, that were built in 2013, our FCSS department… they’re in the culture centre, so you can go over and talk to Shelly and her teams . They’ve got information, they’ve got kits available for you to help you, to help you deal with those kinds of things,” the High River mayor said.

–with files from Colette Derworiz, The Canadian Press