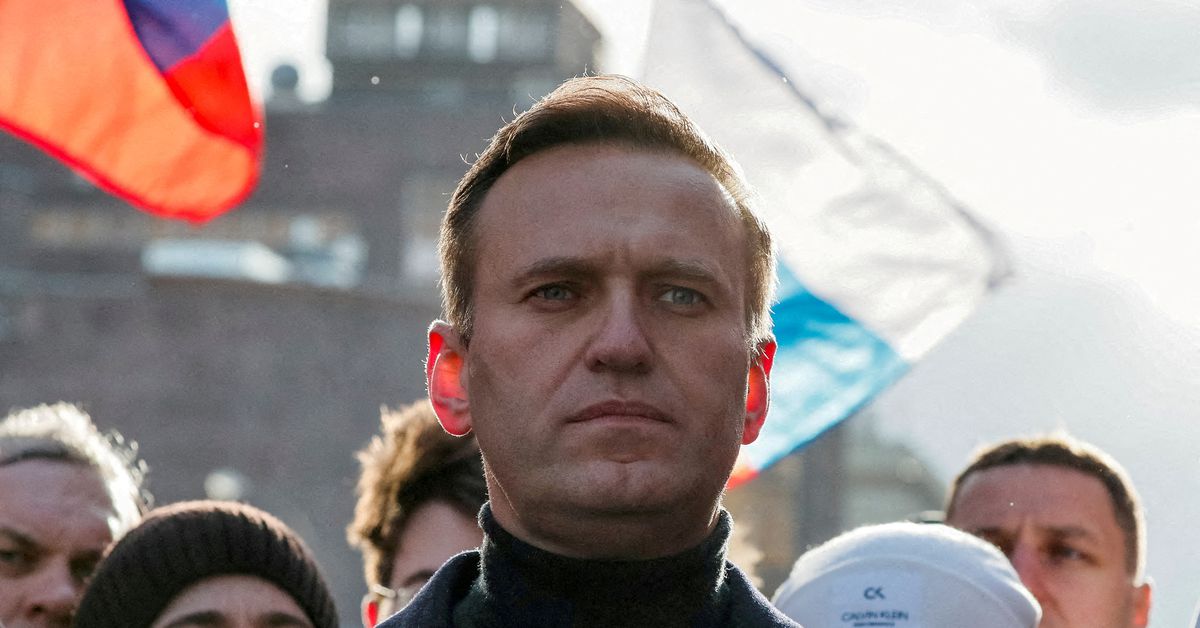 Kremlin critic Alexei Navalny takes part in a rally to mark the 5th anniversary of opposition politician Boris Nemtsov’s murder and to protest against proposed amendments to the country’s constitution, in Moscow, Russia February 29, 2020. REUTERS/Shamil Zhumatov

LONDON, June 9 (Reuters) – Jailed Russian opposition leader Alexei Navalny scolded Google (GOOGL.O) and Meta Platforms Inc (FB.O) on Thursday for shutting down advertising, a step he said had undermined the opposition and thus was a gift to President Vladimir Putin.

Navalny, by far Russia’s most prominent opposition leader, casts Putin’s Russia as a dystopian state run by thieves and criminals where wrong is cast as right and judges are in fact representatives of a doomed lawless country.

In a written address to the Copenhagen Democracy Summit, Navalny, who is currently in a Russian jail, said technology was being used by the state to arrest dissidents but that it also gave an opportunity to get to the truth.

“The Internet gives us the ability to circumvent censorship,” Navalny said in the address, a copy of which was posted on his official blog.

“Yet, at the same time, Google and Meta, by shutting down their advertising in Russia, have deprived the opposition of the opportunity to conduct anti-war campaigns, giving a grandiose gift to Putin.”

Neither Google nor Meta immediately responded to a request for comment on Navalny’s remarks. Both companies paused advertising targeting users in Russia in March, just days after Russia invaded Ukraine.

Navalny earned admiration from the disparate Russian opposition for voluntarily returning to Russia in 2021 from Germany, where he had undergone treatment for what Western laboratory tests showed was an attempt to poison him with a nerve agent in Siberia.

Navalny, a former lawyer who rose to prominence more than a decade ago by lampooning Putin’s elite and voicing allegations of corruption on a vast scale, said the titans of Silicon Valley had a lot of questions to answer.

They would have to decide, he said, whether or not they were really “neutral platforms” and whether or not users in democracies should operate under the same rules as those in repressive societies.

“How should the internet treat government directives, given that Norway and Uganda seem to have slightly different ideas about the role of the internet and democracy?” he asked.

“We love technology. We love social networks. We want to live in a free informational society. So let’s figure out how to keep the bad guys from using the information society to drive their nations and all of us into the dark ages.”