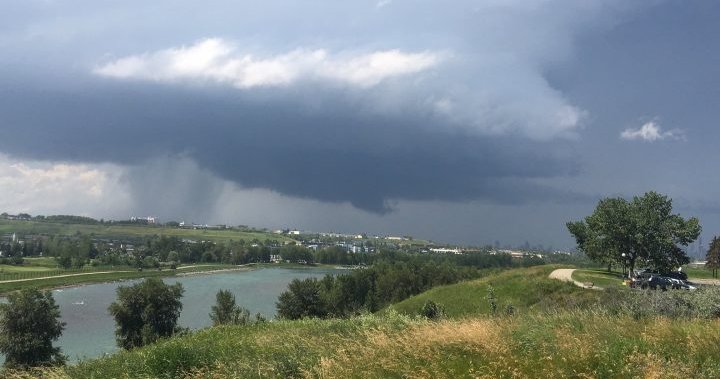 Move the car into the garage and the plants inside as a severe thunderstorm warning and several watches blanket much of Alberta Wednesday afternoon.

Storms were expected to develop along the foothills Wednesday afternoon before moving northeast, Environment Canada said. The risk of severe weather was expected to persist into the evening hours.

The national weather agency began issuing alerts around 11 am, saying conditions were favorable for the development of a severe storms capable of producing heavy rain, strong wind gusts and large hail.

“A weak low developing in west-central Alberta will cause instability along the foothills this afternoon,” said Tiffany Lizée, Global News Calgary chief meteorologist.

Want your weather on the go? Download the Global News Skytracker weather app.

“There is a chance isolated thunderstorms could develop and potentially become severe with the main concerns being strong 90 km/h hour gusts, nickel-size hail.”

Just before 2:30 pm, Environment Canada said meteorologists were tracking a severe thunderstorm west of Edmonton in Yellowhead County, near MacKay and Evansburg.

The severe storm was moving northeast at 20 km/h and capable of strong winds, up to toonie-size hail and heavy rain, the national weather agency said. That warning was downgraded back to a watch less than 30 minutes later.

Just after 3 pm, another severe storm was detected near the Brazeau Reservoir and Environment Canada said it was moving east at 40 km/h. It was also capable of strong winds and heavy rain, as well as up to nickel-size hail.

Severe thunderstorm watches are issued when atmospheric conditions are favorable for the development of thunderstorms that could produce one or more of the following: large hail, damaging winds or torrential rainfall.

“Although not (overly) likely to be severe, thunderstorms that develop (Wednesday) evening and move through Edmonton will have the chance at heavy rain, small hail, isolated wind gusts and lightning.”

Severe tstorm WATCH has been issued for parts of central + S #Alberta. There’s potential for severe storms to develop along the foothills this afternoon. The risk extends into this evening as well. Download our SkyTracker app to stay updated on alerts in your area. #YYC #ABstorm pic.twitter.com/IKwT9hIELN

Around 12:25 pm a severe thunderstorm warning was issued for Rocky Mountain House and Caroline. It was later dropped as the storm moved northeast.

As a reminder, large hail can damage property and cause injury, and strong wind gusts have the ability to toss loose objects, damage weak buildings, break branches off trees and overturn large vehicles.