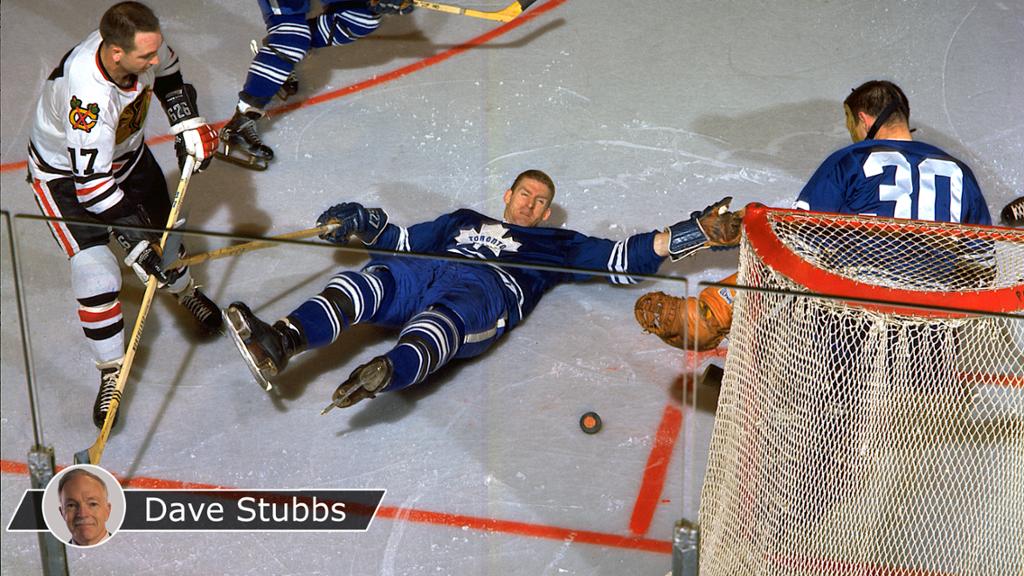 But here’s the best. Hillman should hold an NHL record forever, having won the Cup at age 18 years, two months and nine days old with the 1954-55 Detroit Red Wings, the youngest player to ever have his name engraved on the trophy. Today, a player must be 18 years old at the start of a season to be eligible to play his rookie NHL season.

Hillman, a six-time champion on three of the NHL’s so-called Original Six teams whose famous “Hillman Hex” on the Toronto Maple Leafs is or isn’t still alive, died late Friday at age 85.

Often called Morley (his middle name) by teammates, Hillman was a favorite of every goalie in front of whom he played, a rugged 6-foot, 185-pound shot-blocking, crease-clearing defender who was happy to never leave his own zone with NHL teams that also included the Minnesota North Stars, Philadelphia Flyers, Los Angeles Kings and Buffalo Sabers.

“Larry was a great teammate and a great friend,” said Dave Keon, the Maple Leafs icon who was Hillman’s teammate on all four Cup champions. “He would be our fifth defenseman but he worked really hard, he was always in shape, he always had a great outlook and he was encouraging all the time. And he was a pretty tough guy. He cleared the front of the net and got the puck out.”

“Larry was a good team man, he played a team game,” Mahovlich said. “He let you know he was ready, he was always prepared and that’s why a lot of teams like to have him around.

“But my greatest experience with Larry wasn’t in hockey,” the ‘Big M’added. “He was a great fastball pitcher, he had an underhand whip, like the famous Eddie Feigner of King and his Court. In 1957, we had a big (softball) tournament up in Kirkland Lake with a half-dozen of the best teams in the area. We played three games and I had an exceptional tournament. Can you believe I hit a home run in every game? I hit one against Larry, who was pitching for Kirkland Lake. I couldn’t believe it.

Hillman’s career was more colorful than a box of Crayolas. He played professionally for 15 teams in four leagues between 1955-76, skating in the NHL, WHA and the Western and American leagues. But that’s just a sliver of his remarkable road through hockey.

Hillman played parts of two seasons with Detroit following the 1955 Stanley Cup win, but ultimately was sent to Edmonton of the Western Hockey League. He was claimed by the Chicago Black Hawks in the June 1957 intra-league draft but was plucked off pre-season waivers four months later by the Boston Bruins.

A steady player in 1957-58 and 1958-59 for the Bruins, Hillman still found himself the following season with Providence of the American Hockey League, mired again in the minors.

The Maple Leafs rode to his rescue, in a sense, at the 1960 intra-league draft. Hillman would play parts of the next eight seasons with defense-deep Toronto, though with long stretches played with Rochester of the AHL. It wasn’t easy to crack a Toronto blue line that featured Tim Hortons, Bobby Baun, Carl Brewer and Allan Stanley.

“He spent part of a year with (coach) Eddie Shore in Springfield (in 1962-63) and I think it was beneficial to him in his passing the puck,” said Keon, whose maiden training camp with Toronto in 1960 was Hillman’s first season with the team. “Shore got him using a higher lie stick. Larry had a better vision of the ice. He thought going there was awful but in some little ways it helped his hockey.”

The 1961-62 Toronto Maple Leafs, winners of the first of three consecutive Stanley Cup championships. Larry Hillman is in the back row, second from left, between Dave Keon and Red Kelly.

Hillman famously locked horns with tight-fisted Maple Leafs general manager Punch Imlach in the summer of 1967 following Toronto’s upset Stanley Cup win against the Canadiens, haggling for a $5,000 raise that would bring him to $20,000 a year. Imlach set his bar at $19,500 and fined Hillman $100 a day during the latter’s three-week holdout.

The North Stars claimed Hillman in 1968, but unhappy that he was down $2,400, the defenseman said that until he was repaid, with interest, the Maple Leafs would never again win the Stanley Cup.

Team president Brendan Shanahan wrote an appreciative Hillman a check for the sum, with compound interest, during the Maple Leafs’ 2017 centennial year in a light-hearted bid to lift the “Hillman Hex.” Nevertheless, Toronto still hasn’t advanced to the Stanley Cup Final since 1967.

“It was terrible,” Keon remembered of the contract dispute. “Looking back on it, I think that really destroyed any morale that we had carried forward from the 1967 Cup, the haggling, because Larry was such an important part of our winning in ’67. I don’t know what Punch was thinking. “

From 1968-73, Hillman played for Minnesota, Montreal, Philadelphia, Los Angeles and Buffalo — his final NHL season under Sabers general manager Imlach, as it turned out — before he jumped to the WHA. He played two seasons for the Cleveland Crusaders and, finally in 1975-76, the Winnipeg Jets, for whom he won the league-championship Avco Cup.

The Stanley Cup-champion 1968-69 Montreal Canadiens, on which Larry Hillman won his sixth and final career championship. Hillman is in the back row, second from left, between Serge Savard and John Ferguson.

His playing career ended not with injury, but over a contract dispute.

“Cleveland was going under so Winnipeg was going to get stuck for the 60 if they kept me.”

Hillman refused a trade back to the Crusaders, knowing the team was on thin ice, so sat out a season as he took the Jets to court. He lost his case, filed an appeal, worked as assistant coach for the WHA’s Calgary Cowboys for the balance of the 1975-76 season, then won his appeal in 1976.

Not only were the Jets not bitter, they hired Hillman to be their coach. He guided the team to the 1977-78 Avco Cup with stars Bobby Hull, Anders Hedberg, Ulf Nilsson and Ted Green but was let go the following season with the arrival of John Ferguson as general manager, who brought in Tom McVie as coach.

Larry Hillman covers Chicago Black Hawks star Bobby Hull at Maple Leaf Gardens on Nov. 12, 1960, the puck in the corner behind them.

Hillman sold his stake in a tourist camp in Manitoba opened his own camp — Hillman’s Birchway Lodge on Long Lake — near Englehart, Ontario, about 350 miles north of Toronto, operating from late May through October’s moose hunt.

But not long after having set up shop, he was stricken with Guillain-Barre syndrome, a condition which can result in near total paralysis.

As he had battled throughout his entire hockey career, Hillman channeled all his energy into the fight, receiving two weeks of treatment in Toronto and undergoing two months of rehabilitation in Kirkland Lake, learning again how to walk. He viewed his recovery as simply another challenge successfully met.

Larry Hillman with his family at Maple Leaf Gardens on May 5, 1967, and about to set off on the Stanley Cup parade that day. Trophies on display with the Cup celebrate milestone goals for Frank Mahovlich, Mike Walton, Pete Stemkowski and George Armstrong, as well as the Trans-Canada Airlines Trophy for outstanding teamwork during the playoffs.

Hillman sold the lodge in 1996 after 15 years of operation and promptly threw his energies into work on Englehart’s Chamber of Commerce. He ran an annual hockey camp and organized a 30-mile train ride for a thousand kids with Santa Claus and entertainers, every child receiving gifts at the end.

His death was noted on Saturday by the Maple Leafs, who on their Twitter account wrote of “an active member of our alumni … a gentleman with a warm and generous smile.”

And a life very well lived in and beyond hockey.