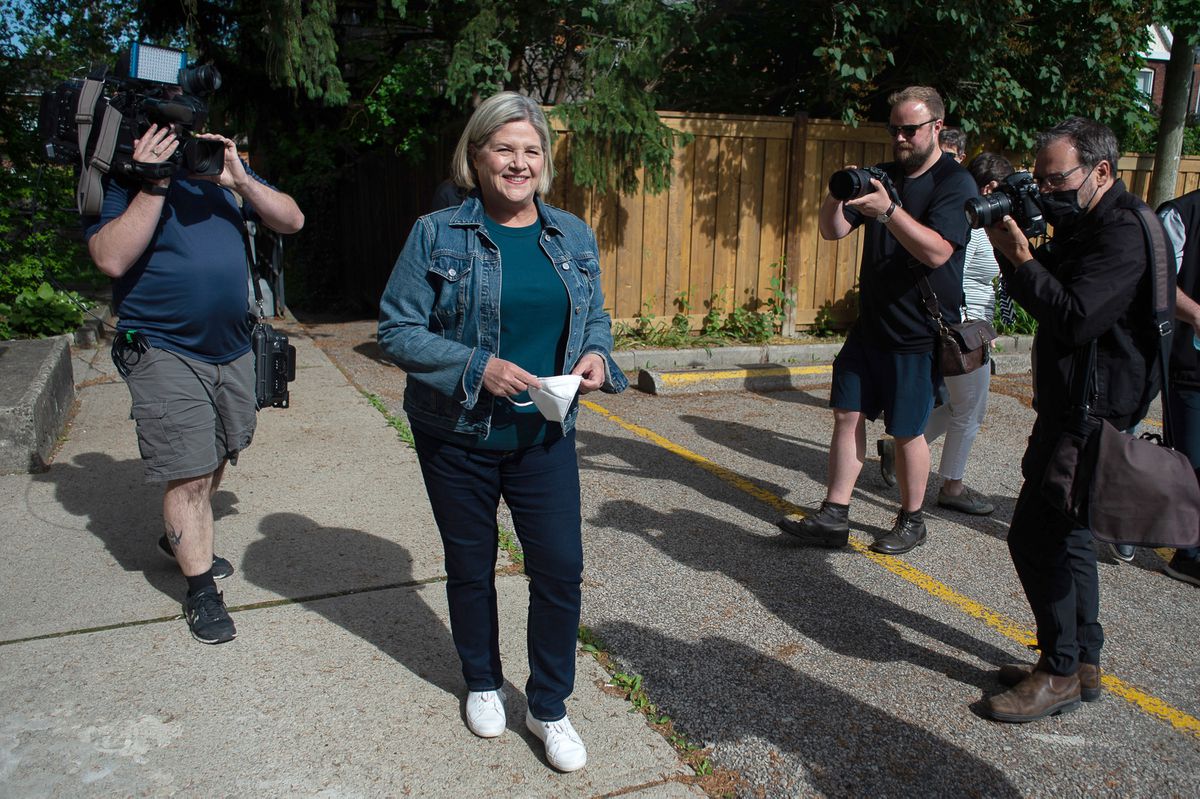 Andrea Horwath stepped down as head of the Ontario NDP, with the party set to lose a number of seats in the provincial election Thursday.

The left-leaning party retained its Official Opposition status in the Ontario Legislature, which it secured four years ago when the Liberals imploded in the previous election. But the New Democrats’ failure to expand their support on Thursday called Ms. Horwath’s leadership into question.

After a rousing, campaign-style speech to her supporters in Hamilton, Ms. Horwath teared up when talking about her own future.

“My commitment to you is never going to waver, and I’m going to keep working to earn your confidence,” she told a small crowd. “But tonight, it’s time for me to pass the torch … to pass the baton. To hand off the leadership of the NDP.”

At dissolution, the NDP had 39 seats. Incomplete results Thursday night suggested the party would win 31. Vote totals had yet to be released in a few ridings where polls had been kept open late.

Ms. Horwath, 59, represents a very safe NDP riding in Hamilton, and won her own seat easily on Thursday. A former city councilor, she has led the provincial New Democrats since March, 2009. This was her fourth election at the party’s helm.

As results emerged, she faced an open challenge from within her caucus. NDP MPP Joel Harden, who represents Ottawa Centre, told reporters he wanted to congratulate Ms. Horwath for her leadership, but that it was time for a change at the top.

The outgoing leader did not specify her next role. Some in the room for her speech on election night speculated she would be encouraged to run for mayor of Hamilton.

Victoria Shymlosky, a retired public school teacher in Hamilton, cheered with the crowd as TV reports declared the NDP the Official Opposition just before 9:30 pm There were boos when the same reports predicted a majority win for Doug Ford’s Progressive Conservatives.

The New Democrats had sought to present an economically populist pitch against a backdrop of fast-rising inflation, years of increases in housing prices and the aftermath of a pandemic that hit seniors particularly hard. The party vowed to cap the price of gas and bring back rent control. It also promised to facilitate the construction of 1.5 million new homes, hire health care workers and move away from for-profit long-term care.

Last week, the party was touting what it said was an increased total amount of donations compared with 2019, from a greater number of donors.

Dimitry Anastakis, a professor of business history at the University of Toronto, said the NDP message struggled to connect with voters because the broader economic picture is at odds with day-to-day financial concerns Ontarians may have about gasoline prices or food costs.

David Christopherson, a long-time NDP MP for Hamilton, was out canvassing for the party on Thursday. He said voters seemed tired during this election.

“They’re life tired. It was hard for people to focus on the campaigns, given that there wasn’t any one particular issue,” he said.

Ms. Horwath had to suspend in-person events in the run-up to election day after testing positive for COVID-19, but otherwise led a smooth campaign. There were controversies about individual candidates, but there were no major gaffes.

In a bitter fight for the progressive vote during this election campaign, which saw the NDP and Liberals often directing fire at each other instead of the governing Progressive Conservatives, neither party was projected to come close to forming government.

The PCs made inroads in the New Democrats’ labor support in this election campaign by winning the endorsements of a few unions – a development that could complicate matters for an NDP that must now rebuild and think about its future.

An Ekos poll earlier this week showed that the PCs had almost as much support among union members (35 per cent) as among the general public (37 per cent). The poll consulted 1,430 people from May 30 through June 1 and had a margin of error of plus or minus 2.6 per cent, 19 times out of 20.

Want to hear more about the Ontario election from our journalists? Subscribe to Vote of Confidencea twice-weekly newsletter dedicated to the key issues in this campaign, landing in your inbox starting May 17 until election day on June 2.