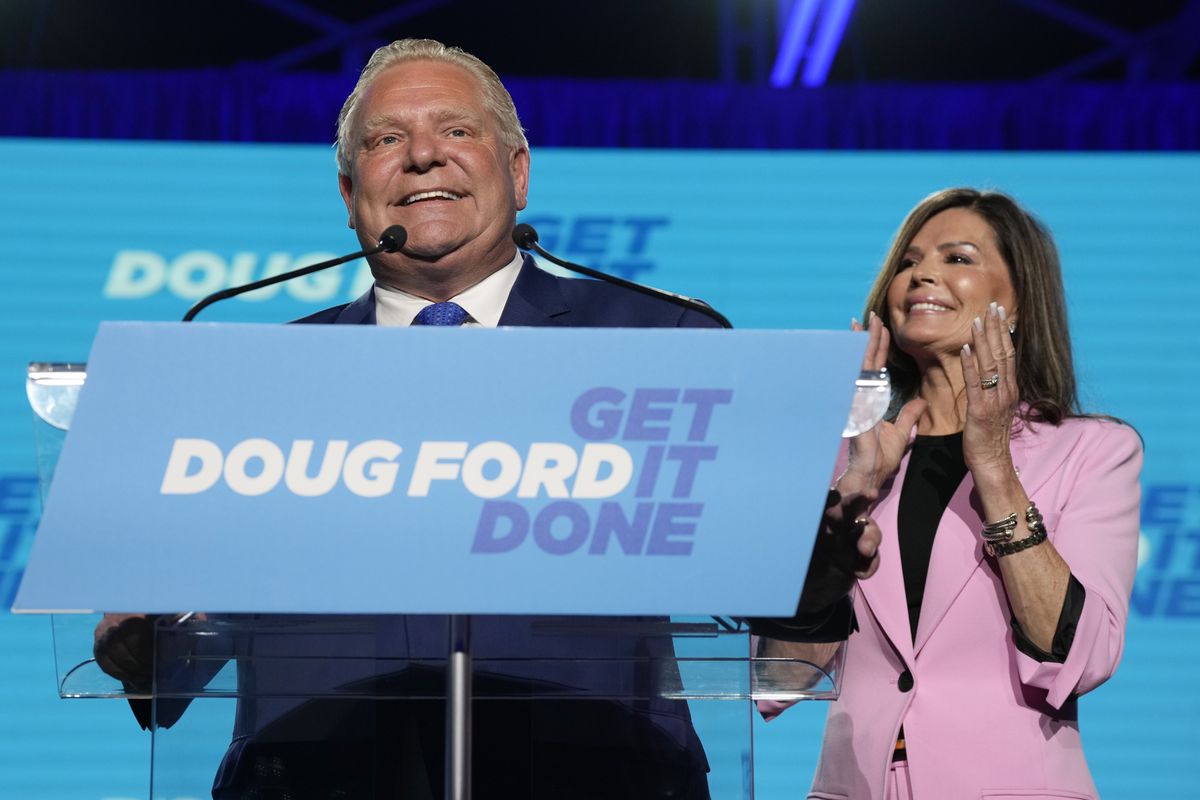 Premier Doug Ford has easily won a second majority government after a roller-coaster term dominated by the COVID-19 pandemic, with both NDP and Liberal leaders resigning in the face of failures by their parties to mount serious challenges to the Progressive Conservative juggernaut.

His party was leading or elected in 83 seats, a gain of seven seats from its results in 2018, with 41 per cent of the popular vote.

A jubilant Mr. Ford addressed supporters in the west-end Toronto suburb of Etobicoke, saying he had made his party more inclusive and calling for unity.

“Whether you work on the assembly line and voted NDP your entire life, or cast your last ballot for the federal Liberals, I want you to know that as long as I’m here, there’s room for you in this party,” Mr. Ford said.

Robyn Urback: Ontario Liberals get an abysmal result after a directionless campaign

It was a devastating night for the Liberal Party, which had won or was leading in just eight seats, one up from the seven it won in its near wipeout in 2018. Liberal Leader Steven Del Duca, who said on the campaign’s last day that no matter the election result, he would stay on as leader, told supporters Thursday night that he was giving up his rebuilding effort and relinquishing the leadership he had just won two years ago.

Mr. Del Duca also lost his own attempt at a seat in his home riding of Vaughan—Woodbridge, north of Toronto, where he was easily defeated by the PCs’ Michael Tibollo. The Liberals needed 12 seats to regain official party status in the legislature.

“This isn’t the outcome that we hoped for, and worked hard for,” said Mr. Del Duca, who had vowed to make Mr. Ford a one-term premier when he took on his embattled party’s leadership.

Speaking to supporters in her home base of Hamilton, a tearful NDP Leader Andrea Horwath said she was stepping down. Her party saw its 2018 seat count of 40 reduced to 31, according to early returns. She had said this week that she would make a decision about her future once voters had weighed in. Many in her party expected her to face a challenge if she tried to hang on, after losing her fourth election since taking the NDP’s reins in 2009.

“It’s time for me to pass the torch,” said Ms. Horwath, who spent four years as Official Opposition Leader.

She won her Hamilton Center seat, but her party took a beating elsewhere, including in Brampton, a battleground suburb northwest of Toronto. In the Windsor area, the PCs snatched the riding of Essex from the NDP, where long-time MPP Taras Natyshak declined to run again.

Before her announcement, there was already a call for her to go on Thursday night from the NDP’s Joel Harden, who won re-election in Ottawa Centre. He told local media that it was time for “new leadership.”

As of 10 pm four ridings were not yet reporting any results. Voting was extended at polling stations in 19 ridings, which delayed when the ballot counting could begin.

Voter turnout in the election could mark a new low in Ontario’s voting history. According to early results from Elections Ontario, only 40.7 per cent of voters cast a ballot. Prior to this campaign, the lowest turnover result was 48 per cent in 2011.

Political strategists have said throughout the campaign that the electorate seemed disengaged, weary after the two-year pandemic.

Pollster Shachi Kurl, president of the Angus Reid Institute, said her data has suggested Ontario voters were unimpressed by all three main party leaders – but the opposition was unable to make a compelling case against Mr. Ford.

“It has been the battle of the bleh,” she said. “It has been an uninspiring, disengaged campaign from the perspective of the Ontario electorate. They looked at the choices they had, and they went ‘bleh.’ “

The PCs were leading or elected in almost every riding in the critical swath of seats that circle Toronto – a region that often decides who forms a government in Ontario.

And in the Liberals’ historic Toronto stronghold, the NDP held on to many of the traditionally red seats that they flipped in the 2018 campaign. Early in the evening, the New Democrats were leading or elected in much of the central city, including Toronto—St. Paul’s, although the Liberals were set to win NDP-held Beaches—East York.

Green Leader Mike Schreiner, who won the party’s first seat in 2018, held onto his riding Guelph.

The PCs ran a tightly scripted, cautious “front-runner” campaign, announcing few new promises beyond plans, outlined in their budget, to spend billions expanding hospitals and building highways, including Highway 413, which would arc west of Toronto through protected Greenbelt lands .

Amid widespread anxiety over high inflation, Mr. Ford also repeatedly mentioned his moves in government to cancel licence-plate sticker fees and temporarily cut gas taxes by 5.7 cents. He avoided media questions as the campaign drew to a close, having also skipped a press conference after the first leaders’ debate. Many PC candidates opted not to show up to local all-candidates debates.

Both the NDP and the PCs ran attack ads aimed at Mr. Del Duca long before the formal campaign began, trying to remind voters that he was in cabinet in the government of unpopular premier Kathleen Wynne that they tossed out in 2018.

While health care was a major theme for all of the parties, relitigating the Mr. Ford’s management of COVID-19 over the past two years took a backseat in the campaign.

In his first year in office, Mr. Ford suffered from a series of scandals and missteps and was booed by the crowd celebrating the Toronto Raptors basketball title in 2019.

His was seen as a polarizing figure after his time as a Toronto city councilor during the tumultuous term his late brother, Rob Ford, spent as the city’s mayor, from 2010-2014.

Mr. Ford’s public approval ratings improved during the early stages of pandemic, when he was on television almost every day and some Ontarians warmed to his rants about price gouging or anti-mask “yahoos.”

But the tide turned again in April, when he sparked a public outcry with Ontario’s response to a third wave of COVID-19 – a wave epidemiologists blamed on his hasty reopening. Medical experts called his orders to ban playgrounds and hand police extra powers baffling. The measures were partly reversed and Mr. Ford offered an emotional apology.

But Mr. Tarrant also said Mr. Ford’s change in fortunes can be traced back further, to the appointment of Monte McNaughton to the labor portfolio in 2019 with a mandate to appeal to trade unions. The government made a series of changes aimed at workers, including reversing its opposition to boosting the minimum wage. A list of private-sector construction unions lined up to endorse the PCs.

As a result, Mr. Tarrant said, the PC Party under Mr. Ford is appealing to a wider range of voters, even though some “diehard” free-market Conservatives, he said, may not like the direction the party has taken.

Want to hear more about the Ontario election from our journalists? Subscribe to Vote of Confidencea twice-weekly newsletter dedicated to the key issues in this campaign, landing in your inbox starting May 17 until election day on June 2.