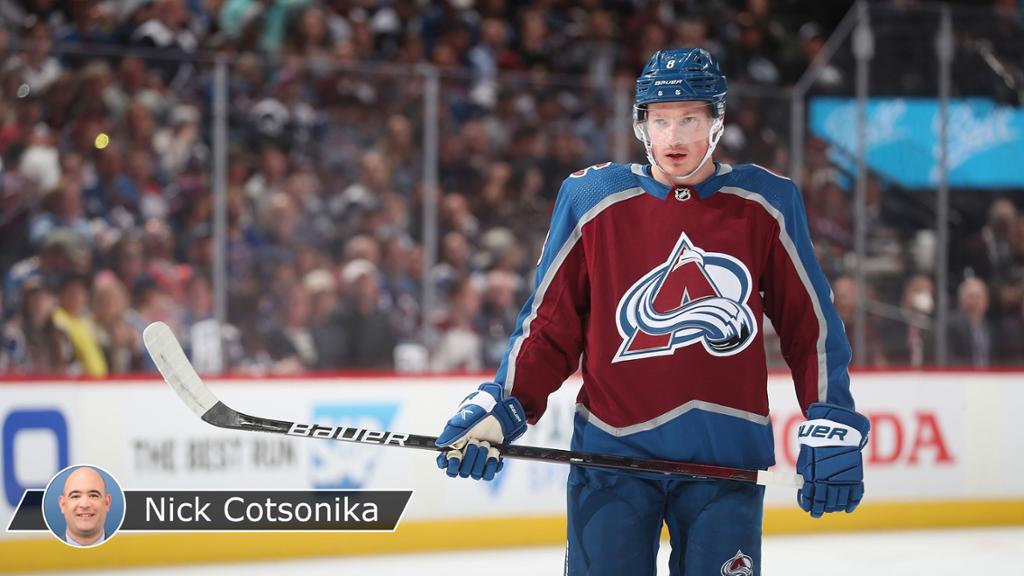 DENVER– Hold Makar stood out amid the chaos of the Colorado Avalanche’s 8-6 win against the Edmonton Oilers in Game 1 of the Western Conference Final on Tuesday, in yet another episode of his historic rise.

The 23-year-old defenseman had three points (one goal, two assists), giving him four three-point games in the Stanley Cup Playoffs this season and six in the playoffs in his NHL career. Only two other defensemen in NHL history have had that many before their 24th birthday: Paul Coffey (10) and Ray Bourque (six).

Makar leads the Avalanche with 16 points (four goals, 12 assists) in 11 games in the playoffs this season. He has 47 points (11 goals, 36 points) in 46 games in the playoffs in his NHL career. That’s 1.02 points per game. Among defensemen who have played 46 playoff games in NHL history, Makar is tied with Brian Leetch for second to Bobby Orr (1.24).

But that’s not all.

Makar matched up against Oilers center Connor McDavid in Game 1, playing 19:01 against him, more than any other Colorado skater. McDavid also had three points (one goal, two assists), giving him 29 points (eight goals, 21 assists) in the playoffs this season, most in the NHL. But when he was on the ice against Makar and partner Devon Toews at even strength, the Avalanche led in shots 14-4, slot shots 7-2, rush chances 4-0 and goals 3-1, according to Sportlogiq.

“I appreciate his professionalism, his maturity, how humble he is for an elite player, how committed he is,” Avalanche coach Jared Bednar said of Makar on Wednesday. “Those are the things that stand out to me.

“Like, you’ve all seen all the production on the ice, but just a quiet competitor, great teammate, real humble guy. Love his character. Love his personality. Those things that the normal fan doesn’t see. They will eventually . I’m sure he’s going to start getting more airtime as his career moves on.”

Makar, the No. 4 pick of the 2017 NHL Draft, has performed in the playoffs since the moment he arrived the NHL. He scored on his first shot in his NHL debut, a 6-2 win against his hometown team, the Calgary Flames, in Game 3 of the Western Conference First Round on April 15, 2019, two days after playing for the University of Massachusetts Amherst in the NCAA Division I final and three days after winning the Hobey Baker Award as the top player in NCAA men’s hockey.

“Yeah, I knew I was in trouble right when I got on the ice with him the first time,” Oilers defenseman Tyson Barrie said before Game 1. Barrie was a member of the Avalanche then and was traded to the Toronto Maple Leafs on July 1, 2019. “I was like, ‘I might be out of here.’ He was exceptional. You just see the way he skated, the way he moved the puck early.”

He has gained experience and confidence over time, allowing him to use his elite skating, skill and smarts to make more plays.

“I think he’s more comfortable,” Bednar said earlier this season. “Now he’s been in the League a couple years. He understands who he’s playing against, who he should be careful trying stuff against, who he might be able to try and expose.”

In the first period of Game 1, Makar assisted on a Nathan MacKinnon goal that gave the Avalanche a 2-1 lead at 15:10, then scored to give them a 3-2 lead at 19:46. oilers defenseman Darnell Nurse chipped the puck up the left-wing boards in the Edmonton end. The puck hit Oilers forward Evander Kane in the neutral zone. Makar grabbed it, carried it across the blue line (onside by inches with teammate Valery Nichushkin tagging up), and fired a wrist shot past Nurse and goalie mike smith.

The Avalanche took a 6-3 lead at 6:20 of the second period, when Makar fired a one-timer from the point that deflected off forward J.T. Compher in front of the net and past Smith.

“Not surprised to see how dominant he’s been, and it’s super impressive to see what he’s doing,” Barrie said. “We’re going to have a heck of a time trying to slow him down.”