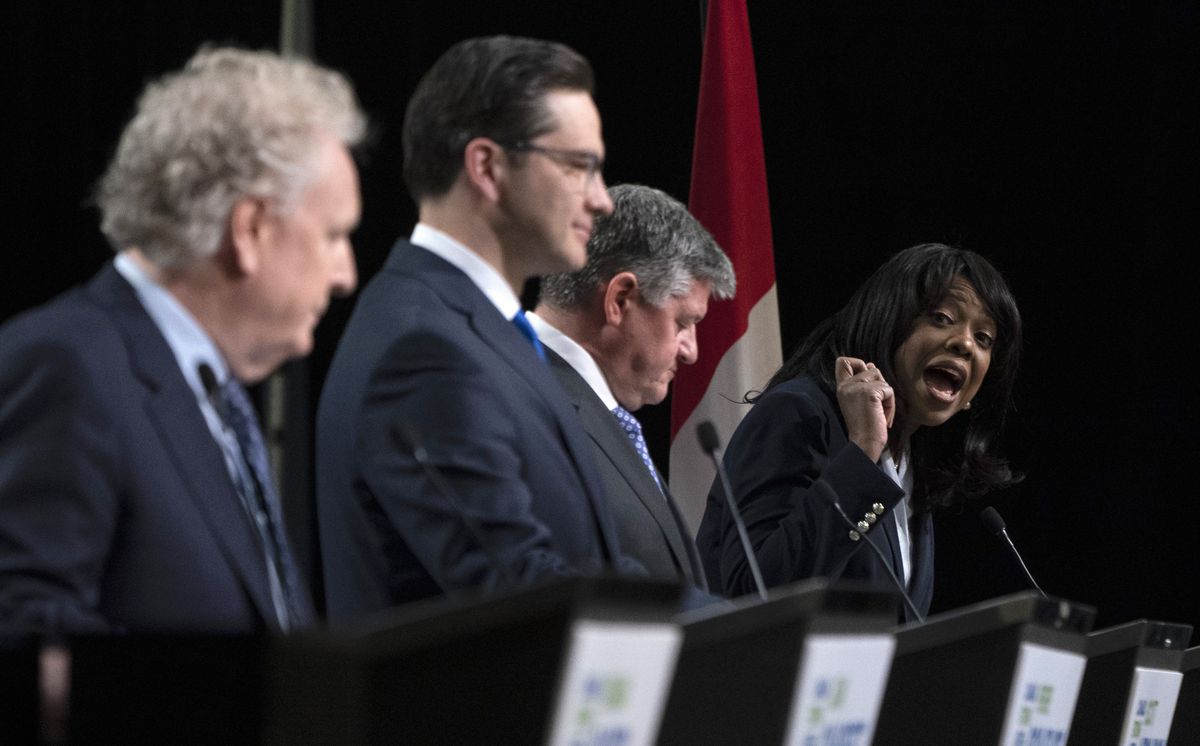 The early days of the Conservative leadership campaign have featured top-tier candidates declaring each other unfit to lead, exclusionary and untruthful, so you had to wonder what would happen when they were asked to debate face-to-face. Insults? Badgering? Charges?

Yes, yes and yes. Two things rank out through the 90-minute debate: posturing about truckers’ convoys and nasty exchanges.

One might have expected the vitriol would center on Ottawa MP Pierre Poilievre accusing Jean Charest of being a Liberal, and the former Quebec premier criticizing Mr. Poilievre’s support of the trucker convoy as disregarding the rule of law – there was plenty of that. But there was so much more.

Mr. Poilievre said Mr. Charest ran a scandal-plagued Quebec government in a party that took illegal donations. Mr. Charest accused Mr. Poilievre of saying one thing about Quebec’s Bill 21 in French and another in English. At one point, Mr. Charest told him to stop lying.

But it wasn’t just those two. Leslyn Lewis, the Haldimand-Norfolk MP seen as the banner-carrier of the party’s social conservatives, lit into Mr. Poilievre for being a trucker-convoy poser, a supporter of the cause when it was safe and convenient. Brampton Mayor Patrick Brown didn’t even show up – his campaign explaining that selling memberships matters more – but Mr. Poilievre still called him a liar.

And when Dr. Lewis had heard fellow candidate Scott Aitchison say something about conspiracy theories, she seemed to think it was aimed at her and fired a shot at him.

Mr. Aitchison, in fact, played the role of even-tempered Cassandra throughout the event, telling the audience and his fellow leadership candidates that all the screaming and shouting was going to turn off Canadians. He called, over and over, for respectful debate – arguing that Liberal Prime Minister Justin Trudeau had divided Canadians over vaccine status and that Conservatives should not fall into the same trap.

Nobody paid much heed.

There were traditional red-meat Conservative issues to talk about, from pipelines to defunding the CBC, at the debate organized during a conference of a conservative organization, the Canada Strong and Free Network.

But in this first leadership-campaign debate, candidates seemed to position themselves notably around a newer question: Where were you during the truckers’ convoy?

Most were eager to say they were totally onboard, with the exception of Mr. Charest.

“Mr. Charest learned about the trucker convoy on CBC, like other Liberals,” Mr. Poilievre said.

But apart from the former Quebec premier, it wasn’t a debate about supporting the convoy or not. It was about who supported it first and fully.

And Mr. Poilievre, who has worked to be the darling of the convoy crowd, saw his credentials challenged.

He was flanked by Dr. Lewis and Roman Baber, the Ontario MPP who was kicked out of Doug Ford’s Ontario Tory caucus 15 months ago for criticizing the province’s pandemic restrictions – and what really irked Mr. Poilievre was when other candidates suggested he hadn’t done enough to oppose lockdowns and support the convoy.

Mr. Baber remarked that Conservatives failed to stand up against lockdowns – and Mr. Poilievre insisted he “stood up for freedom from the very beginning.”

“That is not true,” Ms. Lewis chimed in. “You did not speak up until it was convenient for you to speak up. You did not even go to the trucker protest. You actually went and you took a picture in your neighborhood at a local stop.”

That left Mr. Poilievre stammering to insist he was at the protest, jousting with Ms. Lewis over his anti-lockdown bona fides.

“Only when it was popular,” Ms. Lewis shouted.

There were a lot of clashes. There was drama. But the candidates’ key messages didn’t really land. Mr. Charest’s argument that he can win elections in places Tories have not lately, and Mr. Poilievre’s message that he can improve purchasing power and personal freedoms – both were a little lost in the muck.

“I think what is dismaying is you see an awful lot of division even in this race,” he said late in the debate. “If we put on a show that is divisive and nasty with each other, I just don’t see how that unites all Conservatives. I don’t see how it shows to Canadians that we can govern, we can lead.”

But that wasn’t the mood on the stage.