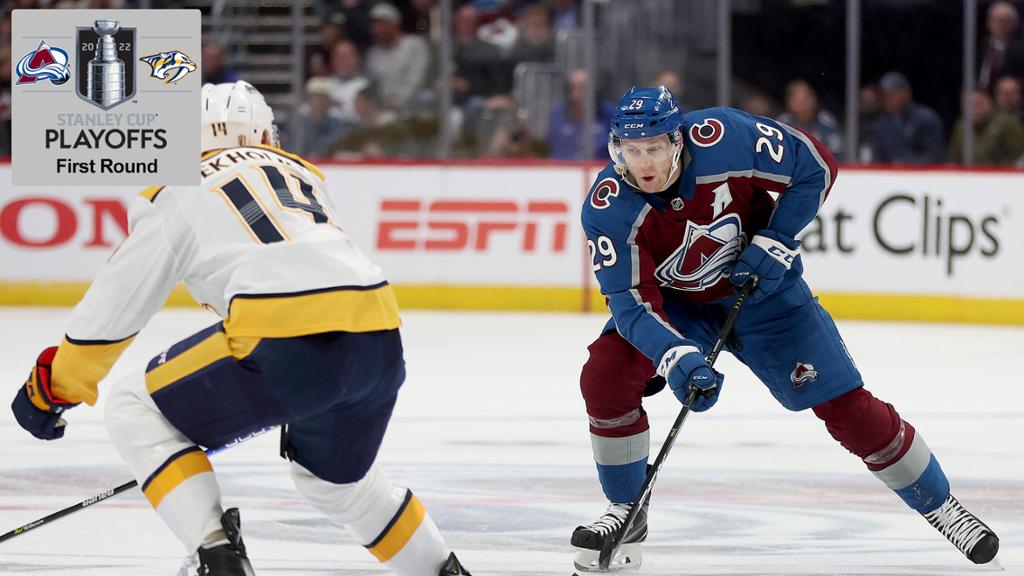 Connor Ingram will make his first start in the Stanley Cup Playoffs, and the Nashville Predators will try to rebound against the Colorado Avalanche in Game 2 of the Western Conference First Round at Ball Arena on Thursday.

Ingram allowed two goals on 32 shots in relief of david rittich in a 7-2 loss in Game 1 on Tuesday, after Rittich allowed five goals on 13 shots in 15:04. Each goal Ingram allowed went in off a teammate.

“He looked calm in there, so we’ll give him an opportunity to play,” Predators coach John Hynes said.

Ingram made his first three NHL starts this season, going 1-2-0 with a 3.71 goals-against average and .879 save percentage.

Juuse Saros, the Predators’ No. 1 goalie, is out with a lower-body injury. He is skating without pads and could return for Game 3 in Nashville on Saturday.

“There’s a possibility,” Hynes said. “That’s still a work in progress. I wouldn’t rule it out at this point.”

Hynes said Jeremy Lauzon will replace Matt Benning on defense, and the Predators still have to make a decision about a lineup change up front.

Forward Andrew Cogliano will not play but Avalanche coach Jared Bednar declined to say who will replace him. Cogliano left with an upper-body injury in the second period of Game 1 but participated in the morning skate Thursday.

The Predators want a better start after falling behind 5-0 early in Game 1.

“Certainly, it stings a little bit,” Predators defenseman Mark Borowiecki said. “It is a bit of a shock to the ego, I think, as a group and as individuals. But you can go one of two directions based on that. It’s either drag your lip and feel sorry and pout about it or say, ‘ Hey, let’s put a bit of a chip on our shoulder.'”

The Avalanche want to put the Predators on their heels again.

“They’re going to come ready to play right from the drop of the puck,” Bednar said. “I’m sure they’ll be talking about weathering the storm at the start of the game. I’d like to come out and have the exact same start.”

The Predators want to be physical and can accept penalties from aggressiveness in the flow of the game, but must avoid penalties from plays like high sticks after the whistle and horse collars in front of the net.

“Those are correct mistakes,” Hynes said.

If the Predators lose their discipline, the Avalanche must keep theirs and cash in on the power play. They scored two power-play goals on five opportunities in Game 1, including one on a 5-on-3.

“We don’t need to get involved in all the scrums after the whistle,” Bednar said. “I mean, you have to stick up for yourself to a certain extent, but our guys have been instructed [that] if we have the option to just skate away, then that’s what we’re going to do. This isn’t about ego. It’s about winning.”

The Avalanche’s offensive onslaught starts in their own end.

Lauzon (lower-body injury) will play for the first time since April 16. … O’Connor could replace Cogliano; he has one assist in seven NHL playoff games