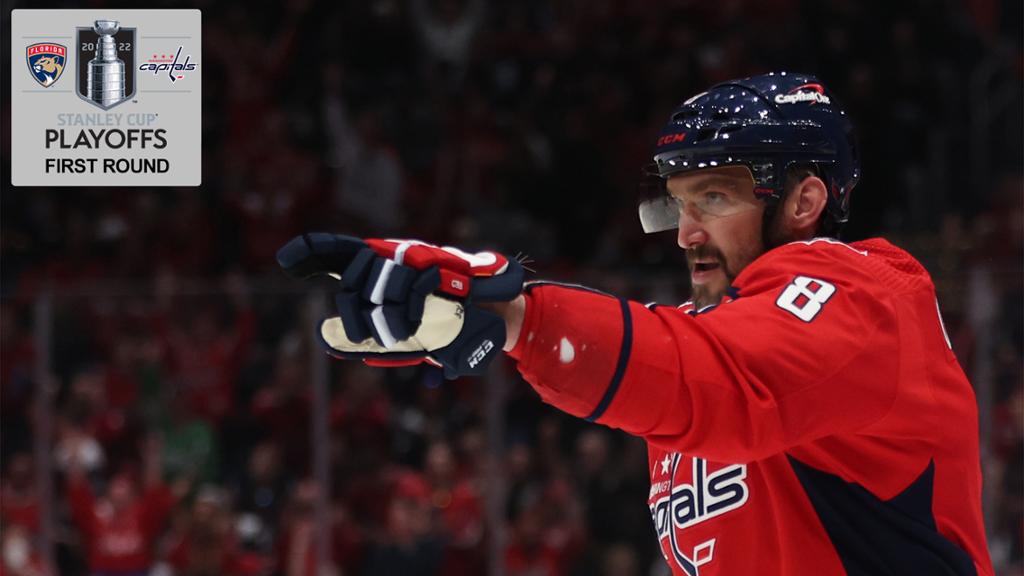 WASHINGTON — Alex Ovechkin will play for the Washington Capitals in Game 1 of the Eastern Conference First Round against the Florida Panthers at FLA Live Arena on Tuesday (7:30 pm ET; ESPN2, SN360, TVAS2, BSFL, NBCSWA).

Ovechkin smiled and said “we’ll see” when asked if he will play Tuesday, but the forward will return from the upper-body injury that caused him to miss the Capitals’ final three regular-season games. Ovechkin was a full participant at practice Sunday, skating at left wing on the top line and in his usual spot in the left circle on the first power-play unit and appearing not to hold back while working on his one-timer at the end of practice.

Ovechkin said he felt “good” in practice and that he would have played in the Capitals’ final three regular-season game had it been the Stanley Cup Playoffs. During his 17 NHL seasons, Ovechkin has sat out 27 regular-season games because of injury and has never missed a playoff game.

“Obviously, we knew we made the playoffs and just decided to take a rest,” Ovechkin said.

Ovechkin was injured when he tripped over the stick of goalie Erik Kallgren and crashed left shoulder first into the end boards after failing to score on a breakaway during the third period of Washington’s 4-3 shootout loss to the Toronto Maple Leafs on April 24. Ovechkin participated in the morning skate prior to facing the New York Islanders on Thursday and skated again before their regular-season finale against the New York Rangers on Friday but did not play in either game.

Washington returned to practice Sunday after taking Saturday off, and Ovechkin looked eager to get the playoff started.

“Looks great,” Capitals center Nicklas Backstrom said after feeding Ovechkin for one-timers at the end of practice. “He looked like himself, I think, out there.”

The Capitals will need Ovechkin at his best against high-scoring Panthers, who led the NHL in averaging 4.11 goals per game. The Capitals lost all three games he missed, getting outscored 12-4.

Ovechkin was fourth in the NHL and led Washington with 50 goals in 77 regular-season games. It was the 36-year-old’s ninth 50-goal season tying the NHL record shared by Wayne Gretzky and Mike Bossy.

Ovechkin is third in NHL history with 780 goals after passing Marcel Dionne (731) for fifth against the Rangers on Oct. 13, Brett Hull (741) for fourth against the Columbus Blue Jackets on Nov. 12 and Jaromir Jagr (766) for third against the Islanders on March 15. He is 21 goals behind Gordie Howe in second with 801 goals and 114 behind Gretzky’s NHL record of 894.

“Obviously, he is the best goal scorer in the League and goals are important,” defenseman Dmitry Orlov said. “You can see last three games we didn’t score a lot. For sure we need him as a captain, as a leader, as our goal scorer, so we need everyone, everybody healthy right now so it is good.”

Vitek Vanecek will make his first Stanley Cup Playoff start for Washington in Game 1. He allowed one goal on four shots in 13:10 in relief of Craig Anderson in a 4-3 loss to the Boston Bruins in Game 1 of the first round last season.

“You’d like to see the goaltender just take off and run,” Laviolette said. “Like I said during the regular season, that was also the case. But we used both goaltenders, were able to win a lot of hockey games, have a successful season, somewhat successful with100 points utilizing both goalies.”