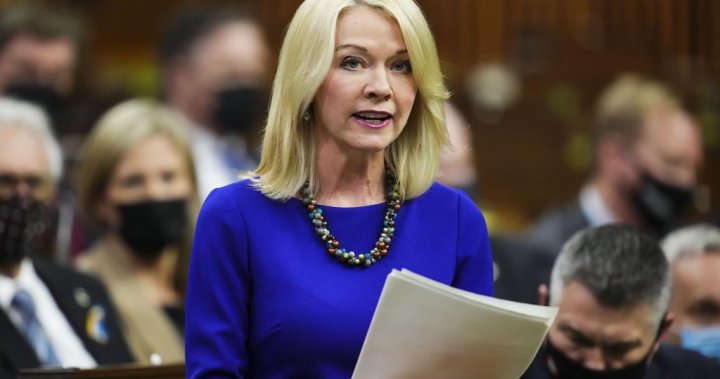 The Conservative Party is attempting to keep its MPs quiet on a leaked US Supreme Court decision regarding Roe v. Wade that would overturn abortion rights in that country.

In a memo to Conservative MPs, interim leader Candice Bergen’s office instructed MPs that the party would not comment on the leaked court decision that has sent shockwaves through the US

“Conservatives will not be commenting on draft rulings leaked from the Supreme Court of the United States. Thank you,” read the one-line memo, first reported by the Globe and Mail and confirmed by Global News.

5:04
Roe v. Wade – what are the possible ramifications if it’s overturned?

Roe v. Wade – what are the possible ramifications if it’s overturned?

The instruction comes as Conservative leadership hopefuls are scheduled to assemble in Ottawa for an annual conference of the movement’s faithful. The “Canada Strong and Free Network” – formally known as the Manning Center for Building Democracy – has a leadership candidate’s debate scheduled for Thursday night, in advance of a weekend of workshops and speeches.

It is likely that the leaked US Supreme Court draft decision will be a hot topic among the social conservative crowd that frequents the conference.

It is not unusual for Conservative Party HQ – or other federal parties – to issue directives on communications or suggested talking points to their MPs on contentious issues.

What is Roe v. Wade? The US Supreme Court decision, explained

But while the issue has been settled in most major federal parties, the right to an abortion is still an active debate in Canadian circles – particularly during leadership conservative contests, when the organized social conservatives hold significant power.

Patrick Brown, the mayor of Brampton and former Ontario PC leader, said in a statement he would “always support the right of a woman’s decision on her reproductive health. Full-stop.”

“A Conservative party led by me will not change Canada’s abortion laws. Period,” Brown said.

He also suggested that any Conservative support for restricting access to abortions would be used as a “sledgehammer” against the party by both the Liberals and the NDP. The Liberals, in particular, have often raised concerns about social conservativism and its influence on Conservative leaders.

In a statement Tuesday afternoon, Prime Minister Justin Trudeau said his party will “never back down” from “protecting and promoting women’s rights in Canada and around the world.”

Global News requested comment from Pierre Poilievre, the apparent frontrunner to lead the party into the next election, on his reaction to the leaked draft decision. A spokesperson for Poilievre did not immediately respond to the request.

Conservative MP and leadership candidate Leslyn Lewis – who was the social conservatives’ standard-bearer in the 2020 leadership contest, finishing third – said she has been explicit about her “pro-life” agenda.

“Dr. Lewis will not be commenting on the leaked US Supreme Court documents as it is not a final decision,” wrote Steve Outhouse, Lewis’ campaign manager.

He added that she has a “no hidden agenda” approach to “these sensitive but important topics,” including increasing funding for pregnancy centers and criminalizing “coerced” abortions.

In a statement, Bergen’s office said it would be “inappropriate” for the party to comment on matters before US courts.

“When it comes to the debate in Canada, Conservatives’ position remains what it has been since the Harper government. Access to abortion was not restricted under Prime Minister Stephen Harper, and the Conservative Party will not introduce legislation to reopen the debate,” Bergen’s office wrote.

“The only ones reopening this debate are the Liberals, and Justin Trudeau is once again using women’s reproductive rights to wedge and divide Canadians.”