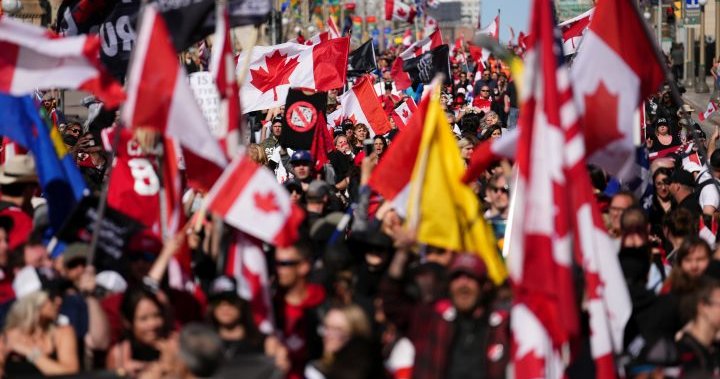 The “Rolling Thunder” rally is set to wind down today after arriving in Ottawa Friday afternoon, bringing large crowds to a downtown core where residents are still tense after the three-week-long occupation in February.

A spokeswoman for Freedom Fighters Canada, one of the groups organizing the weekend-long demonstration, says a church service scheduled for 10:30 am is the only event associated with the rally set to take place today.

Protest organizers say the rally was set up to oppose COVID-19 vaccine mandates.

Crowds took part in a ceremony at the War Memorial in the morning followed by a motorcycle drive-by and an afternoon demonstration on Parliament Hill.

UPDATE: Today, the Ottawa Police Service and its partners continued its enhanced operational posture in the downtown core to manage protests and events. (1/3)

The force said one woman was arrested for assaulting police on Elgin Street, where the motorcycle rally took place, and a man was arrested for breaching conditions stemming from February’s “Freedom Convoy” occupation, which gripped the city for about three weeks.

Another man is facing several charges after allegedly “rushing” an Ontario Provincial Police motorcycle, including dangerous driving, assault with a weapon and violating conditions stemming from February’s “Freedom Convoy” occupation, the Ottawa Police Service said in a news release.

An incident of “motivated mischief at a religious institution” is also under investigation, the force said in a Sunday-morning tweet, though police did not say if the incident was connected with the weekend-long rally.

Ottawa police have called in backup from RCMP, Ontario Provincial Police and a number of municipal forces. Since Friday, more than 560 tickets have been issued for a variety of offenses and dozens of vehicles have been towed, police said.

Steve Bell, interim chief of the Ottawa Police Service, has warned the protesters they will not be allowed to start a long-term occupation this time. But some citizens, including Centerville Community Association president Mary Huang, say the real test will be in seeing whether people actually leave the city on Sunday afternoon.

Enforcement action since 7 AM Friday in regard to the demonstrations in #OttCity: