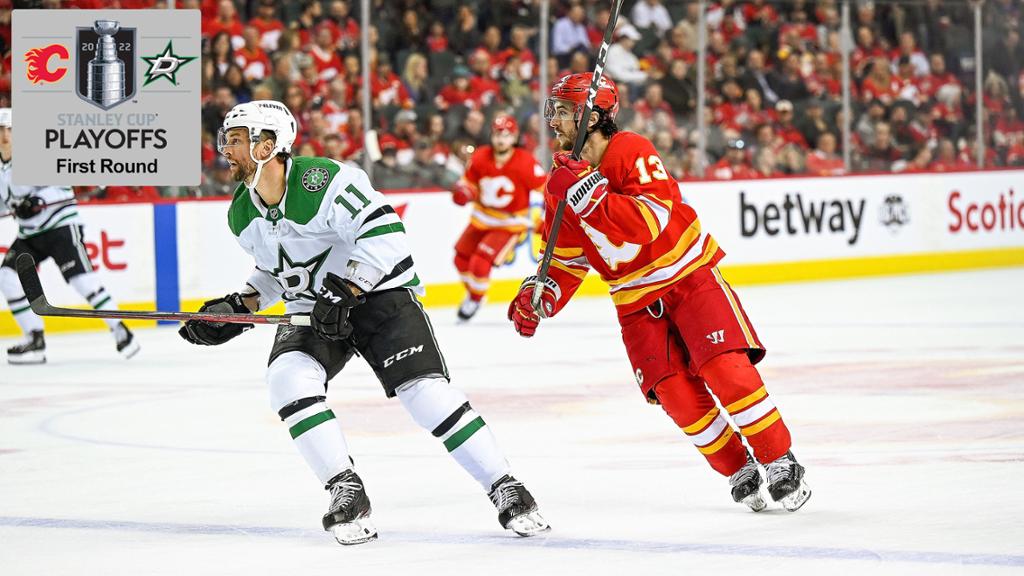 The Calgary Flames and Dallas Stars will meet in the Stanley Cup Playoffs for the third time when they play in the Western Conference First Round.

The Flames are back in the playoffs after failing to qualify last season. They have reached the second round once in the past seven seasons, when they were eliminated by the Anaheim Ducks in 2015. They won the Pacific Division in 2018-19 but lost to the Colorado Avalanche in the best-of-7 first round in five games.

“A lot of us were here when it really hurt a few years ago, and we want to show we’re better than that,” Calgary forward Mikael Backlund said. “A lot of guys have won it once or twice and they know what it’s like and want to win it again. I think just overall, [we’re a] more experienced group, and more experienced management as well. I feel like we have a really good shot here and we want to take advantage of it.”

The Stars missed the playoffs last season after advancing to the 2020 Stanley Cup Final. They secured the first wild card in the West on Friday with a 4-2 win against the Ducks, combined with the Nashville Predators’ 5-4 loss to the Arizona Coyotes.

Flames: Forward Johnny Gaudreau set NHL career-highs this season in goals (40), assists (75) and points (115), leading Calgary in each category. His point total ranks second in Flames history behind Kent Nilsson, who had 131 (49 goals, 82 assists) in 1980-81. Gaudreau, who is fifth in the NHL with 1.40 points per game, can become an unrestricted free agent this summer.

stars: Forward Joe Pavelsky led Dallas with an NHL career-high 81 points (27 goals, 54 assists). The 37-year-old continues to be one of the best at redirecting shots in the League and he, along with forwards Jason Robertson and Roope Hintzhave formed a productive top line.

Flames: Jacob Markstrom carried the bulk of the load in the regular season and is expected to do the same in the playoffs. He went 37-15-9 with a 2.22 goals-against average, .922 save percentage and a League-leading nine shutouts in 63 games (all starts). Dan Vladar was solid in the backup role, going 13-6-2 with a 2.75 GAA, .906 save percentage and two shutouts in 23 games (19 starts).

Flames: Calgary allowed 2.51 goals per game this season, best in the Western Conference and third in the NHL behind the Carolina Hurricanes (2.44) and New York Rangers (2.49).

stars: Dallas had 28 one-goal wins, the most in the NHL. The Boston Bruins and Minnesota Wild were next; each had 24.

Flames: Matthew Tkachuk is entering the playoffs after the best regular season of his career; he was second on the Flames with 104 points (42 goals, 62 assists). His previous NHL season-high was 77 points (34 goals, 43 assists) in 2018-19. Tkachuk provided grit and production on the left wing alongside Gaudreau and center Elias Lindholm to help form one of the League’s top lines.

stars: Robertson, a finalist last season for the Calder Trophy, voted as the NHL’s top rookie, has looked comfortable with Hintz and Pavelski. He was second on the Stars with 79 points (41 goals, 38 assists) and led them with 13 power-play goals.

“I think we have such a close group of guys, a lot of guys with experience, a lot of guys who have won, a mixture of young guys, older guys, we just like being around each other every day and working hard, competing for the guy next to you. It’s going to be fun.” — Flames defenseman Christopher Tanev

“It’s playoffs, everyone will be ready. We’re pro athletes and that’s what we play the whole season for. It’s tough to get into playoffs and it’s exciting to play in playoffs and it’s the best thing you can play in hockey, (the ) Stanley Cup Playoffs.” — Star forward Radek Faksa

Flames: Markstrom can be as strong in the playoffs as he was in the regular season. Containing Pavelski’s line will be especially key, but Calgary will also have to keep the shots-against manageable. The Flames allowed 29.0 shots per game during the regular season, fifth in the NHL.

stars: They get more offense from someone not named Pavelski, Robertson or Hintz. Those three have been outstanding, and it won’t be surprising if they continue to produce in the playoffs. But other lines have to step up to take the onus off the top group.