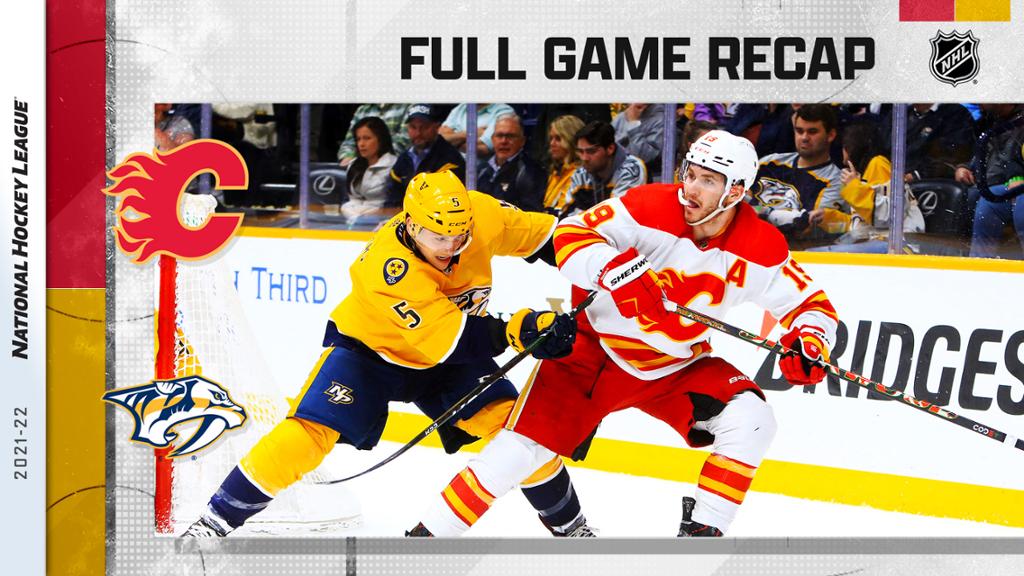 NASHVILLE — The Nashville Predators clinched a berth in the Stanley Cup Playoffs after losing to the Calgary Flames 5-4 in overtime at Bridgestone Arena on Tuesday.

The Predators’ eighth straight playoff berth became official when the Dallas Stars defeated the Vegas Golden Knights 3-2 in a shootout. Nashville (44-29-7) will be one of the two Western Conference wild cards.

The Predators could have clinched their berth with a regulation win but blew three leads, the third when Matthew Tkachuk scored with 0.1 seconds left in the third period.

“I think it’s a real tribute to our players,” Nashville coach John Hynes said. “We certainly deserve to be in the playoffs, the way that I think we played all year and the way the guys have battled. No one picked us to be here. We talked about writing our own story and having a strong team identity and a strong team culture, along with a lot of talent. [tails] off for 80 games to get here.”

Video: CGY@NSH: Tkachuk sneaks one in with 0.1 seconds left

Filip Forsberg scored two goals, Matt Duchene had a goal and two assists, and Juuse Saros made 30 saves for the Predators (44-29-7). Saros left the game at 13:28 of the third period with an undisclosed injury.

Hynes said Saros was still being evaluated, and that the team would likely update his status on Wednesday. Saros leads the NHL with 67 starts this season.

Tkachuk tied the game 4-4 in the final second, stuffing a shot under Rittich. The goal was confirmed after a review initiated by the NHL Situation Room.

“I couldn’t hear, so I didn’t know if it was actually in or not,” Tkachuk said. “When I came to the bench, they said it was in. It was just like, `What else can possibly happen in this game?’ It was good to get that one and then get it in [overtime].”

Dillon Dube scored two goals, Noah Hanifin had a goal and an assist, and Dan Vladar made 19 saves for Calgary, which has clinched the Pacific Division. It was the Flames’ first win against Nashville in three games this season. The teams could play each other in a first-round playoff series.

“Lots of emotion, lots of energy in the building,” Calgary coach Darryl Sutter said. “Fun game. Win or lose it was a fun game.

“That’s what playoffs are. Up one, down one. You have to play every shift like it’s the one that will be the difference. That’s the way it works.”

Dube gave the Flames a 1-0 lead at 4:02 of the first period, scoring with a wrist shot over Saros’ left shoulder. He has eight goals in his past eight games.

Josi tied it 1-1 at 5:41 of the second period, firing a slapshot from the high slot that beat Vladar.

Duchene made it 2-1 at 8:08, scoring into an empty net after Mikael Granlund‘s shot deflected to him. He and Forsberg each has 42 goals this season.

Dube tied it 2-2 at 13:14 of the second, with a shot that deflected off the stick of Nashville defenseman Mattias Ekholm.

“I’d have to say, I’ve played over 1,000 games now, and that’s probably a top-five game that I’ve been a part of with the goals, the hits, the fights, the emotion, crowd,” Calgary forward Milan Lucic said. “So it was a great game to be apart of.”

Forsberg gave the Predators a 3-2 lead 30 seconds into the third period, following a cross-ice pass from Duchene.

Hanifin tied it 3-3 at 2:03, sending a wrist shot from just inside the blue line that beat Saros on the glove side.

Forsberg made it 4-3 at 9:35 of the third, scoring his second power-play goal.

“We hadn’t beaten these guys this year, so if we do run into them, it’s nice to have the confidence that we can beat them,” Tkachuk said. “I thought all in all, that game did a lot for us.”