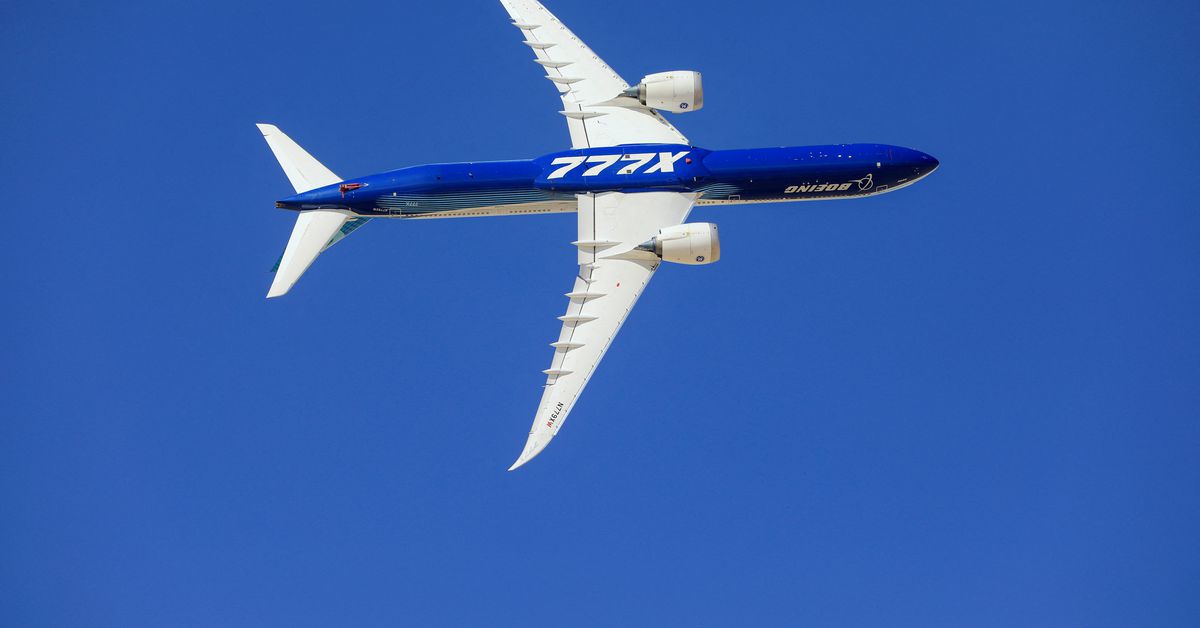 Shares of the US planemaker fell to a nearly 1-1/2 year low after it posted a quarterly loss and announced it was halting 777X production through 2023 due to a fresh delay in its entry into service after certification problems and weak demand.

“Another dreadful set of results,” Agency Partners analyst Nick Cunningham said in a client note, adding that a “general sense of disarray continues”.

On the plus side, Boeing said it submitted a certification plan to US air-safety regulators in a step toward resuming deliveries of its 787 Dreamliner, halted for nearly a year by inspections and repairs in a separate industrial headache costing about $5.5 billion. read more

The twin-aisled Dreamliner, along with its cash cow 737 MAX, are vital to Boeing’s ability to emerge from overlapping coronavirus and jet-safety crises, a path steepened by war in Ukraine.

Boeing did not specify when Boeing would resume Dreamliner deliveries. Reuters reported last week Boeing had advised key airlines and parts suppliers that the deliveries would resume in the second half of this year. read more

Boeing also confirmed a delay in handing over the first 777X jet to 2025, from the previous target of late 2023, but said it remained confident in the program. [nL2N2WK1VK]

“We’ve got to give ourselves the time and freedom to get this right,” Calhoun told analysts.

Calhoun said the halt in 777-9 production – which will add $1.5 billionin fresh costs – was based on a longer safety certification timeline, a risk reported by Reuters in February. read more

He said the production pause would help minimize inventory and the number of jets requiring retrofits, while it adds to freighter capacity with a newly launched cargo spinoff of the 777X, the world’s largest twin-engine passenger plane. read more

“We are concerned that this delay (in 777X delivery) may allow airlines to cancel without penalty,” Citi Research analyst Charles Armitage said.

Boeing is facing an increasingly high-stakes battle to win certification of the largest variant of the 737 MAX before a new safety standard on cockpit alerts takes effect at year-end.

The deadline for changes was introduced as part of broader regulatory reforms at the Federal Aviation Administration following fatal 737 MAX crashes in 2018 and 2019. read more

“The intent of that legislation was never to stop the derivative product line with respect to the MAX,” Calhoun said. “So I believe our chances are good with respect to getting legislative relief. It doesn’t mean we’ll get them. And if we don’t, it’s a problem.”

Boeing reiterated it expects its 737 MAX production rate to reach 31 planes per month in the second quarter, a slight delay from what some analysts expected, though industry sources have not ruled out a slip. It has 320 of the jets in inventory.

Boeing said it was on track to return to positive cash flow in 2022 with no need for an immediate capital raise as it ramps up deliveries of the cash-cow narrow-body, though it faces risks in the crucial China market even as travel rebounds from the pandemic.

“Traffic is returning, and it’s returning in a pretty big way,” Calhoun said.

Like other aerospace companies, Boeing is grappling with supply chain logjams, inflation and fallout from war in Ukraine.

“Inflation continues to take a hard run at everything we do,” Calhoun told analysts.

It booked a $660 million charge in the quarter on its VC-25B – commonly known as Air Force One – due to higher supplier costs and technical problems and schedule delays.

And it booked pre-tax charges of $212 million due to the war in Ukraine and international sanctions against Russia, which pose risks to materials supply and aircraft orders. read more

Asked whether Boeing would hit a 500-aircraft delivery target for the 737 MAX this year, Chief Financial Officer Brian West said, “we probably won’t get quite all the way there.”