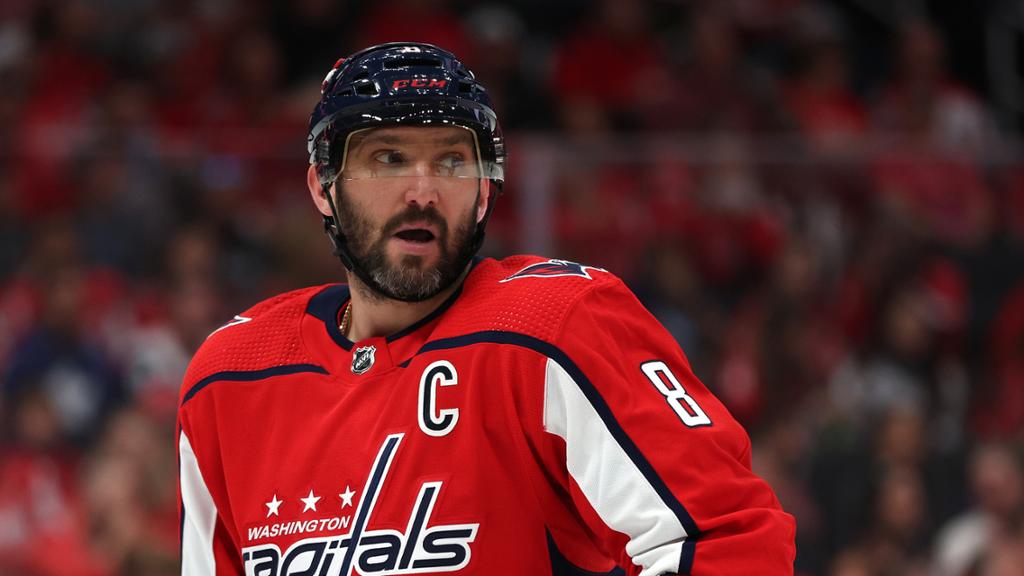 ARLINGTON, Va. — Alex Ovechkin‘s status for the start of the Stanley Cup Playoffs with the Washington Capitals next week is uncertain because of an upper-body injury.

Although Capitals coach Peter Laviolette said Ovechkin will be a game-time decision against New York Islanders at Capital One Arena on Tuesday (7 pm ET; NBCSWA, MSG+2, ESPN+, NHL LIVE), he wasn’t ready to commit to the 36-year-old left wing playing Game 1 of the playoffs, likely May 2 or May 3.

“I want to say, ‘I hope so,’ but again, I don’t know,” Laviolette said. “It depends on how things progress with him, so it’s day to day right now. It’s day to day, so when you go in and talk to the trainers again, he’s been in there all morning and he gets looked at and worked on and we’ll see.”

Ovechkin was injured during a 4-3 shootout loss to the Toronto Maple Leafs on Sunday. He tripped over the stick of Maple Leafs goalie Erik Kallgren and crashed left shoulder first into the end boards after failing to score on a breakaway 1:58 into the third period.

Washington didn’t practice Monday and Ovechkin didn’t participate in the morning skate Tuesday, but Laviolette didn’t rule him out to play against New York.

“Alex is day to day, and I think we’re going to evaluate it and do the best thing for Alex,” Laviolette said. “And so he’ll be a game-time decision, but there’ll be nothing that we jump into that we don’t need to or if it’s not right.”

The Capitals (44-23-12) have clinched a playoff berth and hold the second wild card into the playoffs from the Eastern Conference with three regular-season games remaining. Washington trails the Pittsburgh Penguins by one point for third in the Metropolitan Division and the Boston Bruins by three points for the first wild card.

Ovechkin, who is fourth in the NHL and leads the Capitals with 50 goals this season, has missed 24 regular-season games during his 17 NHL seasons because of injury and has never missed a playoff game. He’s sat out an additional 20 regular-season games because of suspensions and illness. He’s played 77 of Washington’s 79 games this season, sitting out two while in NHL COVID-19 protocol.

“Honestly, his style of play, you’re going to get injured,” Capitals center Nicklas Backstrom said. “But I just think mentally he’s so strong. He plays through everything. It’s just the way he is as a guy. He doesn’t miss games. And it doesn’t matter how hurt he is. He’s one of those guys you can always count on.”

So when Ovechkin misses a game, it raises a red flag. He sat out an NHL career-high 11 games last season, including four while in COVID-19 protocol and a stretch of seven out of eight with a groin injury before returning for the regular-season finale against the Bruins.

“Well, there’s always concern,” Laviolette said. “This popped up at the end of last year. We ended up dinging up some guys right at the end of the season. We were in a really good spot. We got dinged up a little bit and those things nagged in and you want to go in as healthy as you can and put your best foot forward with a healthy lineup. It was a little bit tough last year with some of the things that happened, but that’s what happens.

“So like I said, hopefully Alex returns to the lineup soon and everybody else can stay the course here, get through these games and move on to the playoffs.”

The Capitals plan to honor Ovechkin in a pregame ceremony Tuesday for a season filled with milestones. He tied the NHL record shared by Wayne Gretzky and Mike Bossy when he reached 50 goals for the ninth time during a 4-3 overtime loss to the Vegas Golden Knights on Wednesday.

Ovechkin is third in NHL history with 780 goals after passing Marcel Dionne (731) for fifth against the New York Rangers on Oct. 13, Brett Hull (741) for fourth against the Columbus Blue Jackets on Nov. 12 and Jaromir Jagr (766) for third against the Islanders on March 15. He is 21 goals behind Gordie Howe for second (801) and 114 behind Gretzky’s NHL record of 894.

“He hates not playing the game,” Laviolette said. “He hates being out, so he’s going to want to be back as soon as possible and we’re going to make sure that he’s in a good spot to do that.”