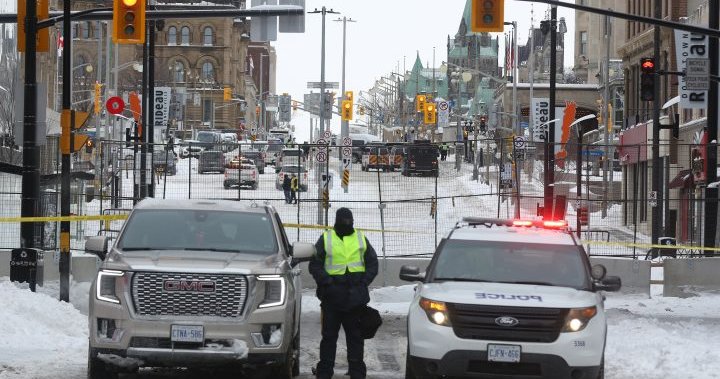 Ottawa police are bracing for another protest that is set to descend on the city’s downtown this weekend.

The force is preparing for the event, called Rolling Thunder, which could see protestors flood into Ottawa’s downtown core between April 29 and 30.

Ottawa police said protesters would arrive between Friday and Saturday.

The chair of the Ottawa Police Services Board, Coun. Eli El-Chantiry, said the protest would be a “convoy of bikers.”

To prepare for the event, the Ottawa Police Service will ban vehicles from downtown Ottawa and increase the number of officers patrolling over the weekend.

Interim Chief Steve Bell acknowledged that February’s events had caused “hurt” and said there was a need for “healing” between residents and police.

He said protesters would “be held accountable” for actions.

“We are a tired city,” Bell said. “We’ve had too much of this type of activity in and around and through our streets, particularly in the downtown core.”

He said that some of those who plan to come to Ottawa over the weekend have “identified the need to attend the war monument and re-consecrate it by laying a wreath and undo the damage that they feel may have been done to it during the convoy and the removal of that illegal occupation.”

He said it had been “extremely challenging” to identify a single reason for the protest.

“As groups have attended our city and other cities, there seems to not be one central focus or singular objective to them,” Bell said. “There are many different groups that come and congregate at the same time.”

The Rolling Thunder protest follows the “Freedom Convoy” which occupied the area around Parliament Hill for much of February.

During the event, the area was packed with people and trucks carrying signs and flags adorned with expletives directed at Prime Minister Justin Trudeau.

The protests had a major impact on Ottawa residents.

Officials described a state of “lawlessness” setting in around the area as bylaws went unenforced by police for three weeks and the sound of air horns droned on at all hours of the day and night.

Police said that, following the convoy, they had “adjusted” their approach to all demonstrations, protests, events and rallies.

Where’s ‘freedom’ from here? Canada’s convoy protests are over, but the anger remains

“As a result of the unlawful protest, the City of Ottawa’s position is that no motor vehicle protests, rallies or events will be allowed in the designated downtown core areas,” police said in a press release.

The designated area includes near Parliament Hill and the National War Memorial.

Ottawa police will also work with the Royal Canadian Mounted Police and Ontario Provincial Police to manage the event.

During a meeting of the Ottawa Police Services Board on Tuesday, Coun. Jeff Leiper admitted that there was a “trust issue” between police and residents around protest policing.

Police said that “any organizer of any event will be held accountable for their actions before, during and after events.”

Police also said they have reached out to organizers to understand plans.

“We do this for every event, from football games, to rallies, to demonstrations,” police said.

— with files from The Canadian Press