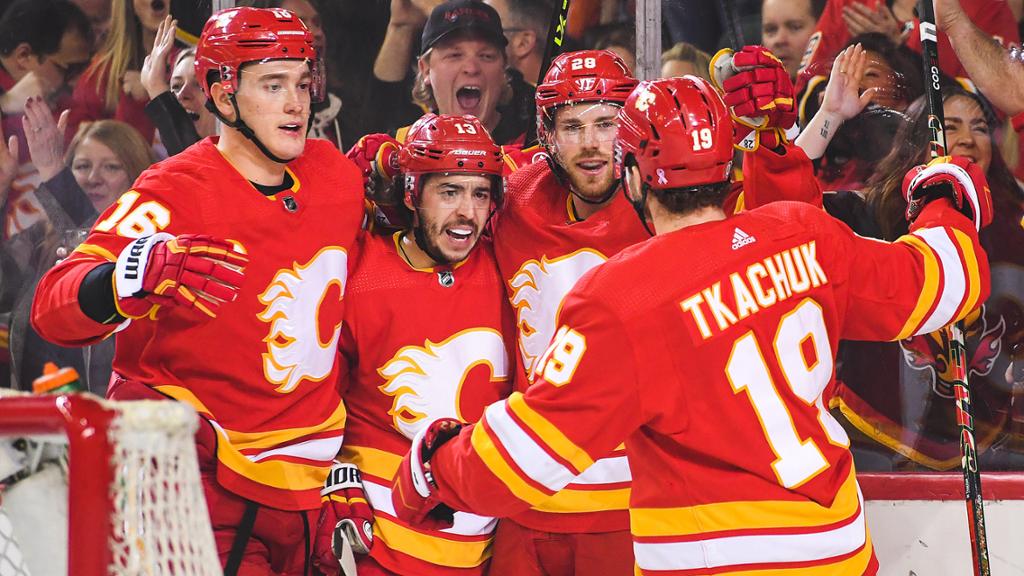 Here is a look at the NHL standings and everything else that could impact the playoff picture.

The Boston Bruins will clinch a playoff berth:

The Colorado Avalanche will clinch the top playoff seed in the Western Conference:

The Avalanche will clinch the Central Division title:

The Calgary Flames will clinch a playoff berth:

If they get at least one point against the Coyotes (10 p.m. ET; CBC, SN, SN1, CITY, TVAS2, BSAZX, ESPN+, NHL LIVE); or the Columbus Blue Jackets defeat the Los Angeles Kings in any fashion; or the Edmonton Oilers defeat the Vegas Golden Knights in regulation.

The Minnesota Wild will clinch a playoff berth:

The St. Louis Blues will clinch a playoff berth:

There are 14 games on the schedule Saturday, 12 with playoff implications.

The Predators are tied with the Dallas Stars for the first wild card into the Stanley Cup Playoffs from the Western Conference, two points ahead of the Vegas Golden Knights. The Blackhawks have been eliminated from playoff contention.

The Penguins have clinched a playoff berth and are third in the Metropolitan Division, five points behind the second-place New York Rangers and five points ahead of the Washington Capitals, who hold the first wild card from the Eastern Conference. The Bruins, who have lost three in a row, can clinch a playoff berth if they get at least one point. They hold the first wild card from the East, three points ahead of the Capitals, and trail the Tampa Bay Lightning by three points for third in the Atlantic Division.

The Rangers have clinched a playoff berth and are looking to catch the Carolina Hurricanes for first in the Metropolitan. Second-place New York trails Carolina by two points and leads third-place Pittsburgh by five points. The Red Wings have been eliminated from playoff contention.

The Wild and Blues battle for sole possession of second place in the Central Division, where they enter Saturday tied with 98 points. It will also be the end of a winning streak for one of them. The Blues have won seven in a row and the Wild have won three straight. One of the teams could clinch a playoff berth Saturday under various scenarios.

The Capitals, whose four-game winning streak ended with a 7-3 loss against the Toronto Maple Leafs on Thursday, hold a 13-point lead over the New York Islanders for the second wild card from the East and are three points behind the Bruins for the first wild card. The Canadiens have been eliminated from playoff contention.

The Maple Leafs have won three of their past four games and have a four-point lead over the Lightning for second place in the Atlantic. The Senators have been eliminated from the playoffs.

The Jets have won two in a row and will have Blake Wheeler back in the lineup after the forward missed three games with an upper-body injury. Winnipeg trails Nashville and Dallas by eight points for the two wild cards from the West. The Lightning are third in the Atlantic, four points behind the second-place Maple Leafs and three ahead of the fourth-place Bruins.

The Stars are 3-1-2 in their past six games and will try to gain sole possession of the first wild card from the West, where they are tied with the Predators. The Sharks were eliminated from playoff contention with their 5-4 shootout loss to the Blackhawks on Thursday.

The Hurricanes clinched a playoff berth and are first in the Metropolitan, two points ahead of the second-place Rangers after their 3-0 loss to the Red Wings on Thursday. The Avalanche clinched a playoff berth, won eight in a row and have a 16-point lead over the second-place Blues and Wild in the Central. Colorado can clinch first in the division and the top playoff seed in the Western Conference if they win in any fashion.

The Flames, who are first in the Pacific, will try to clinch a playoff berth after failing to do so in a 6-1 loss to the Golden Knights on Thursday. If they get a point against the Coyotes, the Flames will reach at least 100 points for the second time in the past four seasons (107 points in 2018-19). The Coyotes have been eliminated from the playoffs.

The Kings will try to hold off the Golden Knights, who are two points behind them for third in the Pacific. Los Angeles is four points behind Edmonton for second in the division. The Blue Jackets are 16 points behind the Capitals for the second wild card from the East and will be eliminated from playoff contention if they do not win in regulation or if Washington gets at least one point against Montreal.

If the playoffs started Saturday

Here is a look at the matchup for the first round as they stand entering games Saturday:

There were two games Friday, each with playoff implications:

New York Islanders 3, Montreal Canadiens 0: Ilya Sorokin made 44 saves for his seventh shutout of the season, tying an Islanders record (Semyon Varlamov in 2020-21 and Glenn Resch in 1975-76). The Islanders are 13 points behind the Capitals for the second wild card into the playoffs from the Eastern Conference. Carey Pricemaking his first start since Game 5 of the Stanley Cup Final on July 7, had 17 saves for the Canadians, who are eliminated from playoff contention.

Florida Panthers 6, Winnipeg Jets 1:Forward Jonathan Huberdeau and defenseman Gustav Forsling each scored two goals for the Panthers, who lead the Atlantic Division by 10 points over the second-place Toronto Maple Leafs. The Jets remain eight points behind the Nashville Predators and Dallas Stars for the two wild cards from the Western Conference.