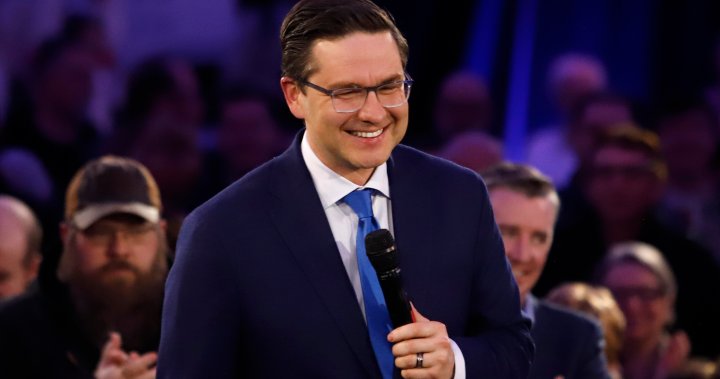 The Conservative Party is moving to ban the use of pre-paid credit cards to purchase memberships after Pierre Poilievre warned they could be used to fraudulently buy the leadership.

The party quickly reversed its position on the use of pre-paid credit cards Thursday, after the Poilievre camp demanded they be banned and the party cancel any memberships purchased with them since Feb. 2.

“The party (and the Conservative Fund) will not be accepting pre-paid cards for membership or donations for this leadership race,” wrote Wayne Benson, the party’s executive director, in a memo to leadership campaigns obtained by Global News.

Benson said the party will be canceling memberships purchased with pre-paid cards back to Feb. 2, as the Poilievre camp demanded.

“Soon we will be issuing instructions to campaigns on a collaborative plan to resolve legitimate memberships that are canceled as a result of this retroactive change.”

It was a major reversal for the party, which on Monday told the leadership campaigns that it would continue to accept pre-paid cards. Benson gave no reason in his memo for the reversal.

Reached for comment Thursday evening, Benson told Global News he had nothing to add to the memo.

On Tuesday, Global News reported that the Poilievre campaign sent a lawyer’s letter to Conservative Party brass warning about potential membership fraud through the use of pre-paid credit cards.

To join the Conservatives – and be eligible to choose its next leader – Canadians need to cut a $15 check or credit card payment to the party. The use of pre-paid credit cards to purchase memberships have been a perennial concern, for fears a leadership campaign could purchase “fake” memberships and tilt the contest’s scales.

The Poilievre camp did not offer any evidence of fraud, but it heavily hinted they were concerned about Brampton Mayor Patrick Brown, who had previously liked purchasing memberships to “jaywalking.”

A spokesperson for the Brown campaign said Thursday that they were “not accepting memberships using pre-paid cards” and that the move does not “affect our sales” of memberships.

But Jeff Silverstein said the fact the party is making “retroactive rule changes” at Poilievre’s request “is interesting.”

“The Poilievre campaign will be disappointed to know they will not be able to disqualify any of our sign-ups,” Silverstein wrote in a statement to Global News.

“Patrick Brown’s campaign is focused on signing up thousands of new Conservative Party members as opposed to Team Poilievre, who are looking for ways to disqualify Canadians from participating.”

It does not appear that Poilievre was the only candidate concerned about prepaid cards, however. One Conservative leadership source, not affiliated with Poilievre’s campaign, told Global News that the move was “good news for election fairness and membership list integrity.”

Conservative leadership hopefuls have until the end of the month to submit $300,000 in fees and guarantees to end up on the ballot, and until June 2 to sign up members to vote for them. The next Conservative leader will be chosen on Sept. 10.