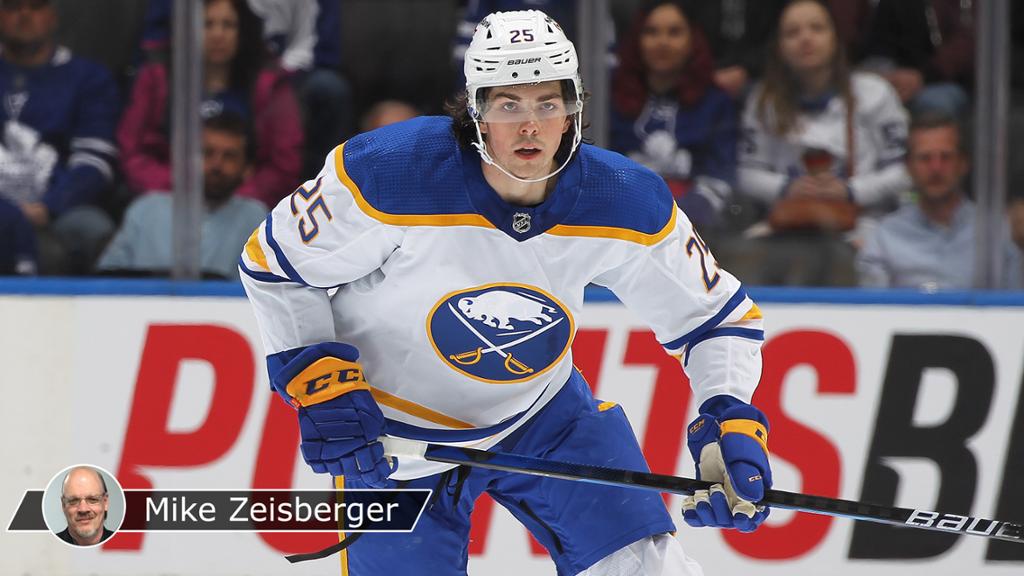 TORONTO — Owen Power was being swarmed.

The Buffalo Sabers defenseman had just played his first NHL game, a 5-2 victory against the Toronto Maple Leafs on Tuesday, and was in Section 117 at Scotiabank Arena where about 100 friends and family were there to greet him. There were hugs aplenty for the young defenseman from nearby Mississauga, and chants of “MVP, MVP” echoed throughout the building from the giddy throng.

The 19-year-old played 19:50, with one hit, one blocked shot, one takeaway and finished with a plus-two rating. All in all, a successful evening’s work.

At the same time, not every night is going to be as fulfilling as this one was. Just ask Rasmus Dahlinwho was quietly walking to the team bus while Power’s entourage was going crazy up in the stands.

“Great night for him, wasn’t it?” the Sabers defenseman said. “He was very impressive.

“If I had any advice for him, I’d tell him to just be patient. Defense is a difficult position to play. You aren’t going to put up the points right away like you might be accused to. There is a lot to learn.

“There is no rush. There will be growing pains.”

If anyone would know about that, it’s Dahlin. In fact, he might be one of the biggest factors in Power’s development over the next few seasons.

Because he’s already been through what Power is experiencing now.

Dahlin, the No. 1 pick in the 2018 NHL Draft, turned 22 Wednesday and got an early start on birthday celebrations by scoring a goal and an assist against the Maple Leafs. He’s already played 270 NHL games, scoring 153 points (28 goals, 125 assists) and showing poise in almost every aspect of his game.

It wasn’t always like that. Because of his lofty draft status, he faced the pressure of immediately being a perceived savior for a Sabers franchise that hasn’t qualified for the Stanley Cup Playoffs since 2011.

Now here comes Power, fresh off a successful career at the University of Michigan that has left expectations high, much in the same way they were for Dahlin. Like Dahlin, Power was a No. 1 pick, selected by the Sabers in the 2021 NHL Draft.

Power admits Dahlin is a resource he can turn to on or off the ice when the walls start closing in. After all, as a fellow No. 1 pick, Dahlin understands what the kid can expect ahead of him.

He won’t have to go far to do that, if the seating arrangement in the Sabers dressing room Tuesday becomes permanent. The defensemen were in adjoining cubicles, giving Dahlin a great vantage point to see Power presented by teammates with the ceremonial saber for being the player of the game.

“I think you do forget, because Rasmus is already in his fourth season, that he’s just turning 22,” Sabers general manager Kevyn Adams said. “I think that, besides the on-ice stuff, just the day-to-day expectations he’s felt over those years, it’s just going to help Owen in his transition because Rasmus can relate.

“And, add to that that Rasmus is an all-in team guy and he really cares about his teammates. So he wants to see Owen succeed. So I’m really excited about that.”

From his perch in the Scotiabank press box Tuesday, Adams didn’t need much time to see what Power can do on defense.

Early in the first period, Power found himself the lone man back on a 2-on-1 of Mark Giordano and Auston Matthews. He played it perfectly, deflecting away the cross feed from Giordano to hold Toronto without a shot on the play.

Asked about what was going through his mind on one of the first shifts of his NHL career, Power replied: “Don’t let Matthews get the puck.”

So did Power’s family.

“I knew he could handle him,” Yvonne Power said.

Yvonne is 92 years young. She is Owen’s grandmother. Not only was she thrilled to see her grandson’s NHL debut, she received a certificate from Maple Leafs Sports & Entertainment for attending a game at Scotiabank Arena for the first time.

“It was a dream come true,” Yvonne said.

For many Sabers fans, seeing a Buffalo defense anchored by youngsters Dahlin and Power for years to come might have them feeling the same way.