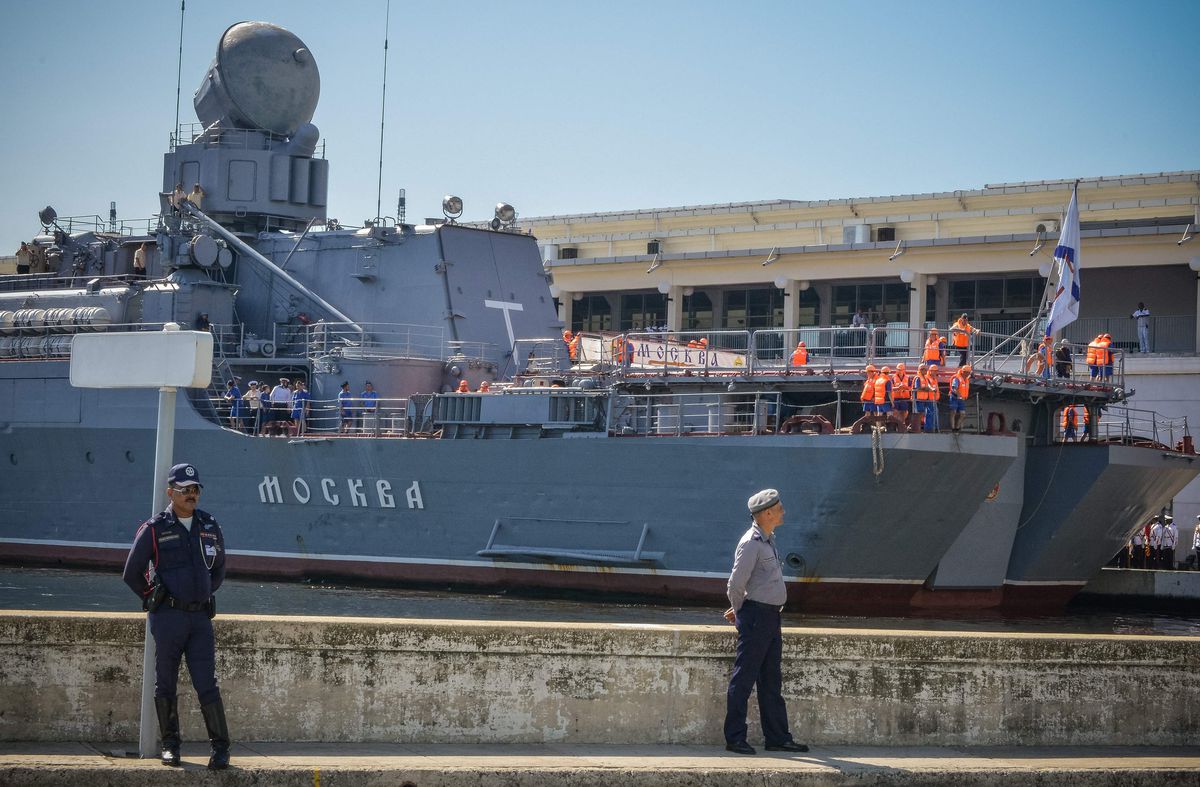 Russia said on Thursday the flagship of its Black Sea fleet was seriously damaged and its crew evacuated following an explosion that a Ukrainian official said was the result of a missile strike.

It did not say what caused the fire but Maksym Marchenko, the Ukrainian governor of the region around the Black Sea port of Odesa, said the Moskva had been hit by two Ukrainian-made Neptune anti-ship cruise missiles.

Ukraine’s defense ministry did not respond to a request for comment and Reuters was unable to verify either side’s claims.

Fight for Mariupol not over, commander of foreign legion says, despite Russian claims more than 1,000 Ukrainian marines surrendered

The Moskva is the second major ship known to have suffered serious damage since the start of the war. Last month Ukraine said it had destroyed a landing support ship, the Orsk, on the smaller Sea of ​​Azov.

Russia’s navy has launched cruise missiles into Ukraine and its activities in the Black Sea are crucial to supporting land operations in the south of the country, where it is battling to seize full control of the port of Mariupol.

Russian news agencies said the Moskva, commissioned in 1983, was armed with 16 anti-ship Vulkan cruise missiles with a range of at least 700 km (440 miles).

Russia said 1,026 soldiers from Ukraine’s 36th Marine Brigade, including 162 officers, had surrendered in Mariupol and that the city was fully under its control. Ukraine’s defense ministry spokesman said he had no information about a surrender.

Capturing the Azovstal industrial district where the marines have been holed up would give Russia control of Ukraine’s main Sea of ​​Azov port, reinforce a southern land corridor and expand its occupation of the country’s east.

“Russian forces are increasing their activities on the southern and eastern fronts, attempting to avenge their defeats,” President Volodymyr Zelenskiy said in a Wednesday night video address.

Reuters journalists accompanying Russian-backed separatists saw flames billowing from the Azovstal area on Tuesday, a day after Ukraine’s 36th Marine Brigade said its troops had run out of ammunition.

The United States said on Wednesday it would send an extra $800 million worth of military hardware to Ukraine including artillery, armored personnel carriers and helicopters. France and Germany also pledged more.

Senior US officials are weighing whether to send a top cabinet member such as Secretary of State Antony Blinken and Defense Secretary Austin Lloyd to Kyiv in a show of solidarity, a source familiar with the situation said.

It will impose tit-for-tat sanctions on 398 members of the US House of Representatives and 87 Canadian senators, Interfax cited the foreign ministry as saying, after Washington targeted 328 members of Russia’s lower house of parliament.

Fiji said it was investigating the arrival of the superyacht Amadea, owned by Russian billionaire Suleiman Kerimov, who has been sanctioned by the United States, Britain and the European Union.

Ukraine says tens of thousands of people are believed to have been killed in Mariupol and accuses Russia of blocking aid convoys to civilians marooned there.

Its mayor, Vadym Boichenko, said Russia had brought in mobile crematoria “to get rid of evidence of war crimes” – a statement that was not possible to verify.

In the village of Lubianka northwest of Kyiv, from where Russian forces had tried and failed to subdue the capital before being driven away, a message to Ukrainians had been written on the wall of a house that had been occupied by Russian troops.

“We did not want this…forgive us,” it said.

The Kremlin says it launched a “special military operation” to demilitarize and “liberate” Ukraine from nationalist extremists, a message villagers said had been repeated to them by the Russian troops.

Polish President Andrzej Duda said on a visit to Kyiv with his Lithuanian, Latvian and Estonian counterparts that those who had committed and ordered crimes must be brought to justice.

Germany’s president did not join them as he had planned. Zelenskiy denied a newspaper report he had rejected the visit due to Steinmeier’s recent good relations with Moscow.

The Kremlin denounced President Joe Biden’s description of Moscow’s actions in Ukraine as amounting to genocide, with spokesman Dmitry Peskov saying this was unacceptable coming from the leader of a country he said had committed crimes of his own.

An initial report by a mission of experts set up by the Organization for Security and Cooperation in Europe documents a “catalogue of inhumanity” by Russian troops in Ukraine, according to the US ambassador to the OSCE.

The Kyiv district police chief said 720 bodies had been found in the region around the capital from where Russian forces had retreated, with more than 200 people missing.

Ukrainian President Volodymyr Zelensky said on Wednesday in an address to Estonia’s parliament via teleconferencing that Russia was using phosphorous bombs in Ukraine, accusing Moscow of using terror tactics against civilians.