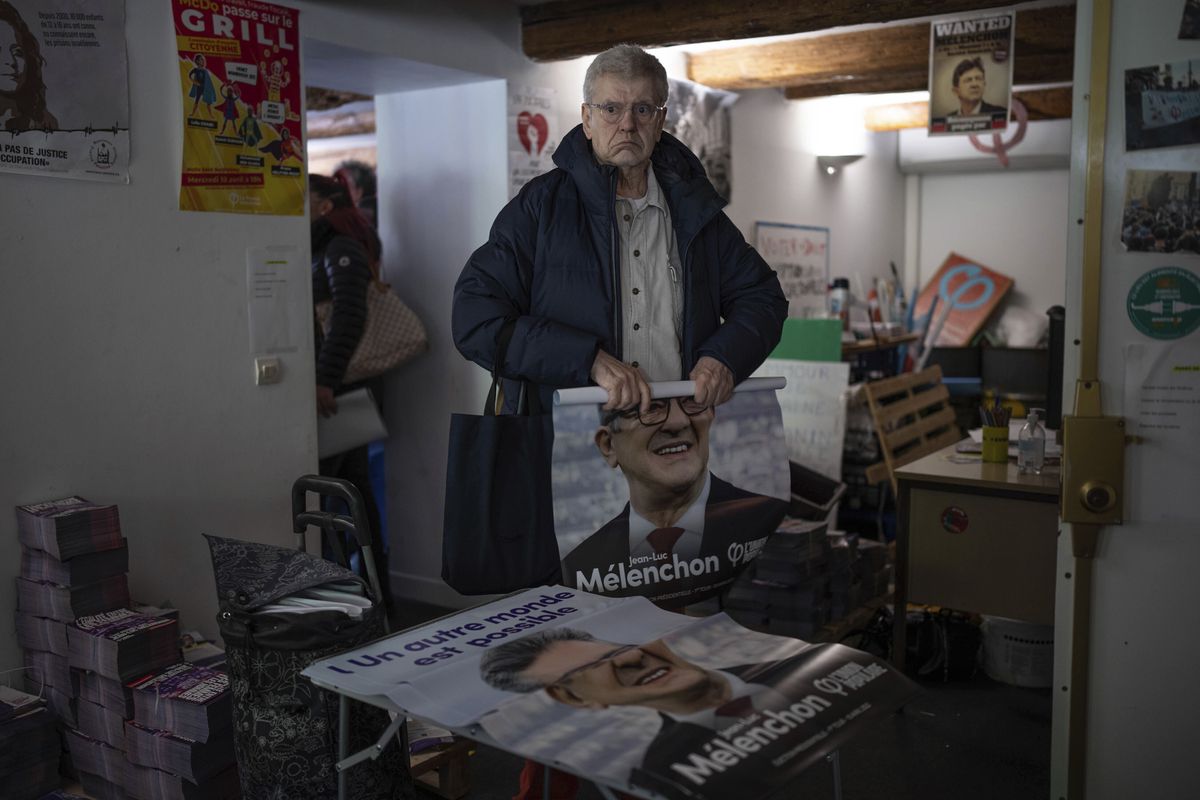 Incumbent Emmanuel Macron will face far-right nationalist Marine Le Pen in a winner-takes-all runoff for the French presidency after they both advanced Sunday in the first round of voting in the country’s election to set up another head-to-head clash of their sharply opposing visions for France.

Polling agency projections and a partial official count of votes showed France teeing up a repeat of the 2017 runoff that made Mr. Macron the country’s youngest-ever president – ​​but with no guarantee this time that the outcome will be the same.

Addressing his supporters who chanted “five more years,” Mr. Macron warned that “nothing is done” and said the next two weeks of campaigning for the April 24 second-round vote will be “decisive for our country and for Europe.”

Claiming that Ms. Le Pen would align France with “populists and xenophobes,” he said: “That’s not us.”

“I want to reach out to all those who want to work for France,” he said. He vowed to “implement the project of progress, of French and European openness and independence we have advocated for.”

The election outcome will have wide international influence as Europe struggles to contain the havoc wreaked by Russian President Vladimir Putin’s invasion of Ukraine. Mr. Macron has strongly backed European Union sanctions on Russia while Ms. Le Pen has worried about their effect on French living standards. Mr. Macron also is a firm supporter of NATO and of close collaboration among the European Union’s 27 members.

With two-thirds of votes counted, Mr. Macron and Ms. Le Pen had pulled comfortably clear of hard-left leader Jean-Luc Mélenchon, out of the two-candidate runoff in third place.

Mr. Macron, a 44-year-old political centrist, won by a landslide five years ago but he is bracing for a far tougher second round against his 53-year-old political nemesis. Ms. Le Pen is promising seismic shifts for France – both domestically and internationally – if elected as the country’s first woman president.

Mr. Macron for months had looked like a shoo-in to become France’s first president in 20 years to win a second term. But National Rally leader Ms. Le Pen, in a late surge, tapped into the foremost issue on many French voters’ minds: the soaring costs for food, gas and heating because of rising inflation and the repercussions of Western sanctions on Russia.

Polling agency projections put both Mr. Macron and Ms. Le Pen on course to improve their 2017 first-round showings, highlighting how French politics have become increasingly polarized. Mr. Macron was expected to capture a sizable first-round lead of around 28 per cent support, ahead of Ms. Le Pen’s projected 23 per cent-24 per cent of the vote. Mr. Mélenchon was credited with about 20 per cent support.

Both Mr. Macron and Ms. Le Pen now need to reach out to voters who backed the 10 presidential candidates defeated on Sunday to win in Round 2.

“The French people honored me by qualifying me for the second round,” Ms. Le Pen said. Her supporters celebrated with champagne and interrupted her speech with chants of “We’re going to win!”

Yet some of her defeated rivals were so alarmed by the possibility of Ms. Le Pen beating Mr. Macron that they urged their supporters Sunday to shift their second-round votes to the incumbent. Mr. Mélenchon, addressing supporters who sometimes shed tears, repeatedly said: “We must not give one vote to Mrs. The pen.”

Describing herself as “profoundly worried,” defeated conservative candidate Valérie Pécresse warned of “the chaos that would ensue” if Ms. Le Pen was elected, saying the far-right leader has never been so close to power. Ms. Pécresse said she would vote for Mr. Macron in the runoff.

Pollsters suggest that just a few percentage points could separate the familiar foes in the second round. The runoff campaign is likely to be far more confrontational than Round 1, which was largely overshadowed by the war in Ukraine.

After Ms. Le Pen dropped off her blue ballot envelope in the northern town of Henin-Beaumont, she said “given the situation in the country and in the world,” the election outcome could determine “not only the next five years, but probably the next 50 years” in France.

In the 27-member EU, only France has a nuclear arsenal and a UN Security Council veto.

To beat Ms. Le Pen in the runoff, Mr. Macron must pick apart her years-long rebranding effort to make herself seem less extreme, a makeover that has even highlighted her love of cats. Mr. Macron has accused Ms. Le Pen of pushing an extremist manifesto of racist, ruinous policies. Ms. Le Pen wants to roll back some rights for Muslims, banning them from wearing head scarves in public, and drastically reducing immigration from outside Europe.

Her softer image has won over some voters but made others even more suspicious.

Yves Maillot, a retired engineer, said he voted for Mr. Macron only to counterbalance Ms. Le Pen. He said he fears that her long-standing hostility to the EU could see her try to take France out of the bloc, even though she’s dropped that from her manifesto.