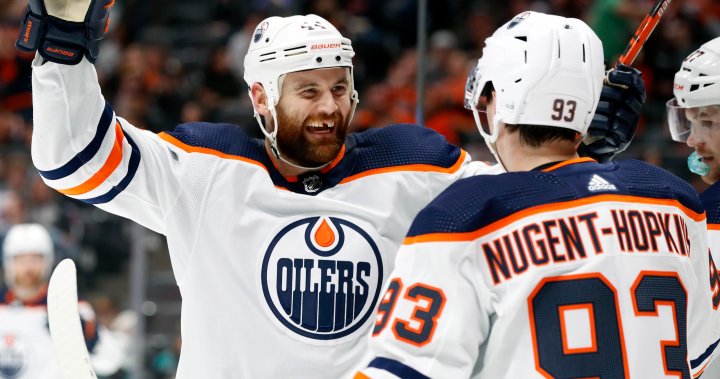 Leon Draisaitl scored his 50th goal of the season Sunday night as the Edmonton Oilers cruised to a 6-1 win over the Anaheim Ducks.

The Oilers jumped on the Ducks early, with Tyson Barrie’s point shot eluding John Gibson just before the game turned five minutes old. The Oilers won a face-off on a power play and Connor McDavid promptly sniped his 40th to make it 2-0. Ryan Nugent-Hopkins struck for his ninth later in the first.

Jesse Puljujarvi found the puck in front and outwaited Gibson before roofing his thirteenth to make it 4-0 early in the second.

The Ducks got on the board 3:16 into the third when Zach Aston-Reese fired a rebound past Mike Smith. Brett Kulak picked up his first an Oilers when his point shot went through Gibson and trickled over the goal line. Draisaitl picked up an assist on the play for this 100th point of the season.

Prior to the game, the Oilers announced goalie Mikko Koskinen was out with a non-COVID illness. Stuart Skinner was called up on an emergency basis to back-up Smith.

McDavid had three points to extend his point streak to 13 games while Draisaitl took his streak to 12.

The Oilers, 40-25-5, will continue their road trip Tuesday in San Jose.