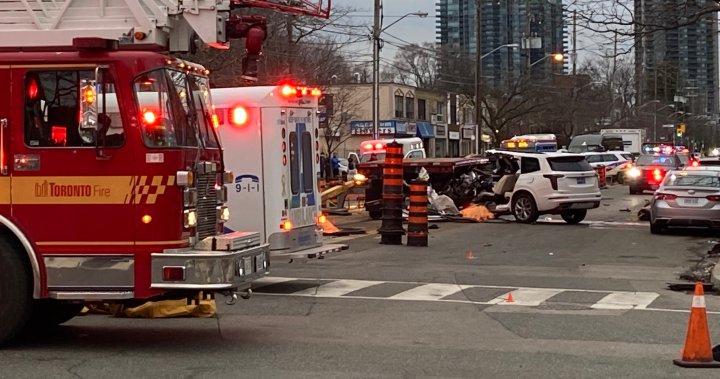 The latest version of this story can be found here.

Three people are dead, including two pedestrians, after what police say appears to be a high-speed collision in Toronto’s Mimico neighborhood.

Emergency crews were called to the area of ​​Lake Shore Boulevard West and Superior Avenue shortly after 5:30 pm Thursday for reports of two pedestrians struck by a white SUV.

Investigators confirmed that two pedestrians and the driver were all killed in the collision. They have not released their ages or genders as they are in the process of notifying next of kin.

Pedestrian hospitalized after being struck by vehicle in Vaughan, Ont: police

Detective Scott Matthews told Global News that the driver was driving at a high rate of speed eastbound on Lake Shore Boulevard West.

The detective said the driver sped through the intersection at Superior Avenue — on a red light — striking the two pedestrians who had the right of way.

The driver continued driving then hit a parked flatbed truck that was part of a construction site at the other end of the intersection and was possibly ejected, police said.

The video shows firefighters speaking to the driver of a white SUV, who then manages to get into the vehicle and drive off.

Police said they are looking at the video to see if it is connected to the deadly crash.

— with files from Katrina Ramlochan and Morganne Campbell